Share All sharing options for: This Month in New York City Dining, 1994

Occasionally, we like to look back on other periods of New York dining. Here now is a rundown of what was abuzz in the city 17 years ago: October of 1994. 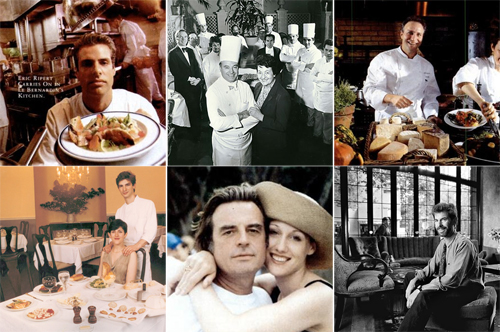 Dining News: Lutece, Cub Room, Chanterelle, and Lespinasse
Sullivan Street hot spot Cub Room expanded into the old Elephant & Castle space next door for a casual spinoff called Cub Room Cafe. Elsewhere downtown, Chanterelle in Tribeca introduced Monday night service, much to the delight of its regulars. But perhaps the biggest news of the month was that Andre Soltner had sold his French gem Lutece to the Ark restaurant group.

Many were baffled by the deal, especially because Ark's other properties were mostly cheesy theme restaurants. Andre was quick to note that the deal wouldn't change the day-to-day operations at Lutece, but that it might make things easier for him and his wife. Andre told Ruth Reichl:

You know, we have never missed a day. And then there's all the office work: the insurance, the computer repairmen....I asked them what would happen if the computer broke down. They said they would buy a new one. So I can spend my time in the kitchen.

Soltner lived above the restaurant and visited it frequently after the sale, but his presence diminished over the years. After some big staff shuffles and a few menu overhauls, the restaurant finally closed in 2004.

This month in 1994, Lespinasse reopened from its summer vacation with a $1 million state-of-the art kitchen, designed by chef Gray Kunz. The entire space was built to make working conditions better for the chefs, and to make the cooking and plating faster and smoother. The chef remarked, "There is no reason today why kitchens can't be pleasant places to work in." Elsewhere in the restaurant design universe, American Renaissance Restaurant in Tribeca installed Mitsubishi television screens above the urinals in the men's bathroom. Trendwatchers noticed the growing influence of Italian cuisine at the city's French fine dining restaurants (Sirio Maccioni was partly to blame for this). And David Edelstein penned a guide to New York's emerging brewpub scene.

In October of 1994, Ruth Reichl reviewed the white-hot Gramercy Tavern, then with Tom Colicchio in the kitchen. She awarded it two stars, noting: "Each meal I have eaten has been better than the one before; a year from now, Gramercy Tavern may well have turned into the restaurant of its owners' dreams." Ruth was dazzled by much of the food at Nobu, but ultimately concluded: "it seems as if it is still in rehearsal, a promise of the restaurant it will become." Ms. Reichl also awarded one star to Gigino in Tribeca and two stars to Midtown French classic Le Perigord. New York noticed that Ruth had actually been handing out a lot of deuces in her first year as critic, and put together a handy chart to show her star distribution.

This month, Gael Greene also visited Gramercy Tavern and Nobu. Of the former, she remarked that Colicchio was "cooking in a straightjacket, holding back his usual brilliance." She found the food at the latter "Avant-garde, to be sure, and a tad La Cienega, but almost always soul-stiring." Ms. Greene also recommended L'Udo on Lafayette.

[Photos: New York]
New York ran a sensational profile of Gilbert Le Coze, the original chef and proprietor of Le Bernardin. He died, suddenly, in July of 1994 at the age of 48. Although Le Coze had settled down with girlfriend Amy Sacco, in his younger days he was quite the ladies man:

Imagine Jean-Paul Belmondo with a saucepan, in tight white jeans rather than a motorcycle jacket. Women pursued Le Coze as if he were a movie star. At the restaurant, his sister, Maguy, who ran the dining room, watched with astonishment as women snuck away from their husbands or dates and slipped their phone numbers into his pocket.

In the same issue of New York, Gael Greene reviewed Le Bernardin, then with 29-year-old Eric Ripert at its helm. She found some strange new energy in the dining room, but concluded: "Le Bernardin is not fated to be a mausoleum. It was and is a celebration."

[The Cub Room, Larry Bogdanow in the Cub Room ]
The Times dropped a Q & A with Larry Bogdanow, the architect and designer responsible for the dining rooms at Union Square Cafe, Savoy, and restaurant-of-the-moment Cub Room. When asked why he liked to design cozy spaces, Larry responded: "Modern life is uncomfortable, hurried, noisy. The domestic environment should be comfortable so you can relax, lean back, think." Bogdanow passed away earlier this year at the age of 64.