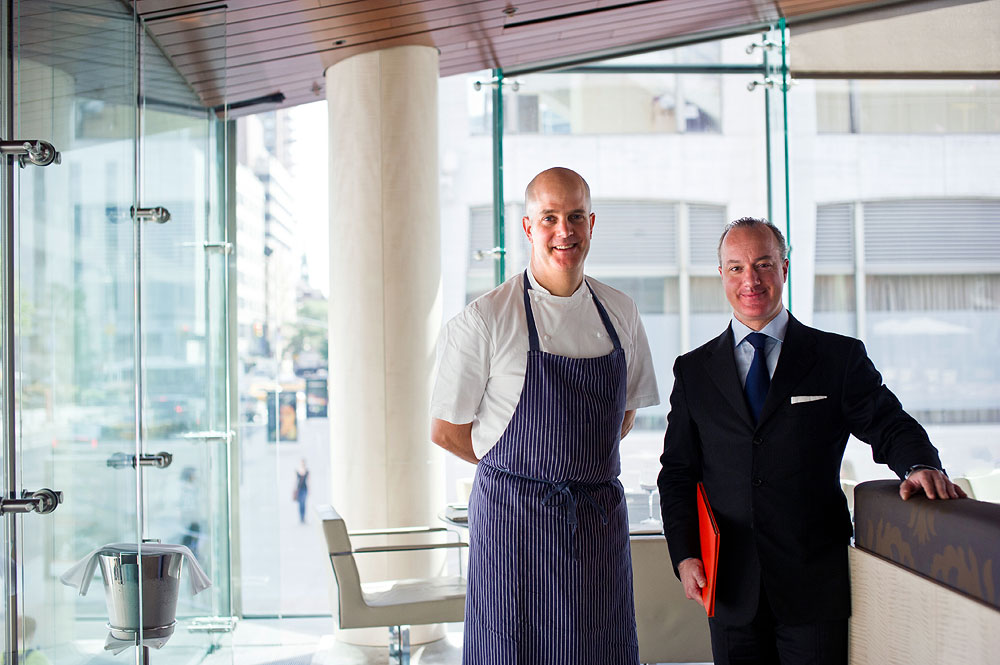 Last September, the Patina group and former Per Se chef Jonathan Benno opened Lincoln, their highly anticipated $20 million Italian restaurant at Lincoln Center. Although it received mostly good reviews, there were no full-on raves, and a few critics had a hard time connecting with the food and the dining room. These days, business is booming, and some critics are suggesting that Lincoln may have finally found its groove. We recently chatted with chef Benno and Restaurant Director Paolo Novello about the reviews, the changes over the last year, and the road ahead.

When was the first time you started talking about this project? Jonathan Benno, Chef: Well, it was almost two and a half years ago. I actually met with [Patina Group founder] Joaquim Splichal first, and learned a little bit more about the project, and then started discussions with [Patina CEO] Nick Valenti. This building is now six years in the making, and when Paolo and I came to the project two years ago, much of the design work was already done. Originally, this was going to be the New York version of Patina in Los Angeles, a very grand restaurant. It still is a very grand restaurant, but during the recession Mr. Valenti and Mr. Splichal realized that the concept needed to change, and that's right about the time that Paolo and I were introduced to the project. When we collectively agreed to move forward together with an Italian restaurant, much of what you see in the dining room was already designed. We had to make some changes to the kitchen and there were some subtle things that changed, but a lot of the design work was done already.

What was the menu planning process like? JB: The challenge was, and still is, to take what is a very traditional cuisine and bring it to this very beautiful, very modern setting. So, how do you prepare the best eggplant parmesan you can, and serve it in this very beautiful, very modern setting? That's what Paolo, myself, and the kitchen team continue to work on today. Taking very traditional Italian cuisine, and taking the best ingredients we can find from Italy, the best ingredients we can find locally, and I don't want to say reinterpreting, but putting our own touch on the classics.

How was the opening? JB: We learned a great deal and much has changed, much has evolved over the course of the past year. I speak for myself, but I'm very, very proud of the staff, first of all. Second of all, the cuisine and the service that we deliver daily. Paolo Novello, Restaurant Director: We have learned the life of Lincoln Center. We've been here now for two Fashion Weeks, we've been here for two seasons at The Met. It's been tremendous for us as a learning tool. Being able to adapt the products to the different cycles of life at Lincoln Center, and listening to the guests, and getting feedback, whether it's sizes, or presentation, or flavors, or even the service — it's been tremendous.

How did you react to the reviews? PN: We got reviewed in the first month and a half, so we got reviewed very early and it was a very intense time for the restaurant. Changes have been ongoing since the beginning. It's been constant. You just have to be open and take every review with a pinch of salt, internalize it, and not take it personally, and change what you need to change. And it's not just the reviews — it's the guests at the table that keep coming back. One thing that makes me very happy is that there are a number of guests, not just because of the proximity of the opera houses, but people who come back regularly to the restaurant, and enjoy it as a destination restaurant.

Some critics took issue with the price in relation to the portion size and quality of a few dishes. How did you react to that? JB: As Paolo said, there was a lot to be learned from those early reviews, and some of that feedback we took, and made changes at the restaurant. Portion sizes changed, prices changed, and we adapted dishes.

Six months after opening, how had Lincoln changed? JB: It's hard to put a time frame on it. We learned a lot, initially, we made changes, and I think the menu and the restaurant have evolved. The dining room team has gotten more experienced and more comfortable with each other, the space, and our guests. And, the kitchen team is a lot stronger now, they have a lot more confidence in what we're doing. Also, we've grown more comfortable with the different service periods — we do lunch, we do brunch on the weekends, we do pre-theater, we do post-theater, and we do what we call, "normal restaurant time," between 7:30 and 10 o'clock. So we get that big hit pre-theatre, then it's normal destination dining, and then most nights we get busy between 10 and 10:30, when the houses let out. PN: It's a very large restaurant — we have 150 seats on the dining room floor alone. So dealing with the ability to do volume on a very big level, it took a moment to get there.

Has the vision of the restaurant changed over the last year? JB: I think the restaurant will continue to evolve. The goal at any restaurant that I've ever worked at is to always try to do things a little bit better. The service can always get a little more refined and friendlier on the hospitality side. And from my perspective, with the food you always look to do things just a little bit better. We have the luxury here of printing the menu every day, so we can always change the menu, which is great. And there's a great scene locally, with the market. We can run a dish for a couple of weeks, and then the apricot or the broccoli disappears and so does the dish. And that's one of the most gratifying things about being a cook. You're always learning, you're always striving to come up with better ways of doing things to put something out in the dining room that you're really, really proud of.

What is your favorite thing on the menu right now? JB: Tripe. It doesn't sell very well, but we have it on the menu because I really like it and I like to make it. We just started doing a new one recently. I mean that's a real cold weather dish, and it will certainly be on for the winter.