Share All sharing options for: Is the Historic Old Bridge Cafe Haunted?

Around this time of the year, we love to hear industry ghost stories. Here's one last one, about the Bridge Cafe. 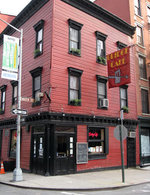 The Bridge Cafe, located in the historic Seaport District, is arguably the oldest restaurant in Manhattan, so it's not surprising that people would believe a spot like this to be haunted. Ghosts are known for inhabiting spaces that hold violent memories, and with Bridge Cafe's rowdy history of pirates and prostitution (it was formerly a brothel) it's no wonder that some think this space is a cesspool for spirits. There have been strange footsteps when no one seems to be around, unexplained smells.

According to their website, the Bridge Cafe has been investigated by Staten Island's own Eastern Paranormal Investigation Center, however, their investigation was inconclusive. Besides this, there are still rumors that the restaurant, which dates from 1794, harbors spirits. Do let us know if you've encountered ghosts at the Bridge Cafe of elsewhere and have a happy Halloween.
· All Editions of Haunted New York [~ENY~]