Share All sharing options for: Three Dish Sketches From The Modern's Gabriel Kreuther

Gabriel Kreuther's best dishes at The Modern use luxury ingredients in ways that you might not have seen before. Visually, they incorporate strong lines and bold color combinations, kind of like the art that's hanging in the museum right next door. Here are sketches of three dishes, with notes from the chef: 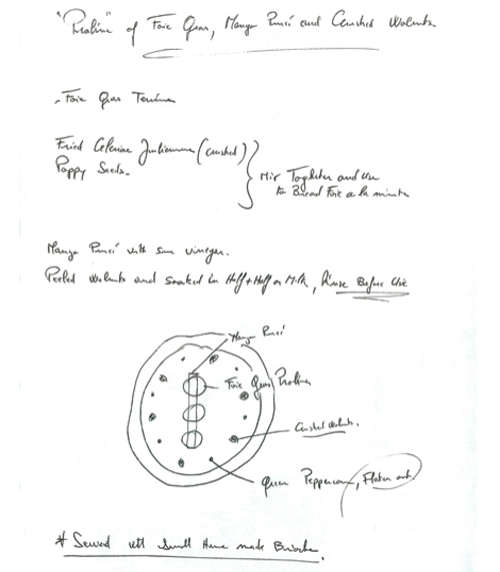 "I just wanted to do a foie gras that is intriguing, different, and interesting, basically. So, we're going into the fall season with foie gras, truffles, and celeriac that is fried to bring out the earthiness and the caramelization. Underneath is the mango puree has that acidity that's different, and there's some texture there too. It's crunchy and interesting. We just put these on the menu a week ago. 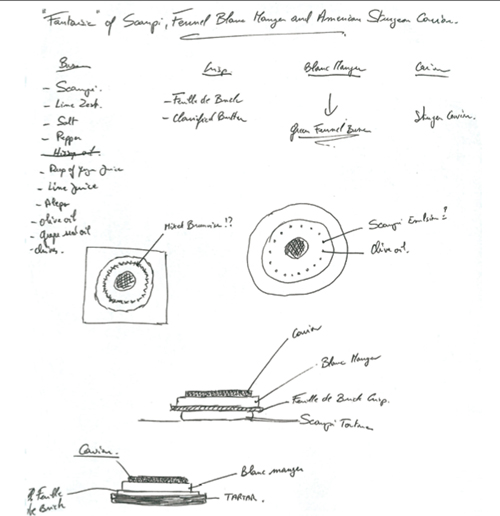 "I had some people from Japan that came to see me that produce whiskey — Suntory Whiskey. They had a fun idea to serve drinks made with whiskey with a dish that matches well. So, I had a tasting with them, and then this is what I came up with. It's langoustines, and having it as a tartare brings out the sweetness of the fish. And then the fennel brings out a little bit of the anise leaves. To finish, there's caviar on top. 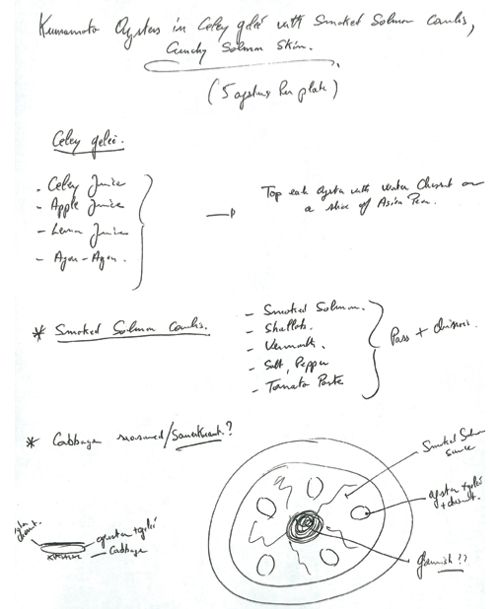 "Sometimes you do oysters en gelée, in the shell. I wanted to do something like that but without the shell at all, and serve it as a dish where you can just eat it with a spoon, kind of as a nice big bite — it explodes in your mouth. So, that's what I did, actually, and then I used Boston lettuce to wrap them, because it's so thin and it doesn't change much of the taste. Inside, you have a Kumamoto oyster, a traditionally mignonette that's gelified, and then Champagne gelée on top of the oyster. So, on the bottom is vinegar, on top is Champagne, and then the smoked salmon coulis. And then you eat it, and it pops."