Share All sharing options for: Taavo Somer and William Tigertt of Peels 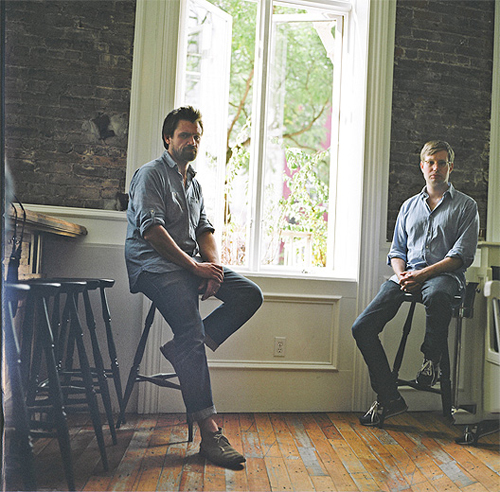 With Peels, William Tigertt and Taavo Somer wanted to create a restaurant that was brighter and more accessible than their first project, Freemans. It's located on a stretch of the Bowery that gets a lot of foot traffic, and the space has plenty of windows, big booths, and clean white walls. Peels was pretty much a hit right out of the box, but Tigertt and Somer have made a lot of tweaks since opening last fall.

When was the first time you discussed this project? William Tigertt: It was probably August of 2009. Taavo Somer: I was walking my dog over by Freemans, and I ran into the landlord of the Peels space. I knew him from seven years ago, when I did some architectural work for him — he had a building on Allen Street. So, he asked me if I knew anyone who was looking for a restaurant space, and then he said that it was Kelly & Ping. I used to live on the corner of 2nd and 2nd, so I've always loved this space.

Had you talked about doing a follow-up to Freemans? WT: Well, we have a lot of stuff going on — there's a clothing company and a barber shop — and we kept on expanding Freemans. I feel like we've opened Freemans like three times now, because we've done two major expansions, so that took a lot of time and energy. TS: We had talked about how if we were going to do another project that wasn't another Freemans expansion, it would be different than Freemans. WT: We didn't want to do Freemans, part two.

What were the original reference points? TS: I think the big thing, the first idea, was how extroverted the space is with all the windows on the corner, and how it's the opposite of Freemans, which is very introverted and dark at the end of the alley. This corner just seemed bright and airy and sunny. So, that kind of became the thread for how we were approaching the restaurant. It would be an open, egalitarian, welcoming place.

Were there any specific restaurants you were influenced by? TS: We kind of were thinking about how the Second Avenue Deli had just closed, or thereabouts. And there were other just classic "New York eating machines," that's how I was thinking about it. Whether it's the Oyster Bar in Grand Central, or some of the other diners in Midtown where it's this machine that's very utilitarian, with the big booths and the big lunch counter — it has this sort of classic feel to it.

How was the build? TS: It took a lot longer than we expected. Because it was an existing restaurant, we thought, "Oh, well the hood works, this is going to be a lot easier, there's already air conditioning." But as we got into it, we basically had to start from scratch. WT: It was a lot more painful than we thought it would be. TS: I think it's sort of like buying a used car. You kind of never know what you're going to get. WT: It has everything, it's fully loaded, but then you drive it around and the transmission falls out. TS: I think in the future, if I were to do another existing restaurant or buy a used car, I would want to go into it knowing that I'm going to have to rip everything out. WT: So, it took about a full year, but a full year for a restaurant of this size is pretty quick in a lot of ways.

How did the opening go? TS: I kind of thought it was like the storming of Normandy. The amount of staff and the amount of complexity of Peels is something like we had never done before. WT: Yeah, I mean, we were spoiled from Freemans. Because at Freemans, we got the little restaurant going and made it bigger, and each time we had something to build from. This time, we were just opening a large scale restaurant from scratch. So, the amount of work that was involved was a little daunting at first. When we first opened, we opened at 7:30 AM. Most people open for dinner for a while, they take their time, and then they eventually open for lunch and brunch and later. But we kind of opened pretty quickly, so we were open from 7:30 AM until midnight or 1 AM.

Were there any kinks to work out? TS: I think there's kinks to work out for the first three years. WT: Yeah, everyone thinks that when the review cycle is done, the restaurant is solid and that's what it is. It takes years of tinkering and working to really make it a restaurant that's performing to its true potential. For so many people, it's always about the new place and what's going on, but it just takes a while.

What was the reviews process like? TS: I think the first month we were open, pretty much everyone came through. Did you notice them? WT: Some of them, not everybody. One thing about having a bright and airy space is that it's hard to hide. I mean, the review cycle nowadays is very fast. TS: But I think it's also interesting. Like, where you are in the city, if you're in an outer-borough...we all know restaurants that have gone years before they've actually had the New York Times review them. And for us, it's sort of like....I liken it to reviewing a newborn. What have you done with your life? When you're a month old, you haven't accomplished anything. You're terrible at walking! You're terrible at talking. WT: The review cycle used to be six months, and now it's like 30 to 45 days, if you're lucky.

Did you make any changes after the reviews? WT: The reviews were overall pretty positive. I mean, we were happy with the reviews that we got from the Times, and whatnot. I don't know, I think we've just been trying to tweak things because we have our own aspirations of what we're trying to do. TS: I think with the reviews, for both of us, we just wanted them over and out of the way, and then we could actually focus on the real stuff, like what our actual goals are for the restaurant, and what the restaurant wants to be. I see them as a nuisance, and I see them as sort of out-of-touch, because you get reviewed when you're so new. Like, I think it's more telling what's happening now at Peels, a year later.

And how has the restaurant changed over the last year? TS: I think stuff has stabilized. Staffing's gotten better, service has gotten better. WT: The outdoor seating was one of the big things — it took us a while to get. We opened it in July, and we started working on it in January. It takes a long time, and we're still doing major renovation work and changing things. TS: We're adding a bar downstairs, which has also been taking a long time.

Has the neighborhood embraced the restaurant? WT: Oh, for sure. TS: That was kind of the goal, we wanted it to have a connection to the neighborhood, and for it to be a utilitarian thing for them to use all day long. We even see some people that come for breakfast meetings, and then they come in again for cocktails at night, or they're meeting other people here. WT: It's kind of become a power lunch spot, where we have a lot of the tech companies come over who work in the area, and also a lot of the agents and actors and real estate people.

When you walk into the restaurant after a year, are you still happy with how it looks and feels? TS: Ah, yeah. There's just some weird conditions that we just inherited, like this stair. The stair location creates a weird condition up here that I want to resolve.

Does it feel like it's been a year for you guys? WT: It feels longer than a year for me. TS: A lot has happened in the last year.

Would you ever do another restaurant together? WT: Never say never. Right now, we still have a lot of work to do with what we have on our plates. But you never know — we didn't think we'd do this one, and then it just sort of fell in our laps. TS: I see 2012 as like a maintenance year. Really kind of like trying to dial in, and get everything humming along.