Share All sharing options for: Does James Beard's Ghost Haunt the Beard House?

Around this time of the year, we love to hear industry ghost stories. Here's one the James Beard House. 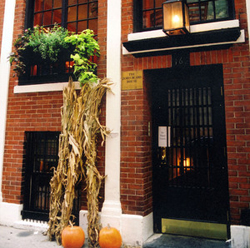 The James Beard House is more well known for their fancy dinners that showcase the talented chefs from around the country than their hauntings, but many believe the ghost of James Beard himself still resides in the brownstone that used to be his home.

The former Director of Operations of the Beard House, Kristopher Moon (who still works with the Foundation but now in a different capacity) said he noticed that sometimes he would leave the brownstone at night, and things would be slightly different in the morning. There's a greenhouse in the back, which is where the cocktail hour is held before dinner, and the space is also used as an art gallery, showcasing different art related to food. The shows change roughly every two months. Mr. Moon said he noticed that occasionally there would be a show where day after day the frames would be crooked when he came in the next morning, but with other shows this would not happen.

He reasoned that, yes, this could be caused by something that isn't a spirit of the dead, but what he really felt was that Jim Beard's spirit was alive and well, and judging art.

A poem written by a guest after a sighting.

There have been instances of Mr. Beard's playful ghost knocking sheetpans off of the walls. Also multiple guests at dinner have claimed to catch glimpses of a large figure out of the corner of their eye, and when they turn, no one is there. The bathroom is an area where there seems to be a lot of activity. If you have not been in the bathroom of the James Beard House: it is entirely mirrored. Guests claim to see the ghost of Jim Beard, then he'll disappear just as suddenly. Some say that this can be blamed on the multiple glasses of wine served at dinner, but given the volume of sightings, who can be sure?