In the Shadow of Times Square, Go 'Elsewhere'

Share All sharing options for: In the Shadow of Times Square, Go 'Elsewhere' 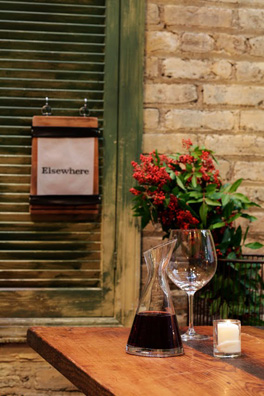 You’re in the 40s on the West Side, past the hordes of tourists trying to find the box office for Wicked or the nearest Blue Hawaii. It’s unclear why you’re here (it always is) and, up until a few months ago, if you asked me where to grab a good glass of wine while stranded here in the shadow of Times Square, my answer would have been, simply, somewhere else.

But as our city continues to evolve and bring wine to even the most bastardized neighborhoods, it was perhaps inevitable (or simply wishful thinking) that a restaurant or bar would eventually emerge on 9th Avenue as more than a mirage for the lost and weary. Now, when asked where to drink when stranded due west of hell, ‘Elsewhere’ is still the answer, but it suggests you stay where you are.

The newish restaurant from the folks at Casellula—a fantastic jewelbox of a wine and cheese bar 10 blocks north on 9th Avenue—boasts a wine list that might be more at home downtown, but stands out here. It comes courtesy of Wine Director Sarah Sutel, a CIA Greystone grad who went on to design wedding cakes before ditching the profession after dealing with one too many Napa Valley bridezillas. She fell in love with wine while working in the school’s cellar and returned to it, eventually landing a job as the retail buyer at Pour on 75th and Amsterdam—a locale that taught her a bit about the struggles of peddling oddball wines to a crowd that doesn’t have a Terroir within eyeshot.

At Elsewhere, instead of succumbing to the just-give-me-a-pinot-grigio mentality, Sutel finds a way to bring her preference for the unfamiliar down to earth. The list leads with a page titled “Intimidating Wine of the Day,” which includes a shot of the label and a lighthearted description of something like Reynald Héaulé’s Rive Droite Rouge NV, a wine that would likely be skipped over by 99.5% of diners. She offers it by both the half bottle and the full bottle.

Beyond, a short but sweet list awaits. It’s split evenly between new and old world, with stylistic diversity in both categories. Currently Sutel has downsized from her spring list which featured a few additional sections, notably one entitled “The Lucky 13,” which highlighted 13 wines made from the gamay grape. The section will return this winter with a new grape as focus, but for now the luck is tucked in throughout. And, on Monday night when all of the wines are offered at half price, your wine list doubles as a winning lottery ticket. On those nights, you’d do best keep your eye on the Champagne section, where 50% off buys you most of the wines at prices well below retail.

On any other day of the week, be adventurous. For those traveling north from below 14th street the list may feel more commonplace, but up here it’s ambitious. The most interesting wines are likely the ones you’ve never heard of, and here they’re offered free of pretension.

Bang For Your Buck
Királyudvar, Pezsg? “Henye”, Tokaji, Hungary, 2007 $59
A blend of furmint and harslevelu sourced from the biodynamic Henye vineyard, this is Kiralyudvar's homage to Huet's famed Petillant (Huet's Noël Pinguet is an adviser). The 2007 is the first release of this wine, produced via the Méthode Champenoise, and only 200 cases were made.

Christian Venier, Cheverny, “Les Hauts de Madon” Loire Valley, France, 2009 $42
Christian Venier is one of a handful of the producers in the Loire Valley working with the menu pineau grape, one of the many old Loire Valley grape varieties clinging to the edge of extinction. Here he blends the grape with sauvignon blanc, the staple white grape of Touraine. Venier, inspired by his friend and mentor Thierry Puzelat, handles the wine minimally, ferments with native yeast, and adds little to no SO2 to the wines. It’s bottled unfined and unfiltered and can tend toward cloudy. Enter with an open mind and the expectation of minerality over fruit.

S. Tissot, Poulsard V.V., Savoie, France, 2010 $49
This is one to seek out before the temps drop too much as it performs best with a slight chill. A pure, unadulterated intro to the Jura’s star red variety. Bright red fruit with that special Jura brand of grit.

St. Innocent, Pinot Noir, “Villages Cuvée”, Willamette Valley, Oregon, 2009 $58
Mark Vlossak consistently puts out some of the Willamette Valley’s most enjoyable pinot noir. His tend toward restraint with lower alcohol and minimal extraction. The Villages Cuvée is his entry level bottling sourced from four different vineyard sites and a mixture of new and older vines. Like most of the 09s this is open and fruit forward and will drink on opening.

René Rostaing, “Puech Noble” Rouge, Languedoc, France, 2007 $64
A blend of syrah with a small amount of mourvèdre from the famed Cote Rotie producer Rene Rostaing. The estate, located near Nimes enjoys cooler temps than some of the Languedoc's surrounding vineyards, making it a site more hospitable to syrah—a grape that often becomes faceless when punched with too much heat. This is a great way to experience Rostaing’s deft work with syrah without shelling for his Cote Roties. Lots of stuffing with great aromatics and enough acidity to keep the wine from skidding on the palate.

Off The Beaten Track
Barboursville, Cabernet Franc Reserve, Charlottesville, Virginia, 2008 $52
It's rare to find an American wine from anywhere outside the big four winemaking states on a wine list in NYC. Here, a little love for one of America's oldest growing regions with this cab franc from one of Virginia's most respected wineries. As of late the state has been getting a few pats from critics and this is priced to make it worth exploring.

Crowd Pleaser
Bebame, Sierra Foothills Red, Amador County, CA, ’10 $49
Bebame is a two-year-old side project from Steve Edmunds of Edmunds St. John, who is known for both his work with syrah and gamay and his pioneering of California's lesser-known growing regions. This is a blend of gamay and cabernet franc that finds its inspiration in the brisk, low alcohol wines of Bourgeuil and the Coteaux du Loir. Fruit-forward, herbal, and floral. Easily one of California's great value wines.

Under $40
Château Béla, Riesling (dry), Béla, Slovakia, 2008 $35
Perhaps the only Slovakian riesling you’ll find in the US. This is made by famed German producer Egon Müller from vineyards lying along the banks of the Danube River, where the Romans once made wine.

Break The Bank
Egly-Ouriet , Brut, “Les Vignes de Vrigny”, 1er Cru, NV $120
Champagne made solely from pinot meunier is very rare. Typically the grape is the third, in terms of percentage, behind either Chardonnay or Pinot Noir in any given three-grape blend. Here, however, grower-producer Egly-Ouriet bottles the oft-dismissed grape on its own and gives a fascinating look at the variety. Great pricing to boot.

WTF
Many of the wines that hover near $100 are a bit too young to go headlong into. With a touch more age on the high end it’s be much more tempting to throw in on something fancy.