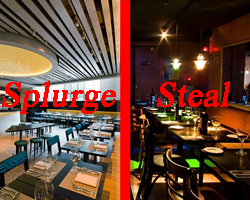 5) La Mar Cebicheria/Chimu La Mar Cebicheria is Peruvian celebrity chef Gaston Acurio's sprawling new restaurant in the old Tabla space. So far, diners and critics seem to love the menu, which features a refined, market-driven take on Peruvian classics. A night out at La Mar can be expensive, especially if you order a lot of starters. So if you want solid Peruvian fare at a much lower price, head to Chimu, which sits right next to the BQE in Williamsburg. This neighborhood restaurant may lack the sparkle of La Mar, but the dining room is comfortable enough, and in the warm weather there's a fine back garden. Here you can also get ceviches, lomo saltado (seared steak with onions, tomatoes, rice, and potatoes), jalea (fried seafood salad), and arroz con mariscos, plus steaks and an addictive rotisserie chicken. Appetizers are under $10, and most entrees are in the mid-teens, so basically everything here is half the price of what's being served at La Mar. Also: Bobby Flay is a big fan. 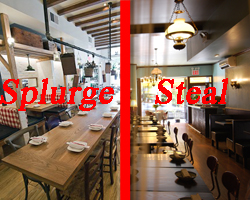 4) Red Farm/Cafe China: The big draw at Red Farm is the dim sum from dumpling king Joe Ng, but pretty much everything here is great. The room has a warm, somewhat rustic vibe — it kind of looks like a farm-to-table restaurant that just happens to serve Chinese food. But if Red Farm is out of your price range (dishes run moderate to expensive), or if you just can't get in (the place has been mobbed since day one), consider the stylish new Cafe China in Midtown. Although you won't find anything like Red Farm's filet mignon tarts or spicy crispy beef here, the dim sum is great and there are a number of interesting Sichuan specialties that are worth trying, like the spicy diced rabbit and peppered frogs legs. Most of the family-style entrees are around $15. At lunch, entrees are $8-$13. 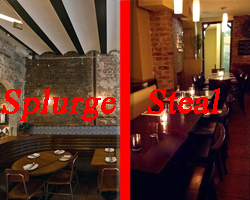 3) Tertulia/Caliu: Tertulia is hands down one of the hottest restaurants in New York right now. Seamus Mullen's food is full of big flavors and the room has a cool, slightly weathered look to it. If you can't get in, head to Caliu just a few blocks away. This year-old restaurant was opened by chef Franco Barrio, who, like Mullen, worked at Boqueria before striking out on his own. Here you can get many of the classic tapas dishes found at Tertulia, followed by a steak, simply prepared fresh fish dish, or paella. Small plates are all under $12, and entrees are under $17. Caliu doesn't attract quite as many celebrities as Tertulia, but Lady Gaga did spend New Year's Eve there last year. 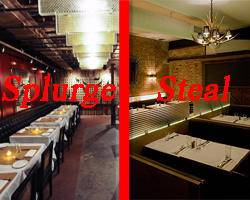 2) Saxon + Parole/Jo's The new project in the old Double Crown space features a striking dining room from AvroKo, and a menu of all-American chops and seafood dishes from chef Brad Farmerie. It's one of the great new date night restaurants in New York. Most of the meat and fish entrees are in the $24-$40 range, but if that's too rich for your blood, go to Jo's just a few blocks south in Nolita. This neighborhood gem has a comfortable bar in the front, and a cozy dining room in the back. At Jo's you can also get a roast chicken, pork chop, or steak, but here most entrees are under $20, and there's also a fantastic burger for only $12. Jo's doesn't have its own brand of bourbon, but they do make a hell of a Manhattan. 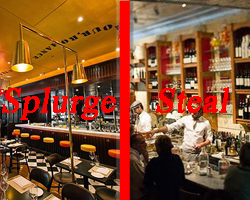 1) La Promenade des Anglais/Buvette: La Promenade De Anglais is the new Chelsea brasserie from acclaimed chef Alain Allegretti. So far, people love his take on casual French Riviera cuisine. But if you're looking for something a bit more intimate and considerably cheaper, check out Buvette, the new restaurant from Jody Williams in the old Pink Tea Cup space. Her food also draws influence from France and Italy, and there's a ton of variety on the menu. Best of all? Most dishes are priced under ten bucks (only the sliced cured hams are more — they're $14). Just like at La Promenade, you can order charcuterie, whipped salt cod, and sausage and poultry dishes. The plates are not entree size, but considering the low price, you can have a lot to eat here for under $30 per person.