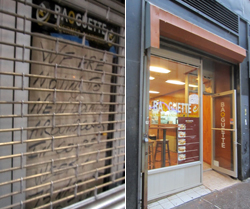 1) Financial District: The Baoguette over on Maiden Lane in the old Klatch space is closed. But there's good news for fans: they've already opened up on Nassau Street (right). [ShutterWire]

3) East Village: Two weeks ago, the Dept. of Health shuttered Thai restaurant Holy Basil after it racked up 110 violations. Now EV Grieve reports the restaurant is closed for good. [EVG]

4) Upper West Side: A couple of Upper West Side shutters: West Side Rag sends word that eight year-old Eretz Kosher Market and Cafe has served its last, as have 30 year-old Korean deli Golden Mart and 40 year-old deli Great Farm. [WSR]

5) Upper East Side: From the tipline: "You can add Mustang Grill (85th and 2nd) to the shutter list. Windows papered over and notice on door that it was seized by the marshal." [ShutterWire]