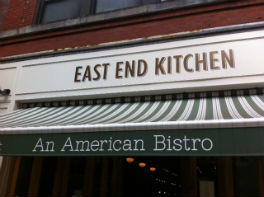 We did our friends a favor and schlepped to the Upper East Side to have brunch with some friends this past weekend. They had recently walked by the East End Kitchen and thought that it could be a good place to go, and not really knowing anything about the neighborhood besides JG Mellons, went along for the ride. The place seemed nice enough when we got there, but quickly went awry. The first sign things were amiss were when the waitress took our drink order and proceeded to stand by the bar while the bartender made each bloody mary individually.

She came back ten minutes later with the wrong drinks even though the four of us had ordered the exact same thing. Rather than wait another 10 minutes to get the drinks remade, we had her leave them so we could get our order in. She also said the kitchen couldn't turn an omelette into a scramble, but we could order the omelette and a side of scrambled eggs if we wanted. Because who doesn't want a double order of eggs?

Orders in, we enjoyed the drink and waited for our food. And waited. And waited. After about 30 minutes we asked the waitress where our food was, and she said that it would be ready in about five minutes. When the food didn't arrive, we asked another waitress to head back to the kitchen and check on it for us. She refused, saying "they will yell at me if I ask about your food, so I am not going back there." She then went to the bar and sat down to count her tips (see picture). Almost simultaneously, a manager slammed something down and quit, storming out of the restaurant. Some of the other floor staff celebrated at this turn of events.

Finally our waitress reappeared and we asked her if our food was ever coming. She said it was, and then offered us some toast while we waited. None of us said yes, but she quickly appeared with a pile of toast and a dish of butter. Before any of us could dig in, I noticed one of the waitress's thick black hairs draped across the butter. So much for that.

10 minutes later, three of the orders arrived. Hungry to eat ANYTHING at this point, we each took a bite before quickly realizing that everything was amiss. My cheese omelette lacked cheese, there was missing ingredients from the rest of the food, and everything was ice cold. It took 75 minutes, no food, bad service and a manager quitting before we decided to just leave. A manager and owner came over to apologize and say that they had run out of food and were doing the best they could, but it really seemed like the real staff never showed up and they hired actors to pretend to run a restaurant for a day. We quickly got up and left and headed to the nearest bagel shop. The moral of the story? The Upper East Side sucks.