A Design Tour of Cafe Colette From Owner Zeb Stewart

Share All sharing options for: A Design Tour of Cafe Colette From Owner Zeb Stewart 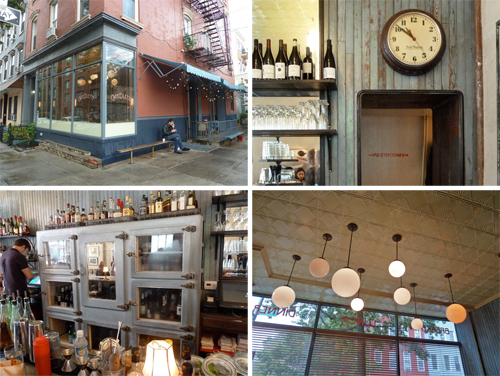 Cafe Colette is the one-year-old Williamsburg restaurant from Zeb Stewart, the restaurateur behind Union Pool and Hotel Delmano. Unlike his previous two projects, Cafe Colette doesn't have a distinctly old-timey look. There also doesn't seem to be one overriding design influence — it could be a cafe in a French seaside town, or a bar in Havana, and parts of the space resemble the hull of a ship. Below, Zeb explains how it all came together. 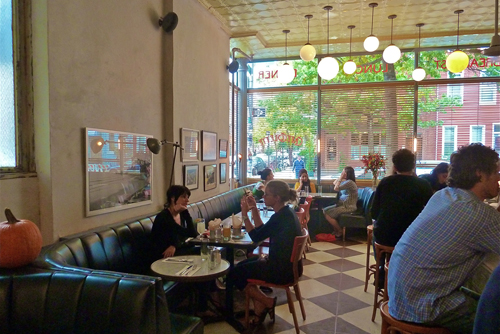 Zeb Stewart, owner: "I felt like everyone was doing this sort of old-timey thing, and I was looking for something a little bit refreshing and a little bit different. I found myself sitting in places that were sort of haphazardly put together, and really enjoying them. So with this place, I just tried to piece it together with what was available. 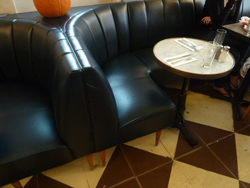 "I was in Argentina and Mexico, and I loved the way that people down there painted their floors so it looked like they had tile floors, even though they maybe couldn't afford it. So, this is an old tile floor that we actually ground down. It was glazed over the top, and we took off the glazing and exposed the terra cotta and then painted on this checkered pattern. 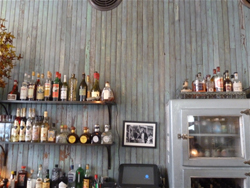 "I built this place with a lot of stuff that was stored in my house. I have a 6,000 square foot space out in Bushwick, and I collect architectural stuff. This wood was actually grey out of my house, but I was sanding a piece of it down one day, and I found a layer of blue paint like three layers down. So, we basically sanded each one of these boards, and tried to stop at the blue layer. 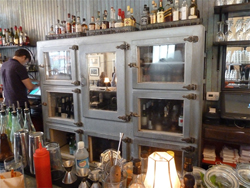 "I found this fridge upstate. This is an old wooden fridge, and we actually wrapped the whole thing with zinc. I think I have a fetish for old refrigerators, I think I stood in one of these as a kid. You can kind of turn any room into a refrigerator. The compressor is down in the basement, and the condensing unit, which blows the cold air, is inside the refrigerator.

"This is all marble tile. I wanted to do subway tile everywhere, and I was fighting my inner urge, thinking, "Keith McNally's ruined it! No more subway tiles. How about cut marble?" And then, these are old fire doors. You can order these old circular lights, and then I used old chicken wire and glass to fill it in. 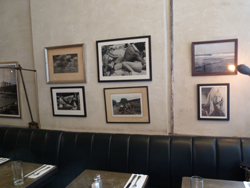 "I don't really like places that open with all photography on the walls. So with Colette, I want these walls to be filled with photography eventually, but I'm just kind of collecting things over time. Even though the room feels kind of awkward sometimes and kind of barren, I feel like we're getting there over time, and it allows for a more honest development of the space. 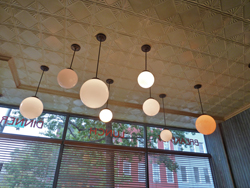 "We made these lights. I had seen somebody that had done this before — I think it was a picture of a place in Paris — where they had a group of three lights. We just pulled together parts from Grand Brass & Lamp. You order online and you just put all the components together. The ones that are a little bit yellow, we washed them with an amber shellac. I think I should do more of those, actually. 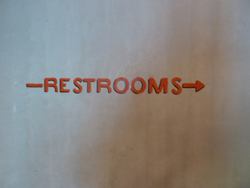 "My friend Ray does all my lettering for me, and he's a really accomplished artist. He just does it as a favor, because we've known him forever. It's based on some really clean lettering from a really old poster from a movie that was called Cafe Colette. 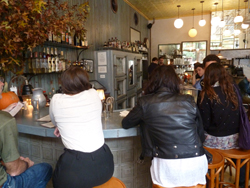 "This is a zinc bar. My partner at Delmano, Michael Smart, wrapped this for me. He's done a lot of zinc work in the city, you'll see his bars all over the place. I used to have some really beautiful bar stools here that were like barber stools that were bolted to the floor, but I kept finding myself not enjoying sitting on them. There are so many traditions that we do in New York City bars that are impeded by having stationary stools. Like, maybe you want to turn, or if someone sits down next to you, even though we don't move at all, we'll move an eighth of an inch to make the impression that we're welcoming that person. You can't do that with a stationary bar stool. 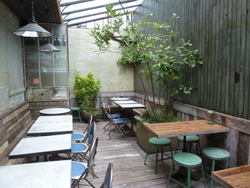 "This is a new space that we opened up this summer. It's going to be winterized and there will be a little wood stove over in the corner. These chairs are really cool, they're from an old theater. A friend sent me a picture of them, and I called the woman at the theater and she had a bunch of them. They're amazing, they fold up, and they never break. The wood is all old oak fence boards that were piled up in my house."