At Midtown's La Silhouette, chef Matthew Tropeano serves straightforward French-American food, executed with just a few modern twists. Most of his dishes aren't terribly complicated in terms of plating, but Tropeano likes to draw sketches in the early stages. Here are drawings of two new dishes for the fall: fried sweetbreads with butternut agnolotti, and scallops with lentils and seafood broth. 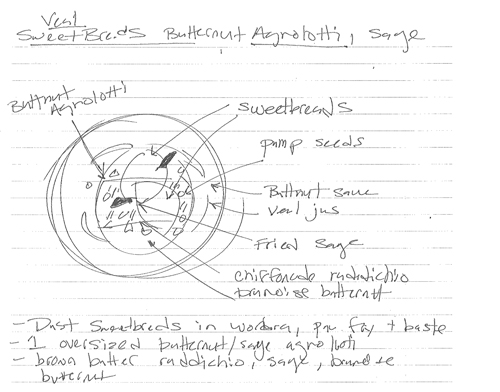 [Click here to enlarge]
Matthew Tropeano, Chef: "I've never done sweetbreads with ravioli before. It started with three smaller agnolotti, and then I thought it would be nicer to get one big one, especially for an appetizer. Basically, the pasta is a vessel to get butternut squash on there — I like butternut squash with sweetbreads. And then, you know, the flavors of sage, pumpkin seeds — everything just kind of goes together. And yeah, the agnolotti is a great excuse to do a little homemade pasta. I guess when I'm plating it, I'm thinking about the customer cutting into the sweetbread and hopefully cutting into the agnolotti at the same time. And the butternut sauce has a nice to look at, visually. This is definitely a fall dish. 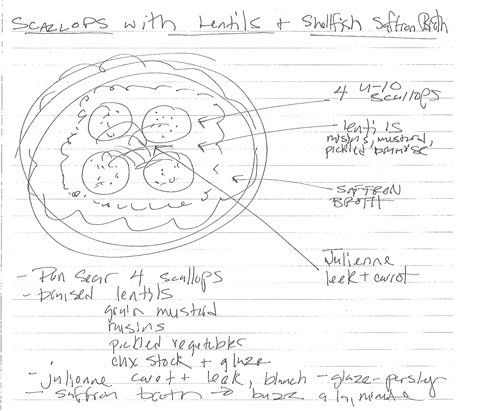 [Click here to enlarge]
"The scallops are a 'this half of the year' dish — for fall or winter. I knew that I wanted lentils on the menu, and I knew that I wanted scallops on the menu, so it wasn't very hard to do at all. The lentils have some pickled vegetables in them, some sweet raisins, and some whole grain mustard, so it doesn't get boring quickly. You get some of the sauce on the lentils, some of the scallop, and I think you have some really great flavors going on. That's a saffron shellfish broth, and we buzz it up. So, we get prawns, and we'll use the prawn shells and make a really quick sauce, and aerate it with a blender. I like the idea of putting the four scallops together, and kind of holding up the julienne of vegetables. I've always been a naturalist when it comes to plating. I think just let the ingredients speak for themselves, and don't do too much. I really do appreciate the other side of it, where people are putting things here and there, but it's just not me. Like I said, I like to be able to get certain bites out of dishes, and have everything come together."