10 Restaurants That The Next NYT Critic Should Reassess

Share All sharing options for: 10 Restaurants That The Next NYT Critic Should Reassess

Now that Sam Sifton's gone, it's time to think about the restaurants that should be reviewed by the next New York Times critic, whoever that may be. 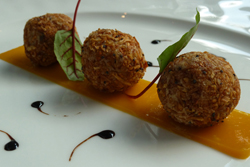 10) The Modern: Five years ago, Frank Bruni thought that The Modern's formal dining room was worthy of two stars. He loved the space, but found some misfires on the menu. It's definitely time for a re-review — Gabriel Kreuther has proved to be a creative and dedicated chef, and the service is great these days. Three stars would be a good bet, but who knows? Maybe Danny Meyer and his team will channel some of their energy into making The Modern a proper four star restaurant, now that Eleven Madison Park has left the family. Side note: Oddly enough, the adjacent Bar Room currently holds three stars. 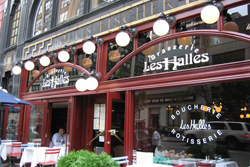 9) Les Halles Park Ave: This French steakhouse received two stars from the New York Times 20 years ago. It's not a very good restaurant anymore, but Les Halles still attracts throngs of tourists and business lunchers because of its big name "Chef at Large," Anthony Bourdain. It would be interesting to see how this place fares on a re-review, to say the least. 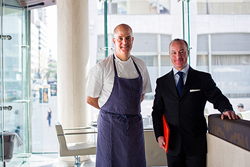 8) Lincoln: Hopefully, the new critic will take the time to revisit the biggest opening of 2010, Jonathan Benno's Lincoln. A few critics have noted that the restaurant is a much smoother operation these days, and that Benno's food is better than ever. Right now, Lincoln could up its star count, or maybe the changes haven't been significant enough for an upgrade — it would be a fascinating review, either way. 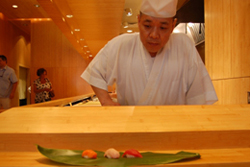 7) Sushi Yasuda: Yasuda has held onto three stars ever since William Grimes passed through back in 2000 (Bruni dropped a dining brief back in 2008). But a lot has changed in the last year: proprietor and star sushi maker Naomichi Yasuda left the restaurant, and his former second in command, Mitsuru Tamura, is now in charge. Is it still a three-star sushi destination, now that Tamura is at the helm? 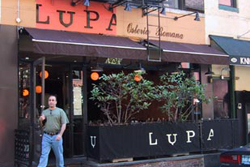 6) Lupa: The only time a NYT critic reviewed Mario Batali, Joe Bastianich, and Mark Ladner's Roman trattoria was way back in 1999, when Eric Asimov wrote an enthusiastic $25 and under piece. So, Lupa doesn't need a second review, it needs a first one, actually. By all accounts, the food is still great here, and Lupa's reputation remains very strong, especially within the industry. 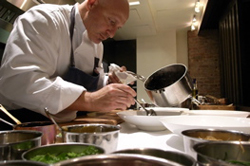 5) Colicchio & Sons: Sifton's three star review was the best thing that ever happened to this place. Many people complain that this restaurant is way too expensive, and some people (particularly the Chowhounders) think that it just plain sucks. At the very least, it would be interesting to see how Colicchio & Sons fares when Don Tom isn't expecting a big critic to pass through. 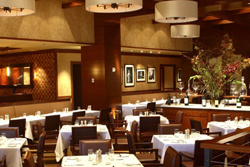 4) Porter House: It's not the most stylish restaurant, nor the most innovative, but a lot of New Yorkers absolutely love Porter House. It's a fine place for steaks and chops, but there's also a lot of variety on the menu, and Michael Lomonaco knows how to deliver satisfying New American cuisine. In his one-star assessment from 2006, Frank Bruni wasn't wowed by some of the starters and non-steak entrees. But, perhaps Porter House has found its groove over the last five years. It could very well warrant two based on the food and the service, but three stars might not be out of the picture. 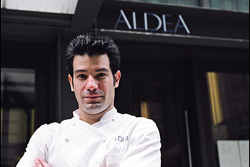 3) Aldea: The questions here is: has Aldea grown into a three-star establishment since 2009? Frank Bruni loved many of the dishes at George Mendes's Flatiron restaurant, but thought that the menu lacked a through-line. Over the last two years, Mendes has continued to refine his culinary vision, and lately he's garnered a lot of accolades for his work. It's certainly no less than a high two these days. 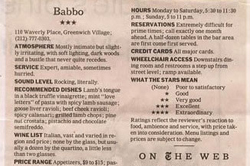 2) Babbo: Bruni reviewed Babbo back in 2006, exactly six years after it opened. And really, this is the kind of restaurant that should be reviewed every six or seven years, just like the four star big boys. It will probably never earn the highest rating from the New York Times — not with the soundtrack, and the tight layout of the dining room. But, it would be good to know if it's still worthy of three stars, especially because it remains one of the hardest reservations to get in New York. 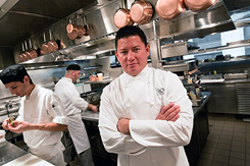 1) SHO Shaun Hergatt: A lot of people were annoyed with Sifton's two star assessment of SHO. Fans of the restaurant will say that the food is up there with what's being served at the four star establishments of the city, and that the overall dining room experience makes up for the fact that it's located on the second floor of a condo in the FiDi. With two Michelin stars, and some renewed interest from the other critics, SHO is the perfect candidate for a re-review, hopefully sometime soon.