Share All sharing options for: B & B's Josh Capon and John McDonald 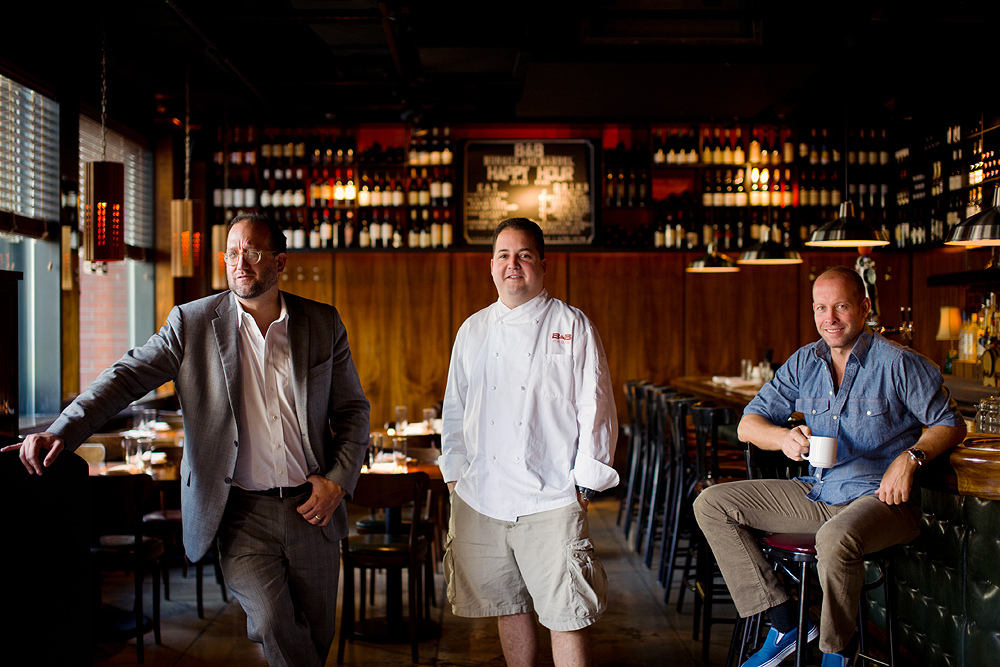 Last October, chef Josh Capon and restaurateurs John McDonald and Josh Pickard opened B & B just down the street from their other restaurant, Lure Fishbar. Burgers were always a part of the plan (Capon is a two time Burger Bash champ), but the guys also wanted to create a restaurant that offered a lot of variety — a place to get a casual bite, or a serious meal. We recently chatted with Capon and McDonald about how the wine pub has grown over the last year, and what they've got planned for the future.

When did you first start talking about a project like this? John McDonald, owner: To be honest with you, it's something I'd had in my mind for a couple of years. But at the same time, I didn't want to do something that wasn't in the immediate neighborhood. I always knew the menu was more of this rounded pub-type concept. Josh Capon, chef: It's a nice alternative to Lure, which is a very different animal all together.

How did you find the space? JM: I knew the guys that were here before — Murray Moss and Nicola. The landlord at the time was a customer of mine at Lure — he lived in the neighborhood — and it really did kind of organically happen that way. He came in one day, and I asked about what was going to happen with that space. I said, "Here's my idea, I'd love to be able to do it kind of in our backyard." I think there's a lot to be said for playing to your strengths and keeping it very tight. In my case it's pretty extreme, having three places on one block. But there's a peace of mind in knowing that Josh can bounce between here and Lure. It's that ability to kind of quickly supervise without being anchored, I think that has a nice impact. And there's synergy between our customers. It's like having an extended dining room of Lure.

How did the opening go? JM: You know, today everything is immediate. There's really no subtlety, there's pressure to deliver more quickly. In some ways, it's more about how much restraint you have to use as an owner, to know how much rope to let out, to be patient, and kind of control it. Whereas before, ten years ago, that wasn't quite the case. I think anyone who opens a place today has a certain high level of bodies coming in and eyeballs checking out what you're doing. You've got to hopefully nail it faster than you normally would.

A lot of the big critics didn't review the restaurant. How did you feel about that? JM: I wasn't sure if they would or if they wouldn't, to be honest with you. Because of what it is, and the way they might have perceived it — the size, the scale — it didn't surprise me, and ultimately, it didn't impact our business. Maybe it will happen, maybe it won't. I don't know the answer. I don't worry about it. JC: We did for a little while, but you know what? We just got to do what we do, day in and day out.

Did the neighbors check it out? JC: Oh yeah, we got a lot of locals. To me, Soho has a very old world feel. Everybody knows each other in Soho. You walk around and you see a lot of familiar faces, which I think is very special. It's one of the reason I've enjoyed working down here — there's a very old world charm that you don't find a lot in Midtown or uptown. Everybody knows your name down here. I'm a big Cheers fan, so. JM: It's a 65 seat restaurant. So for me, I've been on this block for 20 years and it's easy to fill these seats, but it's more about refining what you want to do with them. Like, what's the product? What's the vibe? Quite honestly, this is almost a selfish endeavor in the sense that I know that this is the kind of place that I would personally want on the block. At the end of the day, it's more about like a "usability" issue. We build a restaurant, but how do you use it?

Has it been difficult to split yourself between two kitchens? JC: Yes and no. People always say, "Hey, where are you going to be tonight?" Well, we've created a customer base that doesn't just come for great food, they come for a good time. They come to see me, they come to see Johnny, they come to see Robert, my general manager. And I always say, "I'm back and forth every day." If you're there, at Lure? Text me, I'll come running over. So, I'm really lucky that these restaurant are just a block away, because I don't know how some of the big boys do it when they have restaurants all over the country. It's very difficult to be in all places. Even if you have five restaurants in New York city, you can't be in all places. I think people want to see your face and not just eat your food. So, has it been difficult? Not so much, because we're so close. I've been lucky, but I don't know how I'd do it otherwise.

You just introduced a market menu. What can we expect from that? JC: Yeah, the market menu is kind of fun. We start with five to seven specials, and we're just doing cool stuff. People might come here for the burger the first time, but once they start to explore the menu, they realize that there's a lot more to offer. JM: These guys have been working to perfect the prime rib. They're cooking it for six hours. JC: You can come here for a quick burger at lunch, or you can come here for a prime rib dinner. The place has a lot of personality, which I think is kind of nice.

What are the details on the prime rib? So, right now I'm getting a beautiful Creekstone Farms ribeye, we're cooking it for six or seven hours, then we're finishing it on the plancha. So, the dinner for four is a couple of appetizers, everybody gets a salad, and then you get a beautiful sliced prime rib, a beautiful bordelaise sauce, four different side dishes, and a couple of desserts. You can fill that in with a couple of beers or glasses of wine, or we had a table the other day that bought a thousand dollar bottle of wine. So again, there's room for interpretation at B & B, you can take it wherever you want to go. Either way, it's a great dinner. And I'm not saying it's for every day, but it's a special thing to go out and have a prime rib dinner.

Does it feel like it's been a year? JC: It went kind of quick. JM: To be honest with you, it feels younger than that. JC: We have fun down here. John and I have a great relationship, Robert, Josh — everybody. I can't believe it's been a year, so I guess the answer is no. Its been a quick year, I'll say that.