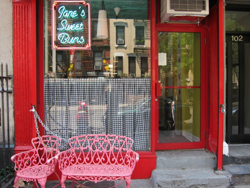 Unlike last month's Community Board 3 SLA Licensing Committee meeting in which several angry citizens came to give their two cents on why Heather's and Diablo Royale should shutter (the former almost doing so), there was only one citizen cry at last night's meeting and it was against Cienfuegos mixologist Jane Danger who asked for a wine and beer license to pair with her boozy desserts at Jane's Sweet Buns. Board member and bar owner David McWater's thoughts? “If there is a market to have a cupcake and port at 1 AM, then God bless America.” Danger left the meeting with her desired license, only after a fraught debate amongst board members in which a fiery McWater directed the words “dictator” and “fascist” at the board chair.

The liquor won't be flowing as freely at 95 Delancey St., aka Ludlow Bar, at least not for a while. As previously reported, the space has been taken over by the management team behind The Delancey, and while they acquired a liquor license for a Spanish tapas-style restaurant on the ground floor at an earlier meeting, they came back last night requesting once again to pour libations on the second floor and rooftop, which would bring maximum capacity of the three-story project to 450 people. The board was reticent, claiming they failed to present a thought-out plan as to how they were going to manage security and facilitate safety on what the board claims is one of the deadliest streets (in terms of pedestrian and vehicle fatalities) in all five boroughs. The team was allowed to withdraw their request a second time until they can return with a more detailed presentation that doesn't merely involve bringing their beefy head of security from The Delancey as proof of a sound safety plan.

Full liquor licenses were awarded to La Fonda, which will be a Mexican eatery on Avenue B, and Salita, a soon to be Latin restaurant at 60 Clinton St.

The Board awarded a young former consultant with a wine and beer license for his new venture on Avenue C. Listed as Bobwhite Lunch and Supper Counter, the theme is, shockingly, Southern comfort food.

Looks like what will be a “French, Vietnamese, Creole” bistro-style restaurant marked as Ducks Eatery on the board's proposal packets will open at 351 E 12th St. with a full liquor license.

And lastly, the board members were packing their bags as they awarded Erika Chou of Yunnan Kitchen a wine and beer license to go with her tea-smoked duck.
—Jetty-Jane Connor
[Photo Credit]