Some restaurant lines are worse than others. Here's a list of 10 really nasty ones: 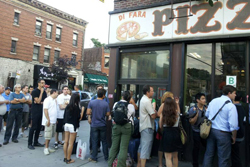 10) Di Fara: Still one of the best pizzas in the country, and one of the most baffling lines in the universe. It's not really a line, so much as a big cluster of confused, hungry, slightly combative foodies. And once you place an order, you're on what is called "Di Fara time." Your pizza might come out in nine minutes, or 90 minutes. [Photo] 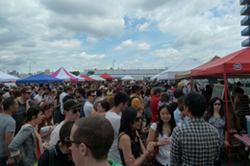 9) Smorgasburg: There are great things going on in North Brooklyn right now — an artisanal food utopia, some might say. One with insanely long lines. At peak hours, the lines for the pupusas, kimchi dogs, and olive-oil scented mayonnaise start to blend into one big, sweaty mass of cut-off jeans, strollers, tank tops, and teeny, tiny mustaches. [Photo] 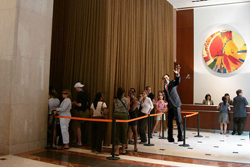 8) Burger Joint: Burger Joint is the "hidden" fast food restaurant that's not hidden or fast because there's always a long line snaking out in front. Those cheeseburgers are good, but are they "wait in a hotel lobby for 45 minutes with a bunch of Japanese tourists" good? That's up for debate. On the plus side, the bathroom downstairs has one of those classy Dyson hand dryers. [Photo] 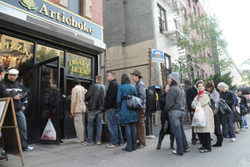 7) Artichoke: There's actually something sort of magical about this line if you think about it. It was there the first week the pizzeria opened three years ago, and it's still just as long now, even though there are two other locations nearby and the pizzas are now available in the frozen foods section of your local grocery store. 20 years from now, there will probably be an Artichoke in every city in America, but the people will still line up on 14th Street for that thick slice of spinach dip-topped pizza. [Photo] 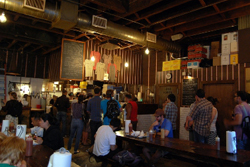 6) Fette Sau: At any given moment, 40 - 50 % of North Brooklyn's hipster population is waiting in line at Fette Sau. It's just wrong. [Photo] 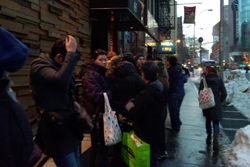 5) Ippudo: In rain, sleet, snow, and blistering heat, people line up for this ramen place before it opens so they can be the first to snag a table — Ippudo customers are a dedicated bunch. It will be interesting to see what the lines will be like at the Ippudo in Midtown, a neighborhood where diners are really, really good at waiting in impossibly long lines. [Photo] 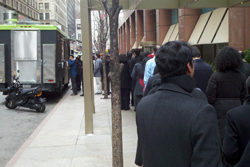 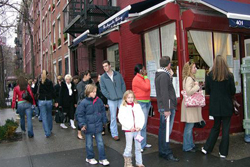 3) Magnolia: Ladies, don't bring your boyfriends here — ten minutes in this line will take one year off your man's life, so do the math there. [Photo] 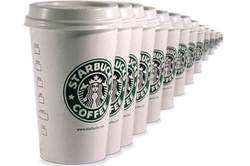 2) Any Bathroom Line at Starbucks, But Especially the One at the Corner of West Broadway and Houston Street: Some prisons have nicer bathrooms than the ones at Starbucks. The lines are always bad no matter which one you go to, but a strong contender for the hands-down worst bathroom line is the one at the location on West Broadway and Houston Street. It actually has amusement park-style Tensabarriers to keep all the European tourists and laptop hobos in one nice, tidy row. [Photo] 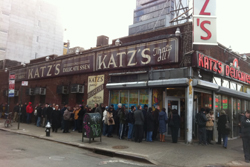 1) Katz's: Some people love Katz's, others don't, but nobody likes waiting in this line. It's long, confusing, full of out-of-towners, and the air around it is thick with pastrami steam — and that's just the line to get in. Once it's time to leave, you must face another gargantuan queue to pay the person at the cash register. Hopefully this one won't take too long, and you'll have that little red ticket that they gave you on the way in. If not, you're in for a world of pain. [Photo]

Just Missed The List: Shake Shack's line is long, but they work hard to cut it down whenever possible, and the Shackburgers make up for it. The line at Grimaldi's is pretty lame, but at least you're under the Brooklyn Bridge, which is cool. The line for the halal cart at 53rd and 6th Ave is a monster, but also a classic. And it sucks waiting in line at Maison Laduree, but those macarons have magical powers.