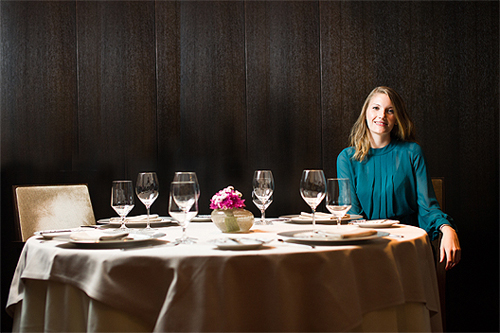 Kristen Millar has worked in a lot of great New York restaurants. Originally from Cheshire, England, she started in the kitchen at Cafe Gray about five years ago, then worked the front of the house at Eleven Madison Park when it received four stars from the New York Times. She opened Danny Meyer's Maialino, then moved to the Altamarea group, where she became the Maitre D' at Michael White's French Riviera-inspired restaurant Ai Fiori in the Setai Hotel.

It's 8 PM on a Saturday night. What's the wait for a table? Kristen Millar, Maitre D': If you come in at 8 o'clock, I can probably get you seated by 9 o'clock in the dining room. Saturdays are huge for us as far as volume, but you know we have this gorgeous bar and we offer the full menu out there.

It's really great to be able to offer the guests the ability to have a full dinner at the bar, or if they want, they can hang out and have a few snacks while they wait for their table. I mean, as far as I'm concerned, the best tool that I have is that this restaurant gives me options to give to the guests, and that's such a really important thing to have. It's a beautiful, very comfortable bar. You can have a full-on dinner if you want, but it's also becoming a really hip after work drinks kind-of-place. You can come here and have a tasting, or you can come here and have a quick bowl of pasta at the bar.

Is there anything I can do to make my wait shorter? You know, just being polite goes a really, really long way. I'm going to try and treat people fairly and diplomatically, but kindness goes a long way.

Tell us about your favorite customers. We've done an amazing job at creating regulars. I'm actually having lunch with one of our biggest regulars next Tuesday. She's taking me out for a belated birthday lunch — she's amazing. These are the people that we really want to take care of. They come to the restaurant on a weekly or bi-weekly basis, they introduce their friends to the restaurant, so I love being able to create that kind of rapport with them. So, I'm going out to lunch with them next week. And we have a couple of gentleman who live in the neighborhood too that come and have dinner at the bar every Friday night. They did something for me that blew my expectations away — it's never happened to me as long as I've worked in restaurants. They have their own interior design business, and it was the weekend of the Kentucky Derby, and I was going to a Kentucky Derby event, and I didn't have a hat. They could not believe that I didn't have a hat, so from Friday night into Saturday, they made me three hats, and they dropped them off at the restaurant. I came into work the next day and I had a huge carrier bag with three hats to choose from to go to the Kentucky Derby. You know what I mean? It's creating new connections with people that will continue to keep this restaurant alive, they're the people that we have to take care of.

How about celebrities? Martha Stewart was here last night. We're doing a lot of private dining business, and she was here for a private event that we were doing. Beyonce comes relatively frequently for lunch, she sometimes uses the private dining space if she wants a little bit more privacy. Ryan Seacrest was staying in The Setai for a while, he would come down often for dinner. Ron Weasley from Harry Potter came in when they were doing the last Harry Potter premiere.

How do you deal with a VIP when there are no tables left to give? I'll always make something work for them. Like I said before, this restaurant offers an abundance of options. If I don't have a table that's immediately ready in the dining room, we will pour them some Champagne at the bar and make them comfortable, and find a seat for them in the lounge until something becomes available in the dining room. Maybe if we aren't using the private dining room that night, we can accommodate a table for them in there. There's always a way to make it happen.

What's the most outrageous request from a customer that you've accommodated? We actually did something really wonderful. It was the weekend of the Gay Pride Parade, and we had two gentleman come to us who wanted to get married, and we hosted an entire gay wedding in our private dining space, which was pretty wonderful. It was a great thing to be a part of. We've actually hosted several weddings. But I'm just thinking about strangest request? we had someone who came in recently who asked for a lactose pill, and we actually had one lurking around, because one of our sommeliers is lactose intolerant. When someone comes in and asks for something that obscure, it feels pretty good to say yes. You never know what you're going to get thrown at you. Any requests that you couldn't accommodate? We always do our best. We try to avoid saying no. I think there's always ways of making people happy or trying to accommodate requests.

Tell us a little about the review process. It seems like you had all of your big reviews in the same month. That's exactly right. It actually started a little bit later for us. It happens so quickly now. I think we'd been open for two months when Steve Cuozzo came in, the New York Post review came out first, followed by New York and Sam Sifton, but we were very happy.

Did you think that the critics, and specifically Sam Sifton, judged the dining room a little too harshly? The one thing I will say is that the response that we get from guests when they come in to the restaurant is that they are surprised, because they have their expectations set by Sam Sifton, and they're like, "I can't believe he didn't like this space. It's so beautiful." You know, I think he painted it out to be this kind of bare bones corporate hotel-style space, which is cold and doesn't really have any character to offer. But, you know I think both him and Adam Platt aren't really fans of hotel restaurants. So, I'm not sure if we were surprised, but we were really happy with the reviews. It had been so long since he'd given out three stars. I think Colicchio & Sons was the last restaurant he'd given three stars to, so it had almost been a year. Ryan Sutton gave us a really great review, too. He's really great, very thoughtful. He spent a little time at the bar as well, and took his time taking it all in.

Where are you eating when you're not here? Well, I live in Williamsburg. So, I actually don't leave Brooklyn that much on my days off. My favorite restaurant in Brooklyn is Marlow & Sons, and I live a five minute walk away from there. So, I'm either shopping at Marlow & Daughters to cook at home, or if I'm out and about in the city — without sounding horribly biased — Marea and Osteria Morini are still amazing restaurants. I still stop by Gramercy Tavern sometimes after work. But I'd say that Marlow & Sons is probably my favorite -- it's the way I want to eat. It's very simple, honest food.

What's the best time to come to Ai Fiori, and what's that best thing to order? My favorite time in this restaurant is honestly Monday-Thursday. The bar is alive, there are people in here drinking, eating, catching up on old times — it feels really alive. As far as best dish on the menu, I'm telling you and this is not a lie, the spaghetti would probably be one of my last dishes on earth. It's blue crab and Calabrian chili, which is kind of pickled, so they have a little bit of heat, but a little bit of vinegar and acid also, and then shaved bottarga. It's simple, but it's one of those dishes where you read it on the menu, you taste it, and it blows you away. It just hits all of those right spots.