The Owners of La Petite Auberge on its Final Night

Share All sharing options for: The Owners of La Petite Auberge on its Final Night

The is the debut of a new column in which Lost City's Brooks of Sheffield revisits died-in-the-wool old-school Gotham restaurants he has previously profiled in his column "Who Goes There?," and interviews the owners as they prepare to close the doors forever. We desperately hope that "Final Seating" will appear only occasionally. 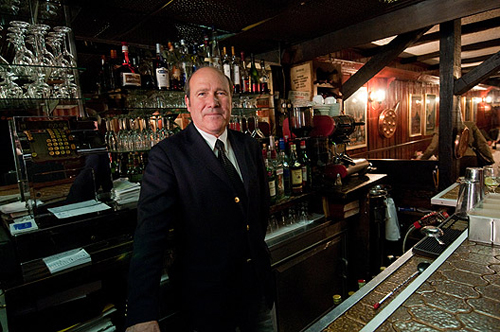 La Petite Auberge was one of the last of the City's old-guard, French restaurants, a woody little refuge on Lexington and 28th where you could count on Le Filet de Sole Meunière and Les Cuisses de Grenouilles being on the menu—just as they were in April 1977, when owners Marcel Guélaff and Raymond Auffret, two sons of Brittany, first opened shop. In September, the two men decided it was time to retire. From the time they announced their decision in the New York Times, they were booked solidly every lunch and dinner; some regulars, desperate to get in their fill while they could, ate there every day until the final meal was served on Saturday night, Oct. 8. I spoke to the two genteel restaurateurs, distinguished men in suits and ties, the night before it all ended.

What was this neighborhood like when you first opened? Raymond Auffret: There were no Indian restaurants. It was mainly Armenian. There were Spanish, Italian, also French.

Was there a reason you chose this location? Marcel Guélaff: Yes. First of all, I was working at a restaurant here called Au Petit Paris. I worked there for 13 years. He worked there for seven years. And we know so many people. We thought those people would come here. RA: Also, it was personal. This is the restaurant where I learned my profession. It was a French restaurant back then. That was back in the 1960s. It was called Au Petit Paris. My mother worked here. My sister worked here. So we had a lot of connections here. As the years went on, when we bought it, it was a Brazilian restaurant. We felt a lot of?what do you say?good vibes. Marcel looked at a lot of other restaurants, but something was pulling us here.

Did the interior look different when you took over? MG: A little different. We changed the ceiling, we changed the floor. But the walls were left the same. RA: We called it La Petite Auberge, which means country inn. We wanted it to feel like a country inn. MG: You go to different little towns in France and you'll find an auberge, so many places called La Petite Auberge. RA: It's always a very nice restaurant, and when they call it "Auberge," it's usually an inn, so they always had one or two rooms if you'd like to stay overnight. We get calls all the time from travelers. They ask, "What are the rates?"

Has the menu changed much over the years? MG: The menu has been the same since we opened. We changed a few dishes. Not too many. RA: The main thing with us, we maintain classic, traditional French food. French food went through many things—nouvelle, fusion. We thought we shouldn't go along with the trend, and just keep doing what we do, and do it well. It's basically the same menu for 35 years. That's what brought the people coming back. They know what they're going to eat because it's still on the menu. MG: And what kept us alive is the best soufflé in town. People come from all over for the soufflé. Even Le Grenouille, the top restaurant in the city, people say our soufflé is better than theirs.

This was a popular place with the publishing industry in the early days. RA: When we first started, all the publishing companies were here. We used to have an honored guest who used to come here, Jacqueline Kennedy, when she was at Doubleday. MG: She used to sit in the corner booth, because she thought no one would bother her. Chelsea Clinton was here a few weeks ago. She was here with a professor.

How long had Justice Sonia Sotomayer gone here before she was appointed to the Supreme Court? MG: She was a regular here, and she had a party upstairs before she left for Washington, D.C. She was so nice a lady.

You two simply decided to retire. RA: Yes, we decided 35 years was a good number and we wanted to retire while we were both still healthy. Not because we have to, but because we want to. MG: But one thing I would like to mention. Like a lot of our friends, we are not happy at all with the ABC [the restaurant grading system of the New York Department of Health]. I think that's ridiculous for New York City. And the Health Department, they are killing a lot of restaurants around the city. They come three or four times here. Each time they come, you have to pay a fine—$1,000, $1,500, $3,000. That's not fair what they're doing.

RA: They always find something. They always come when we're in service. They nitpick. It's like the traffic policemen. They have to give out so many tickets? It's very difficult. In order to have an "A," you have to be under 13 points. But a silly thing can put you over the edge. Before you know it, you're above 13 points. Then you get a "B." Nobody wants to put a "B" in the window. And now, what is happening because of the new system, you get people who take advantage of other people's misfortune. As soon as we had an inspection, we get a call. "Hello. We notice you got inspected by the Health Department yesterday. We saw you had so many points. We're offering our service."

What service? MG: To fix it. To tell us what we have to do. RA: All it is, is a big scam. We're not new in the restaurant business. We know what's going on. But a new person is going to panic and think, maybe I should have these people come. And they're going to pay them thousands of dollars. MG: A restaurant with an "A" is no better than one with a "C." Because a lot of those [inspectors], they don't know food. When you serve Gigot, leg of lamb, you can not put that back in the refrigerator. It should be served rare. And they don't know that. You know how we got one point? The coffee machine. The server did not clean the machine right away, and the inspector was here [to see it]. What, the waiter should clean the machine, or serve the coffee first? You serve first, no? I would like to talk to Mayor Bloomberg. He is wrong about this.

Are you going to be taking the decor with you? MG: No. Very little.
RA: Personal stuff. We're both from Brittany, so the [decorative] plates, we're going to take those.

Do you know what's going to come into the space? RA: Oh, yes. An Indian restaurant. Just what we need, right? They like the walls, because they want to make something high end, a little different. I guess it's supposed to resemble an old country home from their part of India. They're going to get rid of the bar and open the windows in front so you can see through. But the walls are going to stay. That's real wood. You can't even put in a nail, it's so thick.
—Brooks of Sheffield
· The Never Cool, Never Trendy La Petite Auberge [~ENY~]