A Design Tour of Lyon From Owner Francois Latapie

Share All sharing options for: A Design Tour of Lyon From Owner Francois Latapie 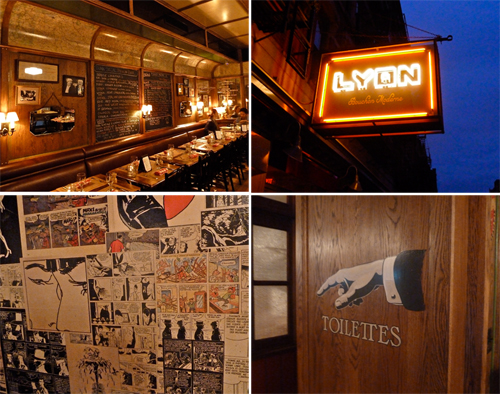 The dining room at Lyon is full of details from France's gastronomic past, and the personal history of owner Francois Latapie. The walls are covered in vintage restaurant maps, the shelves are full of statues and novelty items from old French purveyors, and the bathrooms are papered in retro comic strips that Latapie collected when he was just a boy. Here's a tour:

Francois Latapie, Owner: "I am a collector of many old things, and I have been collecting maps for the last 15 or 20 years. So, I have maps from the '20s, '30s, and '40s. I collected them because I wanted to open a restaurant based on the famous national set. It didn't end up going that way, but when I told the designer that Lyon was a stop on the map, he said he said, 'Okay, we're going to do something with that.' 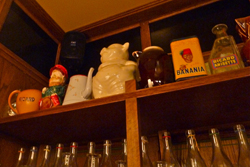 "When you go to a bouchon, there are usually some shelves filled with whatever the owner has collected. It's frequently based on things that were given to the owner that have to do with running a restaurant. Now, you buy six cases of beer from Budweiser and they say, 'Oh, would you like a Budweiser tray, or a sign for you window?" So, people were given all those free advertising things, and then they became old and very fashionable to collect, and now they're worth a fortune. There are $10 thousand worth of old objects in this room alone. 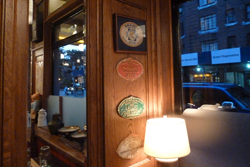 "Here are the medallions for first, second, and third places at the fair. You know, for best cow, best horse. 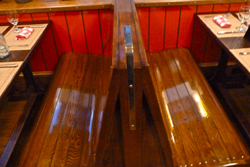 "Some of the bouchons would take seats from the old railways. We recreated them for the restaurant. This is exactly what you would see in the '70s.

"The bar is actually something that we had to add to the bouchon design, because a lot of the bars at those restaurants are like small service bars. We gutted the place and built this bar ourselves.

"I am a very big cartoon fan. I have collected cartoons all my life, and when I told the designers my idea about having cartoons in the bathrooms, they loved it. These are all French classic cartoons from the '70s, which is when I grew up. I spent a lot of money on them — too much, actually. I spent more money on cartoons than on my mother or my girlfriend. People think it's a really cool thing, because it's really French and yet it's not something that you see in Lyon. The ideal thing is for this to look like it's been here all the time. Our designers, Roman & Williams, their background is movie sets. So they have all of these people they can source for different things. They found this artist, I showed him all my albums, and he put this collage together."