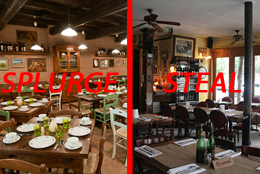 5) Osteria Morini/Malatesta: Michael White's rustic Soho trattoria is the kind of place where you want to order a lot of things and share them, which can be tricky on a budget — pastas are in the mid-to-upper teens, and entrees and chops are in the 20s and 30s. But for an authentic taste of Emilia–Romagna cuisine at a lower price, head to Malatesta in the West Village. This relaxed neighborhood restaurant serves a selection of simply prepared, fresh crostini for under $9, and faithful versions of gnocchi, ravioli and spaghetti for around $12. And for a more formidable dinner, there are fine steak, chicken and fish dishes in the teens and 20s, too. Although it lacks the bustle and high production-value of White's hot spot, the dining room at Malatesta features great big windows for people watching, and a laid back, Italian trattoria vibe. [Photo; Photo] 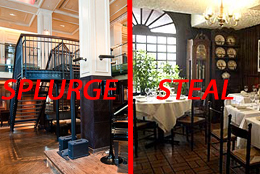 4) Millesime/La Petite Auberge: Critics love the charming dining room, measured service, and masterfully cooked French cuisine at Laurent Manrique's new Madison Ave. restaurant. But for a more gently priced night out in the same neighborhood, consider 33-year-old standby La Petite Auberge. The menu here leans more towards hearty brasserie staples than fish, and although some of the entrees may scrape the $20 range (premium steaks are also in the 30s), the restaurant offers an unbeatable $28.50 three-course prix fixe, with several great app and entree options, every night of the week. La Petite Auberge does not have an extensive raw bar selection, but you can still get cherrystone clams, a shrimp cocktail, or an elegantly sauced fresh filet for considerably less than at Manrique's restaurant. [Photo; Photo] 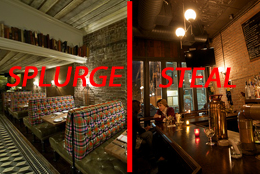 3) Mary Queen of Scots/Gordon Bennett: The new project from the Highlands team has a Blue Hill alum in the kitchen and a bizarre, cool dining room full of brick, warm woods and tartan upholstery. It's an ambitious restaurant, and not particularly cheap, so if you want a more traditional Scottish gastropub experience, head across the river to Gordon Bennett. Here you can also get a fine plate of mussels, and a burger or stew for a good $5-$10 less than at the other Scottish place, plus familiar favorites like fish & chips and bangers & mash, for under $15. It may lack the finesse of its LES counterpart, but with 20 reasonably priced beers on draught, and good Scotch behind the bar, Gordon Bennett is a fine choice for dinner and a drink at the start or end of your night out. [Photo; Photo] 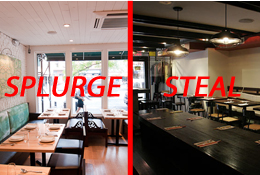 2) Kin Shop/Galanga: Harold Dieterle's foray into Thai-influenced cooking is a hit with the critics, and with the locals, too — the wait on weeknights can be over an hour, even for a seat at the bar. So, consider Galanga, just a few blocks away on West 4th St. as a back up. The dishes here don't have the same interesting compositions as the ones at Kin Shop, but the spices are dead-on, the chefs use very good ingredients, most apps are under $9, and the protein-heavy entrees are all in the low-to-mid teens. Galanga also rocks a cool, modern dining room and a beer, wine and sake bar, which elevates it a few notches above your average take-out Thai. [photo; photo] 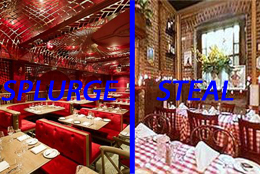 1) The Darby/Tello: If you're shut out of the Darby, the new project from chef Alex Guarnaschelli and a team of big nightlife backers, head to Tello just a few blocks away in Chelsea. Like the MePa restaurant, it's an ornate, Italian-influenced supper club that's designed to recall a bygone era. The food is fine, if not spectacular, but you can get any number of fresh raw bar items, steaks, chops, and pasta dishes, but here they're priced to enable you to order a lot of drinks (most entrees in the mid-teens), and have a good time with your friends. It's far from a scenester spot, but the restaurant group behind Tello has built a mini-empire in the neighborhood based on crowd-pleasing service and lively, convivial dining rooms. [photo; photo]