Tonight, Gabe Stulman's version of Fedora, an old school New York restaurant that was passed on to the Village restaurateur when the matriarch and owner retired last summer, opens to the public. It comes just months after Stulman opened his second restaurant Jeffrey's Grocery and weeks after he reopened his first restaurant Joseph Leonard following a fire. So, a busy quarter.

The new Fedora includes some of the original bones and fixtures—including much of the bar—but has a new floor, white tin ceilings, black leather banquettes and bar stools, and walls packed to the brim with art collector-level photography. The walls boast prints like Richard Avedon's famous Marilyn Monroe portrait, this portrait of Warhol and Basquiat, and other known works that we can't be troubled to identify.

As for the menu, fans of Stulman's other restaurants will notice this one is in the same vein as the others, but that Montreal import Mehdi Brunet-Benkritly has added a flourish or two. Expect sweetbreads paired with octopus, a warm beef sandwich, crispy pig's head, beef tartare, and oysters Rockefeller. 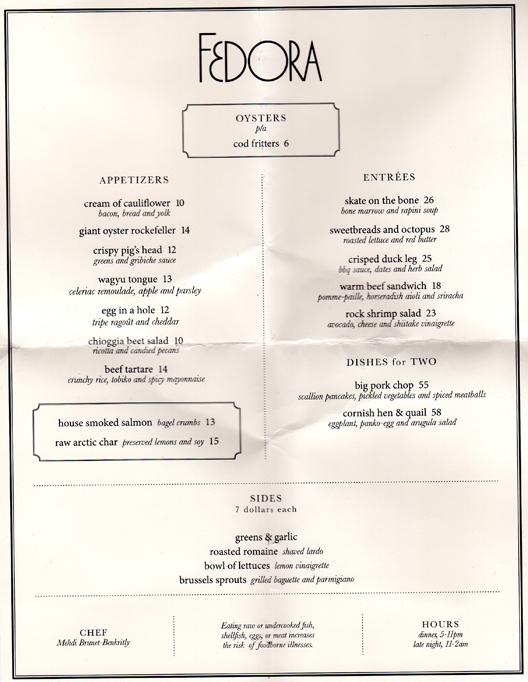