Tribeca Grill Practically Offering To Be Robbed Of Vintage Wine

Share All sharing options for: Tribeca Grill Practically Offering To Be Robbed Of Vintage Wine 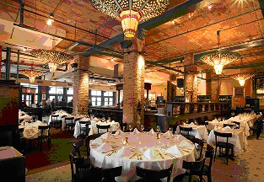 Tribeca Grill is home to the sort of members-only, old-school wine list that makes you want to max out your credit card and wear khaki. Fittingly, the 8,000 square foot space—which includes multiple banquet rooms and a screening den—is just a swimming pool and putting green short of a country club. In other words, the strange desire to wear Chinos isn’t exactly out of context.

But the wine list is a far cry from the standard country club menu of spritzers and overpriced bottles of Clos du Bois. In fact, it’s one of the city’s great, under-sung collections. Its steward, Nieporent-wide Wine Director David Gordon, is a member of the endangered species of lifelong sommeliers. He’s been with Tribeca Grill since it opened in 1990 and for 21 years he’s managed to build and maintain a jackpot collection of back vintage classics from Burgundy, Bordeaux, the Rhône, Napa, and Germany.

The current list is deep, crowding more than 50 pages with 1,800 selections that reach all the way back to 1900. But it isn’t just the biblical length and depth of the collection that make it noteworthy. It’s the list’s price tags, which often look more ’97 than 2011—a result of procuring wines on release and keeping mark-ups static as they age. Germany seems to have benefited the most as the collection of back vintage Rieslings under $100 may just be the best in the city. But it’s hardly the only tangle of fire sale wines that are just begging to be abducted. Even the list’s fancy claim to fame—a whopping 10 pages of Châteauneuf du Pape—includes a dozen or so back vintage bottlings under $125.

What you won’t find is anything off-the-wall. Gordon talks defiantly when wine conversation ventures into the fashionable and obscure. That’s Grieco’s bag, not his. But this sort of adamant classicism is precisely what has kept Tribeca Grill’s wine list relevant for more than two decades. It remains one of the city’s top ten wine lists and pretty much the only “country club” we’ve ever wanted to join.

Bang For Your Buck
Riesling Kabinett ‘Saarburger Rausch’ 1994, Zilliken $45
A brilliant value in mature Riesling from one of the most reliable Mosel producers. There’s plenty of back vintage Zilliken floating around town, but none this cheap.

Riesling Spätlese ‘Monziger Halenberg’ 2001, Emrich-Schönleber $55
One of the risings stars of Nahe whose wines are truly distinctive: feral, rich, and full of energy. Here from one of the great vintages of the last decade, at even better pricing.

Riesling Kabinett ‘Scharzhofberger’ 1999, Egon Müller $60
One of the Mosel’s top Kabinett bottlings, known for its incredible longevity. Penny for penny, the finest value on the list.

Châteaneuf du Pape 2000, Cuvée du Vatican $65
One of the many charitable giveaways tucked into the list’s monolithic collection of CdP. Unabashedly big, but in a spot that has allowed it to shed some lbs and show off its funkier side. A great value that requires an animal to counterbalance its power.

Côtes du Rhône 1996, Château de Fonsalette $75
One of three Châteaux in Emille Reynaud’s high-class brood (the others being the iconic Château Rayas and Château des Tours). This is old-school stuff: no temp control, no new wood, earthy, funky, and drinking in a great place now.

Rioja 'Viña Real Gran Reserva' 1996, CVNE $75
A chance to have some great ‘tradicional’ Rioja that isn’t quite as rustic the Lopez de Heredia wines. That is, there’s plenty of polished fruit here to buffer the funk.

Off The Beaten Path
Vermentino 2006, Tenute Dettori $64
This is about as obscure as Gordon gets. Skin-fermentated orange wine from the undisputed master of Sardinian wine. Funky, savory.

Crowd Pleaser
Sauvignon Blanc 2009, Long Meadow Ranch $35
One of the under-the-radar estates in Napa that is putting out great Cabernet Sauvignon and a cheap, delicious Sauvignon Blanc that is far more refined than most amped-up Napa SB. Clean, fruit-forward, and herbaceous.

Under $40
Riesling Kabinett ‘Piesporter Goldtröpfchen’ 2005, Von Kesselstatt $36
An excellent value from one of the Mosel’s great vineyard sites. Delicate, classic Kabinett with a few years under its belt. A whole lot of wine for under $40

Break The Bank
Riesling Auslese ‘Eitelsbacher Kronenberg’ #36 1979, Karthäuserhof $100
Another reason why German Riesling just may be the best value on earth. Mature Riesling from another one of the Mosel’s top producers for $100? No brainer.

Châteauneuf du Pape ‘La Crau’ 1989, Vieux Télégraphe $195
This is the zenith for rustic, old school CdP, here from a legendary vintage for the region. A perfect argument for that little thing called “terroir.”

Clos de Vougeot Grand Cru 1999, Méo-Camuzet $255
The inimitable Méo-Camuzet, one of Burgundy’s finest producers, here at fire sale pricing from one of the region’s most coveted Grand Cru sites. Call ahead for a decant.

Châteauneuf du Pape 1998, Château Rayas $285
One of the most famous, sought after wines in the Rhone (and in all of France for that matter). The 1998 is one of the most sought after vintage sin the last two decades, here at nearly half of what you’d find it for on any other list in town.

WTF?
Cabernet Sauvignon 'Darius II’ 2004, Darioush $280
A prime example of over-blown, over-priced Napa Cabernet. Easily the biggest bonehead wine on the list when you consider the fact that 11 year-old Grand Cru Burgundy from one of the region’s top producers will run you less than this ogre of a wine.
[photo credit]