The Gibson, a Hipster Bar With No Hipsters

Share All sharing options for: The Gibson, a Hipster Bar With No Hipsters 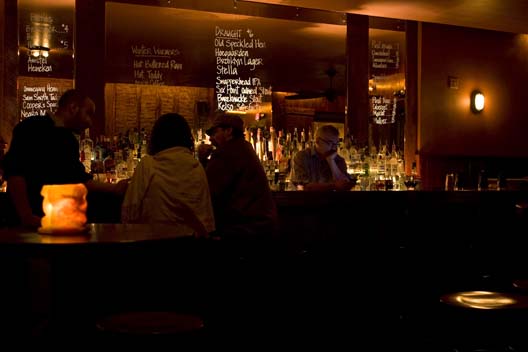 [Photo]
The Gibson's presence is announced by a brass plaque to the left of the door, like it was the Yale Club or something. That's OK. I would picture a bar that names itself after the Martini's quirky cousin to be a kind of class act, all 1930s elegance and chrome. But the interior confounds that expectation. It's wide, deep and woody, and vaguely blue-collar. There's a fireplace with a fake fire in it, a dart board, a foosball table, video poker and a plasma TV tuned to hockey coverage.

It's a place that screams: beer drinker. And, indeed, everyone is drinking one of the eight drafts, which include locals (Kelso) and nationals. Fine. Except the bar menu is filled with interesting things that nobody is drinking. There's a cocktail list that is not for the uninformed. A Sazerac can be ordered, a Brooklyn, a Scofflaw and, of course, a Gibson, complete with pearl onion and Plymouth Gin. Thirty Bourbons ranges from $5 a pour to $35. There's a good list of ryes and Irish whiskeys, and even five different Tennessee Whiskeys, for Christ's sake! (There are only two makers of Tennessee Whiskey in the U.S.)

All that liquid wealth, but one senses that few take advantage of the bounty. The coming festivities surrounding the Super Bowl are made much of through paper flyers posted here and there. There will be cheap beers and cheap chili, complete with Fritos. Advocates on Yelp cheer about the lack of Wburg hipsters in this joint. They're right. Despite the exposed brick and neat backyard patio and haute liquor list, this is a regular bar. There's no attitude. No pose. When I asked if there was anything to eat, I was handed a folder stuffed with Chinese and Mexican take-out menus. It's as if the owners planned a hipster bar, but no hipsters showed up.
—Robert Simonson