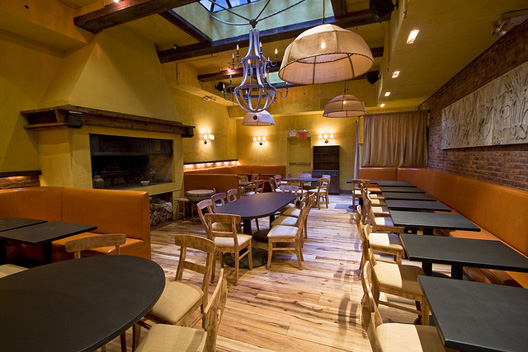 When Ciano and Bar Henry’s Wine Director John Slover first introduced his idea to offer more than half of his wine list by the full or half-bottle at Bar Henry, it seemed almost too good to be true—and maybe even a little crazy. Opening half a bottle and leaving the other half to move by the glass is risky business, especially in Slover’s case. He is popping back vintage wines, many of which will not hold overnight, so it’s a hustle to sell the rest by the end of service, particularly on something fancy that might grace the by-the-glass board at $25-50.

But it’s also the best thing to happen to NYC wine drinkers in some time.

Slover gained an immediate following for the restaurant. Not only was the selection deep and well-curated upon opening, it was cheap—and even cheaper if you consider the opportunity to cut the cost in half on something like an ’85 Chateau Fieuzal or ’01 Texier Cote Rotie. Plus, he’s just a hard man to say no to.

By the time Ciano opened two and a half months ago, Slover had inspired a trend. Burger & Barrel, the Counting Room, Lotus of Siam, and others have adopted the halfsie model, and there’s no telling how many others will jump on the bandwagon. Let’s hope, for our sake, that it’s got plenty of gas in the tank.

Slover, who cut his teeth at Cru during its heyday, has now put together his second list with the same concept at play. This time he’s teamed up with former Cru alumnus, Chef Shea Gallante, and has adopted a focus on Italy. At present it’s skinnier than Bar Henry’s more inclusive Old World ode, but the spirit and depth of the list he put together downtown is still very much intact. Here you’ll find a beefier “Reserve List”—the portion that is not offered by the half—which volunteers plenty of wines that tempt in the $200 range, particularly those from Piedmont. For anything under that, bang around the “Market List”—which offers everything by the half—where there are plenty of wines that hang near $100 like ’00 Trevallon at $118/59 and ’01 Mastroberardino Taurasi at $115/58 that are good enough to build a meal around.

This great list is what makes Ciano as exciting a place to drink back vintage Barolo as it is to drink cheap Vermentino. Slover has proven that he is one of the city’s great talents and someone who is now directly responsible for inspiring others to make this city a better place to drink in.

Weller Lehnert Kabinett ‘Goldtröpfchen’ 2001 $52/26
Small producer working in one of the Mosel’s prime spots. The 2001 vintage produced some of the greatest German wines of the last decade and this is likely in a prime, laid back state at present.

Nebbiolo d’Alba ‘Valmaggione’ 2006 Brovia $69/35
Brovia is one of the greatest small producers of Piedmont. Though the wine is labeled Valmaggione it is, perhaps for the sake of confusing us all, from the Valmaggiore vineyard in Roero. Elegant Nebbiolo that's a bit leaner that what you find further south in Barolo and Barbaresco. Will show well with a little decant.

Bourgogne 2007 Ramonet $64/32
Bourgogne Rouge from one of Chassagne Montrachet’s best producers. Though the region is known for its whites, the Pinot Noir production is hardly slouchy. Lean, floral, classic.

Off The Beaten Path
Tai Rosso 2009 Rezzadore $40/20
Tai Rosso is a synonym for Tocai Rosso a grape that has been lurking the hills above Vicenza and is rarely seen in the states. Though it bears the same name, the grape is not related to the white grape Tocai (now Friulano) found in Friuli. Light, high-toned, chuggable.

Crowd Pleaser
Cicala del Giglio 2009 Testamatta, Tuscany $48/24
This is 100% Asonica from one of Tuscany’s great winemakers, Bibi Graetz. The grapes are sourced from the Isola del Giglio, a small island of the southern coast of Tuscany. The grape is identical to Sicily’s Inzolia and shows the same fruit-forward character, with the acid of a cooler climate and is bound to make peace with a motley collection of palates.

Under $40
Gaglioppo 2009 Statti, Calabria $39/20
Southern Italy’s favorite contradictory varietal, Gaglioppo is half delicately floral, herbaceous, and half broody, dense fruit. A more sensitive take on the variety that is the best introduction to the joys of the grape that the market has to offer.

Break The Bank
Puligny Montrachet ‘Perrières’ 2004 Carillon $188
Louis Carillon has put out Pulignys of haunting depth. Combining a dense core of lush ripe fruit with the inherent precision and minerality of Puligny, Carillon has managed to create a competition of atmospheric proportions.

Fontalloro 1995, Felsina $159
One of Tuscany’s great 100% Sangiovese bottlings. The fruit comes from several plots within the Chainti Classico and Chianti Collie Senesi zones. In a mellow spot, drinking at its peak. An excellent introduction to one of Italy’s great expressions of Sangiovese.

Produttori Barbaresco 1982 $241
Produttori is the standard bearer of quality classic Barbaresco at reasonable prices. The 1982s have been drinking in their wheelhouse for the past few years and this is a beautiful example of the classicism and delicacy of the vintage.

Barolo ‘Rocche’ 1995 Brovia $185
Wine nerds in the know have been gobbling up Brovia’s great traditional Barolo for years now. In general, the 95s—which are often overshadowed by the stellar 96 vintage—are lean, easygoing and show plenty of complexity at reasonable (in context) prices.

WTF?
‘Tignanello’ 2007 Antinori $265/133
This is about the only wine on the list that is noticeably overpriced. It’s one of Italy’s iconic Super Tuscans and one that will probably still fly out the door, but it’s simply not worth the coin at this age and at this price.