CB2 Weighs in on Projects from Rayuela, Jimmy Chin, More

Share All sharing options for: CB2 Weighs in on Projects from Rayuela, Jimmy Chin, More 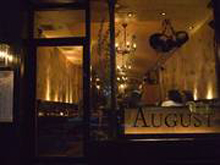 Community Board 2 met last night to discuss liquor licenses and maybe there were some applicants who were afraid they'd be walking out into a winter storm at midnight (or later!) because there were six applications laid over, three withdrawn, and two no-shows. Lucali and Nello (which already faces neighborhood opposition) did not present. Co-chair Richard Stewart joked that perhaps "they're all out having a drink instead" prompting another committee member to respond "not at any of those places!" In the end, only eight applications were heard, two of which were also laid over when it was determined that their applications were incomplete. Despite the shortened agenda, the meeting still managed to run nearly five hours, something that the co-chair wryly admitted shouldn't be happening.

1) First up for the night was Marumi, a Japanese restaurant looking to extend their license to the 10 seats in their enclosed garden. After agreeing to close the garden earlier at 10 PM and with a proven track record, it sailed to a unanimous approval.

2) The folks behind bar/restaurant Blue Haven, one of whom serves on CB3, came before the committee to request an extension of their Sunday - Wednesday hours to a 4 AM closing. What they didn't expect was that they'd be asked, as a condition to staying open that late, to keep their kitchen open until they closed. Yes, until 4 AM. The three owners were taken aback but ultimately agreed after a minute of deliberation. Despite making that concession and their proudly mentioning they'd help the local police solve two crimes since they opened, the committee was unswayed, voting to deny their application.

3) The owner of August showed up to request an upgrade to a full liquor license. Like Marumi before them, there were no complaints from the community and was easily approved by the committee.

4) The first, only real vocal opposition of the night came during the presentation for Jimmy Chin's, a self-described "dim sum restaurant/tavern" at 481 Washington St. Co-owner Stephen Breskin was there for the second month in a row, this time with a board member in tow for support. It was going well at first - there was talk about how well the soundproofing would work and that the Friends of Hudson Square were in support of the restaurant. When it was opened up to comments from the audience, things quickly went south. A neighbor in the adjacent building spoke about how he was unhappy that he hadn't heard of this project until just recently, with very little signage in the area to signify as such. He came armed with a petition that included 62 signatures, all in opposition to the restaurant. Breskin was put off by the admission from the neighbor that he was objecting without really knowing anything. With the possibility of further neighborhood outreach, the committee chose to deny the application with a suggestion to Breskin that they lay it over once again.

5) Restaurateur Hector Sanz and chef Maximo Tejada, partners at Rayuela and Macondo on the Lower East Side, sought a full liquor license for Quimera, a Spanish restaurant in the space formerly occupied by ArtePasta and Lips at 81 Greenwich Ave. (a space Stephen Starr recently applied for). The major problem the committee had? That the new restaurant would be using up all 5,000 square feet of space occupied by the two former businesses, serving paellas in the front and basement and fine dining in the back. With the listed number of seats of 180 and an exit that opened up onto Bank St., there were the obvious concerns the amount of foot traffic the smaller street would see. It was suggested that the owners consider laying it over until more community outreach was done and the traffic issues were resolved. Seeing the writing on the wall, the owners decided that would be the wiser play.

6) 68 West 3rd St. Cafe, the long-vacant space formerly occupied by Fuelray, ran into some problems in their quest for a full liquor license. They wanted to be open until 4 AM on weekends but were asked to curtail their hours to 2 AM, at least for the time being. Their lack of a floor plan didn't win them any fans, and neither did their assertion that they never said there would be no televisions when they met with a neighborhood association. This application did bring out the snark among the committee members. One member asked how the owners planned on closing the bar each night; when another member saw that the owners weren't sure what was being asked, he remarked "what, like how they're gonna yell out last call?" The owner of Marumi was there to voice her concerns since they would be neighbors and she surmised that putting the word "cafe" in the name was misleading and likely led to a lack of community turnout to oppose them. In the end, the owners decided to lay their application over due to insufficient details.

7) The final applicant of the night was Wong Hospitality Group with their plans to open an Asian restaurant at 7 Cornelia St. It'll have 38 seats total, 32 of them at 10 tables and six at the bar. Wong, the owner, rattled off some tasty menu items like suckling pig which he hopes to be able to source locally, from within 200 miles of the city. The restaurant will also have a custom-made wood-fired pizza oven which he'll be using to make Asian pizzas. When asked why there was a need for a liquor license and not just beer and wine, Wong responded "fruity cocktails? for ladies." His earnestness and general good nature won the committee over as they voted unanimously to approve.
—Gary Wong
· All Coverage of Community Boards [~ENY~]
[photo credit]