How to Pose for a Chef Photo: Seven Hot Looks

Share All sharing options for: How to Pose for a Chef Photo: Seven Hot Looks

If you're a chef who spends most of the day toiling in the kitchen, a photo-op can be a pretty scary proposition. But, if that chance for a bit of media exposure does come your way, there's no need to fear: the work has already been done for you. Here are seven sure-fire chef looks for in front of the camera, time tested by some of the city's hottest cooks.

[Momofuku's David Chang, Seamus Mullen, Fishtag's Ryan Skeen, Jimmy Carbone of Jimmy's No. 43]
If you're a nose-to-tail chef, it's never a bad idea to pose with a baby pig. Apart from a certain eye-grabbing-factor, this will help communicate your thoughtful, sensitive side. Yes, an adorable animal is dead, but you're going to make sure its life was sacrificed for a good reason: delicious food.

Off to the Market:

[Jean-George Vongerichten, Locanda Verde's Andrew Carmellini, Eric Ripert, Annisa's Anita Lo]
A photo shoot at the market is a great opportunity to show off your personal style, while still looking like a professional. After all, you may not be wearing those grubby whites, but you are getting in touch with the produce and the people that really make the food at your restaurant so special.

[FishTag's Michael Psilakis, Daniel Boulud, Salumeria Rosi's Cesare Casella, Mark Ladner and Anne Burrell]
Kitchen life is full of stress, but there's no need to take that with you to the photo shoot. Just think of a funny joke, and show off those pearly whites. 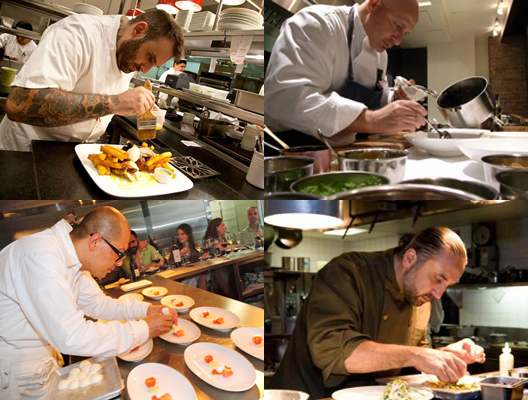 [Clockwise, from the top: Nuela's Adam Schop, Tom Colicchio, Brooklyn Fare's Cesar Ramirez; Hearth's Marco Canora]
This shot, taken at the moment that the food is about to leave the kitchen, makes you look like a culinary bad ass. For the full effect, make sure to create a triangle shape with your head, your elbow, and the plate.

[David Burke, The Darby's Alex Guarnaschelli, Burger & Barrel's Josh Capon, Kin Shop's Harold Dieterle]
Some chefs are afraid to leave the kitchen. Others love greeting their guests with a big plate of food. Which one are you?

[Ai Fiori's Michael White, Rocco Dispirito, wd~50's Wylie Dufresne, Red Rooster's Marcus Samuelsson]
If you're camera-shy, it's never a bad idea to pull in a prop or two. It helps loosen things up and show that you have other passions outside of the kitchen like sports, music, or travel.

[Jean Georges' Johny Iuzzini, Marc Forgione, The Breslin's April Bloomfield, Shang's Susur Lee]
And if you really just want to look like a rock star, don't hold back. Work it, give the camera all you've got. Nobody's expecting you to look like a young Bruce Springsteen or anything, so just go for it — you've got nothing to lose.
· All Previous Editions of Hot Looks From Hot Cooks [~ENY~]