Ai Fiori Gets The Master-Somm-In-Training Treatment

Share All sharing options for: Ai Fiori Gets The Master-Somm-In-Training Treatment 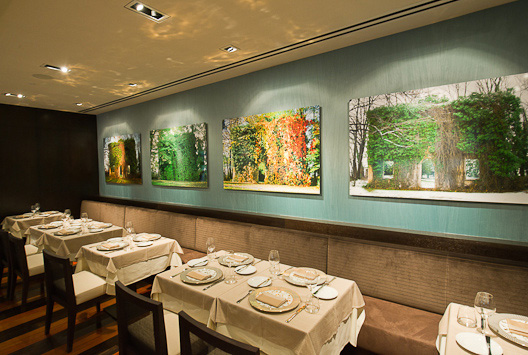 According to its website, Ai Fiori, a “signature restaurant,” is the “modern, fashion-forward choice for dining and nightlife enthusiasts.” It’s also Michael White’s newest exercise in haute Italian cuisine, as well as his first restaurant in a hotel, which might explain its Club Med-esque online presence. This time White is focusing on the Italian Riviera, but he also does a reach around to grab influence from neighboring Provence. For this exercise, he’s lassoed Hristo Zisovski from Jean Georges, where Zisovski has spent the last five years—a veritable eternity in somm years—as Chef Sommelier.

This is the first wine list Zisovski has written, which is somewhat of a surprise given that he’s just a blind tasting away from becoming one of North America’s 106 Master Sommeliers this July. But in true Master-Sommelier-in-training form, he’s put together a technically sound wine list at Ai Fiori, not to mention one that’s remarkably complete for a restaurant that’s just opened.

At present the list hovers around 600 selections, nearly half of which compliment White’s culinary theme, highlighting wines from Southwest France and Northwest Italy—two bastions of value and present innovation. The latter category is fairly new territory for Zisovski, who spent a whole heck of a lot of time with Bordeaux, Burgundy, and California Cabernet at Jean Georges. Also new territory for him: the opportunity to pass along value; the mark-ups he had to work with at Jean Georges could make a grown man cry.

Here he’s priced 40 percent of the list under $100, and the mark-ups remain standard to below standard on some of the back vintage treats. What he’s carried over with him, however, is a penchant for the big names. You’ll find them among the short collection of Burgundy and what is perhaps too much Châteauneuf du Pape—at least for the cuisine and concept at work here. But then again, let’s face it: the “nightlife enthusiasts” love their CdP.

What’s most striking about the list though, is the sense of perfectionism that it’s so obviously a product of; it’s cerebral and methodically planned. There are some let downs of course: the Barolo section is missing most of the region’s finest producers—both on the high and value end—and the CdP section is bordering on overkill. But what the list lacks is small in comparison to what it achieves: it’s deep and expansive, covering a lot of ground, but managing to avoid losing the reader—a feat that’s nearly impossible with a list of this size.

Bang for You Buck
Colli Tortonesi Timorasso "Derthona", Claudio Mariotto 2007 $58
Timorasso, a covert variety that straddles the border between Lombardia and Piedmont, is just now starting to make a dent in the NYC market. Medium bodied, citrusy, with great texture. A brilliant, versatile wine for the price.

Riesling QbA "von der Fels", Keller 2008 $64
Easily one of, if not the best, producer of dry Riesling in Germany. The von der Fels is perhaps the estate’s best value and is made in small quantities. A seriously stunning, classic bottle of Riesling from the excellent ’08 vintage that drinks much beyond its price point.

Gattinara, Vallana 1999 $60
Intense, traditional Nebbiolo from Piedmont’s northeastern corner. Wines from Gattinara undergo an aging regime similar to that of Barolo, but the wines tend to be just a bit leaner. Excellent example of how much value is to be had in the northern Nebbiolo territories. Here from a stellar vintage drinking well now.

"Il Granaccio", Bisson 2008 $58
100% Grenache from the Italian Riviera that stands as a testament to how well this grape does here. A totally unique expression of the variety: concentrated, hugely aromatic, and lithe.

Saint-Chinian "L'Engoulevent", Yannick Pelletier 2008 $54
Yannick Pelletier never went to oenology school and instead decided to study under the winemakers that inspired him. He spent time with Didier Barral of Leon Barral in Faugères and the Cuilleron-Villard-Gaillard trio in the Northern Rhône. He gained respect for organic and biodynamic in the vineyard and a non-interventionist approach in the cellar and has applied his experience to create honest wines. This is a blend of old vines Grenache, Syrah, and Carignan.

Crowd Pleaser
Roero Arneis "Vigne Sparse", Giovanni Almondo 2009 $51
On the other side of the river from Barbaresco lies Roero, a region known for Nebbiolo and Piedmont’s sort of famous Arneis. Clean, mineral-driven and floral with enough fruit to make it a win with a motley crew.

Off The Beaten Path
Ruché di Castagnole Monferrato "Laccento", Montalbera 2008 $62
Considered one of Piedmont’s lesser varieties (along with Brachetto, Pelaverga, etc.) behind the big three (Nebbiolo, Barbera, and Dolcetto), Ruchè can be an excellent go to for value—if you can find it. Intensely perfumed and light as a feather.

Break The Bank
Henri Goutorbe, Brut Grand Cru "Special Club", Aÿ 2002 $150
Champagne’s Special Club is a group of 26 Grower-Producers who are all dedicated to the expression of terroir in Champagne. The Special Club bottling, which comes in a very special bottle, is considered to be the best offering from each grower. Goutorbe’s ’02 is a blend of 70% Pinot Noir and 30% Chard and is in classic Goutorbe form—at once rich, highly aromatic, and structured for aging.

Paitin di Pasquero-Elia "Sori' Paitin" 1996 $196
Intense, broody Nebbiolo from one of the standard bearers in Barbaresco, located in the hills above Neive. Giovanni Pasquero-Elia’s wines find a balance between modern and traditional, maintaining Nebbiolo’s classic profile. Though many of the ’96s are still under lock and key, this is showing well now.

Morey-Saint-Denis "Vieilles Vignes", Hubert Lignier 1996 $312
Heady old-school Burgundy from one of the great classicists. Undoubtedly in a great spot now and a win for those who like their Burgs a little stinky.

WTF?
Sicily is given just two spots in the white wine department and both are handed over to Chardonnay (one that tops out at over $100). There’s already grip of Chardonnay from Burgundy and California that is far more worthy of a Benjamin drop. Why not use this space to highlight Carricante from Etna or one of many takes on Grillo that offer a bit more bang for the buck?
· Previous Edition of Decanted [~ENY~]