When 21-year-old tourist trap Gonzalez Y Gonzalez closes at the end of the month, New York will lose one of it's most over-the-top pieces of restaurant signage: the infamous giant neon sombrero. Here are 10 other places that will vie for the position of most eyeball-searing marquee, once that eatery is no more: 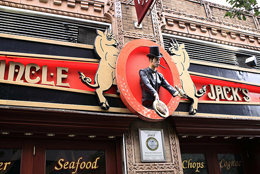 10) Uncle Jack's Steakhouse: The strangest thing about this crest-style sign is the incorporation of a tuxedo-wearing, cigar-chomping 3D man, bending out onto the street to offer passers by a plate of beef and a bottle of wine. You probably won't find such a fellow inside, but you may see the owner of the restaurant, who is an even more abrasive, cartoonish character. [photo] 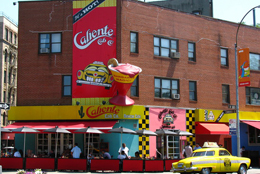 9) Caliente Cab Co.: This West Village tourist trap gets big points for its 10 foot tall pina colada, and incorporation of pastel and taxi motifs. And in case you were wondering, the mustachioed car character was prominently featured in the Spanish language Who Framed Roger Rabbit? knock-off ¿Quién engañó a Roberto El Conejo? [photo] 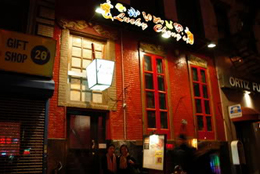 8) Lucky Cheng's: This East Village Chinese restaurant and cabaret, which boasts a nightly drag queen review, went for a mix of old and new with their signage. The neon banner at the top is a throwback to the great restaurant signs of Chinatown, just a few blocks south. The glowing white takeout box is a nod to the decorations found inside NYU dorms, just a few blocks north. [photo] 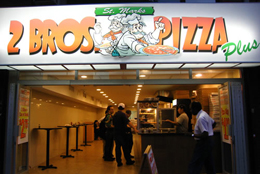 7) 2 Bros. Pizza: The two brothers behind this dollar slice joint are actually the cousins of Chef Boyardee. They come from the more heavily-stereotyped side of the family. [photo] 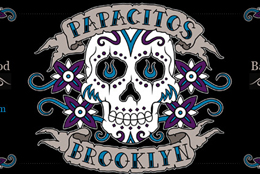 6) Papacito's: This Greenpoint Mexican restaurant recently replaced their festive, fiesta-like green awning, with this one, depicting a foreboding "Dia De Los Muertos" skull figure. It's a sobering reminder that death comes for all of us. Sometimes, even in the middle of $2 taco night. [photo] 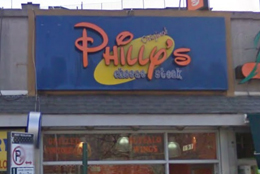 5) Philly's: Nothing makes you crave a cheesesteak like Walt Disney. 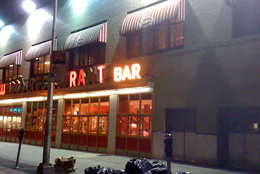 4) Junior's: The massive block-long sign at this popular Brooklyn diner is actually pretty charming. Except when the letters blank out and spell "RAT BAR."[photo] 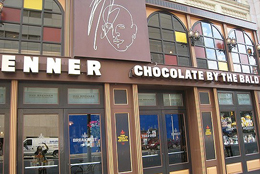 3) Max Brenner: Chocolate by the Bald Man: We're all for giant drawings of fake chocolatiers and everything, we just don't know what the hell that scribble is by his forehead. Were they trying to put hair on the bald man? Doesn't that sort of negate the whole naming convention of the restaurant? Is that his famed signature? [photo] 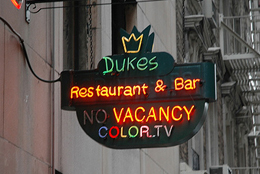 2) Duke's: Who knows if there's a real guy named Duke behind this Gramercy sports bar and grill, but that's sort of the point: Duke is whoever you imagine he is. And judging by the sign, he is either: A) the owner of a motel, who likes to make burgers. B) One of the lesser-known characters from Animal House. C) Judghead's older brother. [photo]
1) Pulino's Bar & Pizzeria: One of the best signs in New York, or one of the worst, depending on whether or not this is happening: