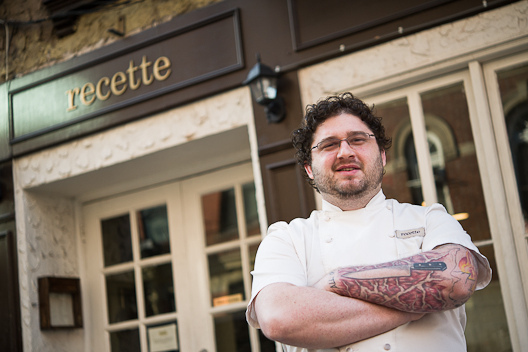 By the time Jesse Schenker opened Recette last January, his vision of elegantly composed small plates had already been tested and refined over the course of several years. Originally, Recette was a pop-up supper club done in collaboration with Per Se pastry alum Christina Lee in a bakery in East Harlem. After making the move to catering, Jesse drew up a business plan, signed a lease, and opened, along with Lee, in the old Jarnac space on West 12th St. Jesse has been at the pass of his tiny kitchen every night, working on each plate while keeping an ear to what's going on in the dining room. We recently sat down with the 28-year-old chef/owner to chat about the first year of Recette and the road ahead.

Jesse Schenker, Chef/Owner: The concept of doing elevated food in smaller portions, in a casual atmosphere was always what I wanted to do. I came to New York from South Florida, I staged around and took a job at Gordon Ramsay at the London Hotel. I was living in East Harlem, and every day I walked by Savoy Bakery on 110th and 3rd, and would come in for coffee on the way to the train. The owner Brian Ghaw would always be there, we started chatting, and one day he saw my tattoo and asked where I worked. It sparked a conversation. He liked food, but he didn't cook. He was more of the operations guy, but he had a friend who he met through someone else, Christina Lee, who was working at Per Se in the pastry department. One day, just for fun, we went to Fairway market and just bought some stuff and cooked it after hours at the bakery. The response from our friends was so strong.

How did you finance these dinners? Did everyone just pitch in? Yeah, everyone did. And at one point, we all put in a thousand dollars, and got incorporated. We were inspired by Thomas Keller, that kind of ten course, little portions, burst-of-flavor, move-to-the-next thing style — we just wanted to emulate that. There's nothing bad about that. We got a group of people in the bakery, we networked a little bit, and somebody from Daily Candy happened to come in for dinner one night. We didn't know it, but the next day we got a call from her, and she said she was going to publish a piece, and asked for our contact info. It was like a paragraph long, but it was so perfect. No exaggeration, the phone and the e-mails started going crazy. Now, I was still working full time at Gordon Ramsay, Christina was working as the pastry chef at Falai at the time, and Brian was still doing the bakery. We didn't know what to do, and I told everyone that we should just quit our jobs. I got a lot of shit from my boss who was like "Are you working for them, or are you working for me?" And I said "Them is me, and I'm giving you notice." Then, we found that people were requesting that we go to their apartments. So we were going into these really fancy homes, we'd set up a kitchen in a hallway and cook.

How did you make the leap from catering to a brick-and-mortar restaurant? After doing dinners for a while, I told my girlfriend that we had to start working on a business plan for a restaurant. I called my dad and said "I had an epiphany! I want you to be my business partner." He was trying to retire, but he said yes, and that was it. I brought him on board. He read over documents that I didn't understand, legal agreements, he helped me raise money, and figure out how to structure everything. We worked around the clock, I never slept. I was up at 7AM in here with the contractors, every day. It was a hell of a ride.

Did the concept stay the same through the build, and when you opened? Yes, the concept stayed the same. It still is the same. The concept of smaller plates and not having a starter or an entree — you get some snacks, get some plates, get a side — that's something that will always be with me. Because there's nothing I hate more than going to a restaurant and getting a huge plate of food and after six or seven bites, you're sick of the flavor.

Were you at all concerned that small plates might not be what diners wanted at the time? Really early on, people — bloggers — were saying, "Oh the food is really good, but it's overpriced for the portions." And it was really only about a few isolated dishes. So we decided to make the portions bigger. Some things we changed, some things we didn't, but it was always just about the portion size. Every dish on this menu is completely composed. You have your protein, you have your sauce, you have your crunch factor, and you have some kind of vegetable.

Did people check out the restaurant from the start? Yeah, we were very busy from the shoot. January to early February, it was great. And then mid February to early March, it died down. We got a little nervous, and then Frank Bruni came in. I recognized him from the get-go, I started shaking like you wouldn't believe, but he wasn't the critic anymore. But I remember hearing him, because the restaurant was empty, and he was sitting at this end table right near the kitchen. I remember him saying "Oh, this pork belly is divine." A week to the day, in walks Sam Sifton. He came in three times in a matter of weeks. I'm panicking, I'm shaking, I'm nervous, and we're slow. We're in that slow period, but then the review came out, it was two stars, and it was unbelievable. Everybody here puts so much energy into this place, day in and day out. So, when we read that review — I cried, my wife cried, we were hugging. It was such a great moment, I couldn't believe it. I don't want to be a celebrity, all I want is respect from my peers. And he got it, and he said it. And then after that — small plates, pricey plates? We never heard it.

What are some of the challenges of working in a kitchen that's so small? Breakage is big. Because of the level of volume, we bump into each other and things get broken. But we really have a tight ship. If you stood at the bar and peeked into the kitchen when we're busy, it would look kind of like we're just bored. But we're not, we're groovin'. We opened with like eleven plates, and now there's over 20. It's a lot of plates and in terms of dishes and components, nothing overlaps. Everything's different. So, we're really involved, we're all in sync. I call my cooks "The Dream Team." They're great.

Does it seem like it's been a year? Yeah, I guess? It seems like a year because the calendar says it's a year.

What are your future plans for Recette? Just keep doing it. Just keep evolving. It's grown so organically. I feel like when I obsess about something too much, it blows up in my face. But if I just sit back, I know what I want to do and the bricks just kind of line themselves up. Who knows what the future holds? I just want to keep cooking.
· All Recette Coverage [~ENY~]
· All Previous Editions of One Year In [~ENY~]