Share All sharing options for: Eataly Ain't No Drinkaly

Welcome to Eater's column, Decanted, in which WineChap's Talia Baiocchi guides us through the treacherous world of New York wine lists. Today: Eataly. 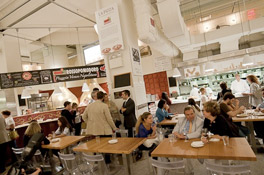 Eataly is big, yes, and polished, but there is a genuineness about the place. The very European magnitude of people drinking at noon, the clanging of coffee cups and plates, the hum of the midday bustle, and the amount of Italian spoken (have they been planted here?) make you feel as though you’ve stepped across the Atlantic. Even the frequent emergence of fanny packs and tube socks doesn’t blow Eataly’s cover; dorky looking white people are, after all, a feature of traveling abroad.

We already know what the food is like. One more blogger likening the place to a wet dream is going to put the Internet in danger of exploding. Rosso Pomodoro’s U.S. debut has given those hell-bent on discussing NYC pizza once a day, everyday, something to gush over for at least a month. And yes: the Gorgonzola could probably bring Ichabod Crane to tears. But Eataly is Italy, so this is all expected. What Eataly is not, however, is Drinkaly.

The Eataly-wide wine program (including the buying for the shop) is headed up by former Otto Wine Director Dan Amatuzzi. As talented as Amatuzzi has proven himself to be, the lists here do him no justice. In the piazza—where one can belly up to one of two bars or standing tables for crudo, cheese, and salumi—the wine list offers a full page of around 50 wines available by both the bottle and glass, ranging from $6.80-$64.80/glass, with most falling in the high teens. There is also a section dedicated to Fontanafredda wines, offered in 500ml or 1L quantities. This large Piemontese producer, which pumps out a bunch of wine—most of which, for the price, pales in comparison to its smaller regional counterparts—has a curious monopoly.

As expected, the Bastianich wines are highlighted too, and you can order a glass of the B&B standards Vespa Bianco and Vespa Rosso at a completely insane $25.80 and $28.80 per glass, respectively. There are also some pricey yet snoozy sparkling wines from Ferrari and Monte Rossa. Overall, little warrants a trip above $15/glass (or $15.80?), and you’ll do better with whites than with reds.

Past the piazza and through to the pasta and pizza hangout, you’ll find a list of mostly the same wines, but with an abridged by the glass list (24 ranging from $7.80-$38.80) in exchange for a longer list of wines only offered by the bottle. Based on the way the wines are priced and poured, it makes financial sense to spring for a bottle if you’re more than one: a bottle of Zamo Bianco will run you $35 a bottle, while a glass easily consumed in 15 minutes will set you back $11.80. Again, here it pays to stay on the cheap end of things.

For now we’ll let Eataly’s fine dining nook, Manzo, sort itself out. At first glance, it too pledges allegiance to Fontanafredda and a few other less-than-exciting mega-producers. Nevertheless, there are three sommeliers on hand to tend to the list, and if they are given the freedom to wiggle around the corporateness of the place—or better yet, use it to their advantage—there’s a chance something unique might emerge. For now though, judging by the current lists, the wine program at Eataly is a minor player in a bigger picture that is clearly more about the food.