Share All sharing options for: The Secret Hollywood Lives of Five NYC Restaurateurs

Sometimes owning a restaurant in New York is the second calling of people who struggled to make a name for themselves in Hollywood, either in front of or behind the camera. For a few restaurateurs, it’s the other way around: they get into acting and filmmaking after having already opened successful eateries. Here now is a look at five New York restaurateurs who have flirted with Hollywood fame: 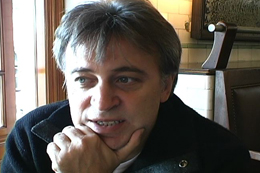 5) Keith McNally: The man behind Balthazar and Pulino's has had a long, somewhat sordid career both in front of and behind the camera. As a young man in London, Keith was discovered by a producer while working as a bell hop, and cast in a Michael Redgrave production of the Life and Times of Charles Dickens. Years later, in the late eighties after opening and then selling a few restaurants in New York, Keith took some time off to dabble in filmmaking as the writer and director of two movies. The first, End of the Night, about a man who goes through an existential crisis when his wife gets pregnant, eventually screened at Cannes and became a big hit in Europe. His second film, Far From Berlin, an art house flick starring Armin Mueller-Stahl, was not so successful. Of the latter, McNally said "At the time I was living in Paris and going through a divorce, so I don't have the best association with it. But the film flopped and it was entirely my fault." Earlier this year Keith noted that he hasn't watched any of his films in "more than fifteen years." There is also apparently an unproduced McNally script called Fidelity. [Photo] 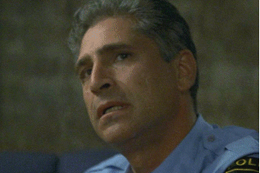 4) Frank Pellegrino, co-owner of Rao's: Frank Pellegrino has been working at Rao’s, the legendary, impossible to get into Italian restaurant in East Harlem, since he was a young man trying to make a name for himself as an actor in the seventies (he originally came on board to help out his aunt, the wife of third generation owner Vincent Rao). Now he’s the public face of Rao's, the author of its cookbook, and the man in charge of its extensive branding (think pasta sauces). But he still pops up in the odd on-screen cameo from time to time, frequently playing gangsters, crooked police officers and politicians. His combined resume includes small, but memorable performances in Broadway Danny Rose, Manhattan Murder Mystery, Law and Order, Celebrity, Mickey Blue Eyes and Cop Land. Frank also has the unique distinction of being one of the handful of actors to have appeared in both Goodfellas and The Sopranos. [Frank in Cop Land, Credit] 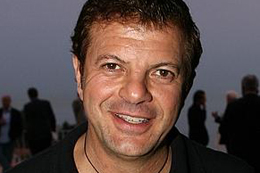 3) Rocco Ancarola, owner of Rabbit in the Moon: Formerly of Pink Elephant and recently of perplexing newcomer Rabbit in the Moon, Rocco Ancarola racked up a few bit parts in eighties and nineties movies, usually playing service industry people. He was a waiter in the infamous 21 Club scene in Wall Street, another server in the little seen early Adam Sandler comedy Overboard (which looks awesome, btw), and played a bartender in a 1997 rom-com called Loose Women. Apparently Rocco is still keeping the Hollywood flame alive — he recently filmed an indie flick with someone from Desperate Housewives, and was seen chumming around with Oliver Stone and a few other filmmakers at his restaurant earlier this summer. [Photo] 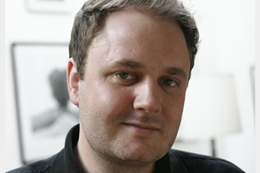 2) Chris Scott, former owner of Fat Hippo: LES Bistro Fat Hippo, home of the fondue burger, bit the dust earlier this year, but thankfully one of its owners, Chris Scott, had something to fall back on: Great Scott! Films, a production company he runs with his brother. His work behind the camera includes Stricken, a 2005 short film starring Hayley Mills of Parent Trap fame, and a series of skate and snow films, one of which debuted as a one hour special on MTV2. These flicks have high-minded production values and show cool things like a snowboarder ascending a giant wall made of ice bricks. [Photo] 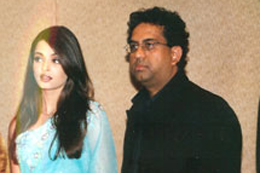 1) Shiva Natarajan, chef/owner of Chola: The restaurateur behind popular Midtown mainstay Chola, as well as several other NYC Indian restaurants, has appeared in bit parts in few big Bollywood films. Presumably his involvement with the South Asian film industry must have been developed through his restaurants, which are noted as big hangouts for Indian film actors in the promo materials. The website for his group even features a photo of the chef with megastar Aishwarya Rai, as well as other Bollywood players. Recently Natarajan had roles in big-over-there flicks Halla Bol and Khakee. [Photo: Shiva with Aishwarya Rai, credit]

Also: Kenmare owner and overall nightlife guy Paul Sevigny is following in his sister's footsteps by starring in a supporting role in the indie flick Dirty Old Town, a gritty drama set in and around the Bowery.