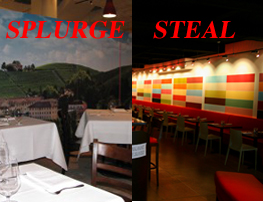 5) Manzo at Eataly/Via Emilia: One of the big draws at Eataly is Lidia Bastianich's new white table cloth restaurant, Manzo. By all accounts the restaurant is serving an inspired, fine dining take on Northern Italian fare, but for a more affordable selection of traditional pastas and hearty meat dishes, head to Via Emilia, just around the corner on 21st St. The restaurant specializes in the cuisine of Emilia-Romagna, just to the southeast of Piedmont, the inspiration behind Lidia’s restaurant, but the menu here hits all the same sweet spots. Standouts include the housemade pastas and top-notch stuffed tortelloni dishes, all served in generous portions and priced around or under $14. Although you won’t find some of the more exotic mains of Manzo here, like the fried quail, veal chop in “smoked hay” or elegant beef tastings, there are enough rustic chops and mixed grill plates on the “secondi” menu to satisfy the most serious of Italian meat cravings, all for around $20 or less. [Photo, Photo] 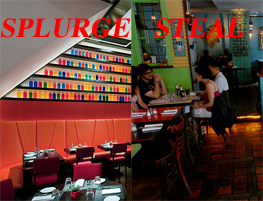 4) Nuela/Esperanto: With its chic dining room, creative cocktails and expansive menu of exotic plates, Nuela is the kind of restaurant where you want to have a few drinks and try a lot of things, which can be hard when the price of most entrees start in the $25 range, and the appetizers and ceviches are anywhere from $10-$16. A fine, affordable alternative is Esperanto, another hip Pan-Latin joint just a few neighborhoods south in Alphabet City. The predominant influence at this corner cafe is Brazilian cuisine, although the menu features many of the same trademark dishes found at Nuela, made with more traditional ingredients and preparations. Here you’ll also find a solid steak with chimichurri sauce, a grilled salmon plate and fish stew, all well under $20, and appetizers like empanadas, a hearts of palm salad and ceviches for seven dollars or less. Some have complained of inconsistency in the menu, but with so many things to try at such a great value — and a strong list of inexpensive cocktails—it’s a safe bet for a good night out. [Photo, Photo] 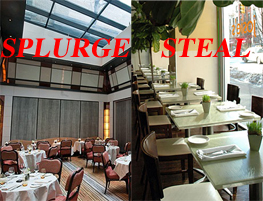 3) The Mark/Josie's: Comfort is a big priority at Jean-Georges Vongerichten’s new restaurant — the dining room is filled with colorful, cushy seats, pleasant natural light, and the menu is full of familiar dishes, prepared simply, with fresh market accompaniments. The Mark is also a very expensive restaurant, and a fine approximation of the food experience, if not the opulent dining room can be found at Josie’s, just a few 6-Train stops south in Kip’s Bay. The menu at this clean, spacious eatery also features a top-notch selection of burgers, pastas, and more formidable American entrees like filet mignon and a roasted half chicken, all under $20, with many dishes priced much lower. Like JGV, chef Louis Lanza has a gifted touch with Asian spices, which he incorporates into many of the fish preparations, and appetizers like the dumplings. Josie’s does bill itself as a “healthy food restaurant,” mostly because of its use of sustainable ingredients and preparations where flavors are not obscured by creams or unnecessary oils. But this is also true of many of the best dishes at the Mark, too. [Photo, Photo] 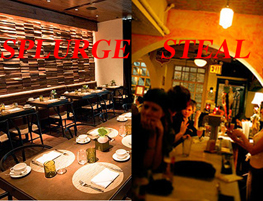 2) Print/Jimmy's No. 43: The big draw of Print, Adam Block’s stylish new Hell’s Kitchen restaurant, is its sustainable menu of Nouveau American cuisine, studded with a few sharp Italian and French influences. Many of the same strains of cooking can be found downtown at Jimmy’s No. 43, in a looser setting and at a much lower price point. Here the small kitchen cranks out an always-changing menu of stellar charcuterie plates and creative antipasti for under $10, and entrees like duck confit and shrimp and grits all for around $16 or less. Jimmy's also rocks a wide selection of craft beers that easily trumps the list at Print. [Photo, Photo] 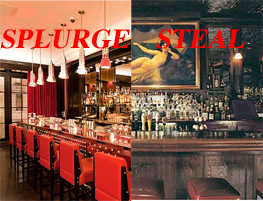 1) The Lamb's Club/The Pub at Keen's: Geoffrey Zakarian’s newest restaurant has the feel of a dining club from the Mad Men era of New York, with a menu full of premium chops and seafood dishes. Although you may not get the same service experience here, the Pub Room at Keen’s is an excellent alternative for the price. Here you can order many of the classics from the century-old dining room next door in smaller portions that are still easily substantial for one diner, most dishes are under $20. Like the Lamb’s Club, the Pub at Keen’s offers a fine roast chicken, a solid steak and a beef tartare, as well as a few equally satisfying burgers and sandwiches in the $15 range. And for those looking for a serious cut of meat along the lines of the Lamb's Club's Delmonico steak ($45) or lamb saddle ($35), the pub room offers a fine prime rib plate for $28 and a portion of their legendary mutton for $25, both still a tremendous value for the quality. [Photo, Photo]

The Mark Restaurant by Jean-Georges