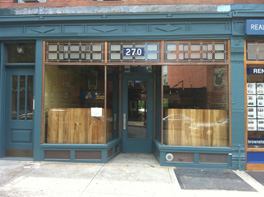 Our first shill is the most shameless of shills - an owner who doesn't really try to hide their tracks. This is the case with Strong Place in Cobble Hill where Chowhound commenter boccalupo chimes in with this:

Has anyone tried this new place on Court St. called Strong Place? Very cute place. I passed by last night. Must have just opened. Looks like they have a nice selection of beers and some interesting dishes, including a "clams, brats and beer" entree.

Up next is a shill comes from an Eater commenter who, months after the March edition of the Eater 38 was posted, drops by the comments section to leave not one but THREE identical shilltastic plugs for Pil Pil:

New Spanish wine Bar/Tapas restaurant called Pil Pil is a must try amazing wine list, food, and atmosphere. It also has the most friendly and efficient service. I believe its on 78th between 2nd and 3rd. If you're in the neighborhood stop in.

Finally, we have what could be the holy grail of shilling - several anonymous overly enthusiastic appraisals of Dinevore, a site that aggregates a restaurant's reviews and creates rankings. So many to choose from so let's start at the top, where the commenter makes a not so subtle dig at Sam Sifton:

When I need a good vegetarian restaurant, I trust that my veteran vegetarian friend of 16 years will have a more reliable list than the NYTimes Critic who has 0 years! Dinevore is not telling you where you should or should not eat -- it is giving you options to explore where you want to eat.

Then we have the casual, all lowercase cool of another anonymous commenter:

definitely a great idea, and very well executed. find some way to incorporate discounts at these restaurants and i'd live on the site. what up.

This one just seems blown away by the awesomeness:

The food world needs Dinevore! Finally there is a website that uses credible resources (the professionals people you know) to evaluate and collect restaurants. Dinevore is going to be huge!