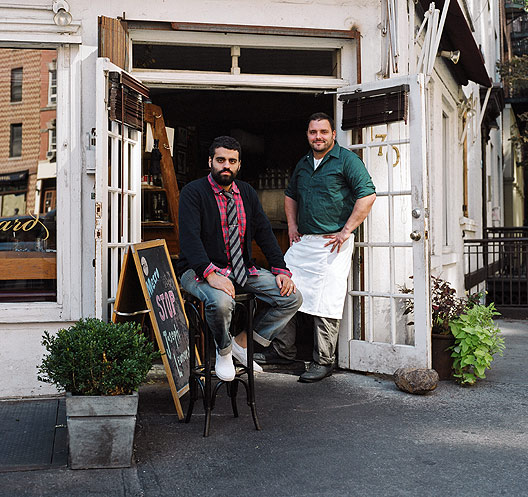 A year after opening their tiny West Village restaurant Joseph Leonard, Gabriel Stulman and Chef James McDuffee are prepping two hotly anticipated projects: the oyster bar/wine bar and grocery store Jeffrey’s and the reopening of neighborhood institution Fedora. Even as the two look towards the future, they are constantly refining their vision of a contemporary neighborhood bistro at Joseph Leonard. Both insist that the restaurant is not just their first project together, but their flagship. We recently sat down with Gabe and Jim to talk about the first year of Joseph Leonard and the road ahead.

Gabriel Stulman, Owner: I think the idea for the restaurant started coming sometime around fall 2007. The restaurants that I’ve built in the past were very much “restaurants,” with limited bars if any at all, and I wanted to build a place that was a little bit more of a hangout, an all day bistro-type deal. Chef James McDuffee: We’d met six years ago and said that at some point we’d like to work together. We’d worked together very briefly at a restaurant called Pace, which closed long ago, and kind of started developing a friendship at that time. Fast forward a few years, and we had gone our own ways, but had a lot of fun, and got the job done in the city. GS: Oh, tell the truth. We bonded over heartbreak. That’s the reality. JM: Gabe and I were riding the pine very hard for a year. GS: It was a strong six-month season. We were both moving on from past relationships and at the exact same time found a bottle of whisky together. Or several. And then that’s when Jim and I bonded, and he had this amazing dog that ended up living with me for a season or two. So we got to see a lot of Jim around while he was running the kitchen at La Esquina. JM: Then I went to Bouchon Bakery and had a lot of fun and we both got busy working and doing our things, and then a couple of years later, lo and behold, we said “Let’s do something. Let’s stop talking about it and start being about it.” GS: The famous words of Mos Def, “Don’t talk about it, be about it.”

How did you develop the concept for Joseph Leonard? JM: I think the cuisine is a reflection of how we like to eat. GS: Two of the places that have been hugely inspirational to me are Balthazar and Schiller’s, two Keith McNally joints. The thing that I love about Balthazar and Schiller’s is that they’re open all day. You can go to Balthazar to get breakfast, you can go to Balthazar for happy hour and get oysters, you can go to Balthazar and get that awesome roast chicken for two. And also the other thing that I love about both of those restaurants is that they’ve got large menus. So, you can be a regular and you can have your favorite dishes, but there’s enough variety that you can never get bored. You can always find something different. And that’s the beauty of the bistro. It’s that variety of option, and that’s something that we talked about a lot.

How did the build go? GS: I think we were probably about a month off, maybe six weeks? We got ourselves a fun little stop work order. JM: We suddenly decided we wanted some motivation. We were tired of looking at the space, and nothing was really happening so?GS: We were trigger happy. So, Jim myself and three of our friends started slamming hammers and running a jigsaw. And one of our neighbors wasn’t too happy about that and they called the DOB, and they weren’t so happy about what we’d done either. And they came in and said “You know you need a permit for this.” They put the red sticker on the window, and that set us back a few months and several thousand dollars.

How did the opening go? GS: It went awesome. Everything has its growing pains. So, when you go in expecting it, that’s not an issue. We had a great team and people were coming in and checking us out, right out of the gate. I’d say that more than anything I’ve ever done in my past, this is the place with by far the most regulars. We have people that dine with us five or six days a week. JM: I think people were curious to see what was going on. There’s a little bit of a void of restaurants around these couple of blocks. When you get to the other side of Seventh Avenue, there’s a ton of bars and restaurants, but I mean the closest restaurant to us is Morandi or the diner on the corner. I think there was a lot of excitement about that. The neighbors were super supportive every step of the way.

Were there any limitations with the space in terms of providing all-day service? GS: You have no idea. JM: Everywhere there was a limitation. We’re finding out more and more how we can grow this menu and grow the capabilities of the space within how the service can work, and how the different meals can play off of each other with the ingredients that are in house. GS: I’ve been really impressed with what Jim has been able to achieve. The limitations that we have are, I think, severe. We don’t have a freezer, anywhere. We don’t have ice cream or sorbet, we don’t have anything that needs to be frozen, it’s all fresh, fresh, fresh. We’ve got refrigerators touching each other over there. We’ve got ten burners, two ovens, a fryer and a salamander. That’s what most people have as a prep kitchen. It’s really impressive when I look at how we’ve got five seafood entrees, five meat entrees, thirteen appetizers, all done with these varying, beautiful techniques and preparations. I tip my hat to everything that Jim and the team in the kitchen have been able to pull off. JM: Well, we’ve been fortunate in that we’ve been consistently busy. We haven’t had to live for Friday or Saturday nights, so we know within a certain boundary what we’re going to do on a given night.

What was the review process like? GS: Critiques were coming in right away, and the most frustrating thing is when someone takes a shot at something that we, ourselves are questioning. For instance, and I don’t remember who this was, but somebody said something about a dish that was only on our menu for the first two weeks. We weren’t crazy about how it was being executed, so we took it out. By the time the review came out, it had been off the menu for two weeks already. It was like, “Oh man dude, you’re taking a shot at that dish? That means you ate here in the first two weeks, and you haven’t been back since to recognize that we felt the same thing.” You write your first menu based on what you know you can cook, but you have no idea how many people are running through that door. And you say, "Okay that dish takes too long to pick up, that dish takes too many pans. That wine is not getting served at the right temperature, that cocktail takes too long." We’re going to go through that process at Jeffrey’s, we’re going to go through that process at Fedora, we’re going to go through that process every time we open anything. You can bitch and complain about how writers do that, because it’s going to do no good. Rather, I say, it’s our responsibility to recognize that that’s what life is. So, we have to challenge ourselves to get with it quickly. Take the praise humbly and take the trash talking in stride.

Gabe, what were the challenges of catering to a steady steam of regulars, and also people checking the place out for the first time? GS: I think I really have to pass most of the credit to the front of the house staff here. We’ve got an amazing general manager, bartenders, waiters and maitre’ds. And they’re really, really good at recognizing our neighbors and our regulars. And when they see our regulars, the answer is, “You know what, it’s really busy, but just come on in, sit next to the ladder, go next to the suitcase, let me get you a drink, this round’s on us. We’re going to find you a seat, we’ll find you a seat if it takes a half hour, if it takes an hour, and we’re going to send you out some rillettes. Just hang out and have a good time. How’s your family? How’s the dog? How’s work?” And when the new people come in, we have a very, very rounded approach. It’s not a mantra, it’s an ideology. We talk about it in our daily meetings, we say, “Whenever you see a face that you don’t recognize, that is an opportunity to make a new regular.” So every day we talk about keeping an eye out for the unknown face. Look for that face that you’ve never seen, reach out and extend a further arm and a warmer embrace to that person.

As you expand, what are your priorities with this restaurant? JM: I hope that in a year people can say that it’s better than what it is today. GS: I think the important thing as we expand is, number one, to continue to raise the bar for ourselves here, to continue to stay grounded here, to never forget or lose site of the fact that this is our flagship, this is our lighthouse, and to keep this team in tact. We’ve being very, very careful to not take the team that has made Joseph Leonard special, in our opinion, and not branch them out all over the place. That to me then leaves this place weak. And what we’re doing is the opposite. We’re building strong teams, and we’re taking one person, perhaps, and sending them over there to Fedora to build their team. We're making sure that when a regular walks in here that they’re still seeing the same bartenders and waiters, that they’re still seeing Jim in the kitchen, and John on the floor. It’s still Joseph Leonard. And fortunately for us, the staff that works here wants to stay here.

Does it seem like it’s been a year? JM: In some ways it seems like it's been three or four years, and other days, it’s like like it was just yesterday that we were throwing a sledgehammer at this wall. GS: To me, it doesn’t seem like it’s been a year at all. A large part of it has to do with how many amazing things have happened with my relationship with my wife Gina. She was with me when I signed this lease, and bringing Jim and I food, and helping us paint, and helping us during construction. After we opened, we made the decision to work together, we got engaged here. We had our rehearsal dinner here like two weeks ago. All that happened in the last year, and we signed two leases, and we’ve been in construction. It doesn’t seem like a year, it seems like flash lighting. I completely live and breathe this, so it doesn’t even feel like work.