Highlights From the Personal Blogs of NYC Chefs

Share All sharing options for: Highlights From the Personal Blogs of NYC Chefs

A lot of New York chefs are on Twitter these days, but a few actually keep straight up, old fashioned, blogs. Naturally, many of these have to do with food, but often times, they provide an interesting glimpse into their lives outside the kitchen, too. Here's breakdown of some recent posts of note from the blogs of five big NYC chefs: 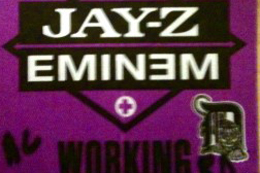 ANDREW CARMELLINI — Yesterday, the Locanda Verde chef revealed the name for his new SoHo restaurant, The Dutch, via a photo on his blog, but the Carms has been uploading content to his site at least once a day for a while now. Last week, he showed us the original 19th century blueprints for his new restaurant space, some sauce-splattered recipe pages of dishes he’s working on, a video for a weird, food-related South Korean dance-pop song and a pic of his ticket stub from the Jay-Z/Eminem show at Yankee’s Stadium. [AndrewCarmellini.com] 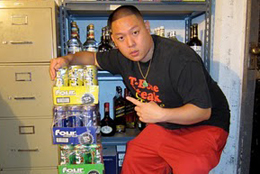 EDDIE HUANG— Opening up his second restaurant Xiao Ye has not slowed down chef/owner Eddie Huang where blogging is concerned. His recent response to the Sam Sifton Diner’s Journal post about the trend towards “emotionally distant dining” is the must read entry here. Eddie argues that while the upper crust, more austere restaurants have a place in the dining fabric of the city, the eateries he loves all have an element of theater, noting "I fux with Sammy's Romanian for Passover because there's line dancing, cougars and vodka in ice blocks." Eddie also offered his picks for NFL Week 1, a thoroughly readable list of his ten favorite MCs, and a smattering of music videos, including the absurd new track from Lil B, “Eat that Wonton Soup.” [Fresh Off the Boat] 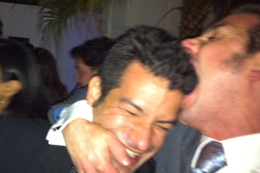 JOHNNY IUZINNI —The “news" section of the Jean Georges pastry chef and Top Chef: Desserts judge's site acts as his unofficial blog, and now that he’s back from his Spanish holiday, it has been a flurry of activity. Recent posts include pics and thoughts on this week's Star Chefs conference, a travelogue of a trip to Seattle a few weeks ago, photos from a book signing with Marcus Samuelsson and Elizabeth Falkner of SF's Citizen Cake, and best of all, this photo of Johnny trying to eat Aldea chef George Mendes’ head. [JohnnyIuzzini.com/news] 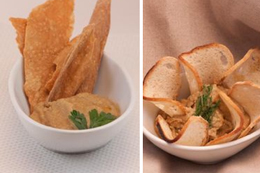 DANIEL ANGERER —The Klee Brasserie chef is busy prepping two new restaurant concepts for the Fall, but he’s still been posting recipes to his blog, all of which are peppered with bits of his own personal culinary history. Last week’s post was a tutorial on vegetable vinaigrettes, with tips on how to blanch greenmarket leeks. The week before, the chef wrote about his favorite easy dips for late night snacking and reminisced about how a simple plate of bar nachos helped shape his admiration for "feel good foods" many years ago. [Danielangerer.com] 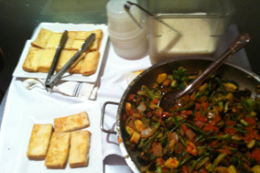 AMANDA COHEN— The Dirt Candy chef/owner has been continuing her project of photoblogging the restaurant's family meals, and offered her thoughts this week on the weird rash of "family meal cookbooks." Amanda also filed a post about why she’s never going to take a vacation or a stay-cation ever again because equipment at the restaurant breaks when she leaves, and another on how all the changes made as a part of Eleven Madison Park's redesign bear a striking similarity to what’s been going on at her restaurant since day one. [Dirtcandy.com]