The Who, What, When of Fall Openings, Wine List Edition

Welcome to Eater's column, Decanted, in which WineChap's Talia Baiocchi guides us through the treacherous world of New York wine lists..

As we barrel toward the end of September and brace for the official openings of Jonathan Benno's The Lincoln and Chris Cannon and Michael White's Osteria Morini (OMG!), it's high time we take a look at the new beverage programs to watch this season. Here's your official who, what, and when of fall openings, wine list edition. 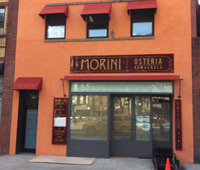 Who: Chris Cannon
What: Italian, with a focus on the wines of Emilia Romagna and Le Marche. Special homage to Lambrusco.
When: Like, now.
Chris Cannon gets back in the game with his and Chef Michael White's first downscale restaurant, and Cannon is taking the wine program into his hands. The list will go casual, focusing on Emilia Romagna, the region from which White's cuisine at Morini is inspired. Lambrusco will receive perhaps more attention than it's ever seen on a list in NYC (outside of Via Emilia, perhaps), with 15 offerings ranging in style from sweet to dry and aromatic to a few uncharacteristically serious Lambruschi with bottle age; all three distinct styles will be available by the glass or as a flight of 3 for $19. Two wines hailing from Imola (the town home to San Domenico, the restaurant where White spent seven years, and for whose owner—Gianluigi Morini—the present restaurant is named) will be available on tap by the glass, quartino, and liter. The rest of the list will lean on Sangiovese from central Italy, Verdicchio from Le Marche, and whites and reds from Liguria; each selection receives a proprietary note penned by Cannon. The list dabbles in the trippy too, with a section entitled "Vini Bianchi da Contemplazione" (white wines of contemplation) that will include offbeat gems from Walter de Batte, La Stoppa, Massavecchia, and more. Eben Freeman, Tailor's former master mixologist, is on board to handle the hard booze.

Ciano
Who: John Slover
What: Riff on his groundbreaking Bar Henry list—famous for offering a large portion of the list's full bottles by the half—with a stronger reliance on Italian wines.
When: First or second week of October

John Slover, formerly of Cru and consulting Wine Director at Bar Henry, rejoins Chef Shea Gallante (also formerly of Cru) to open Ciano in the former Beppe space. The list will follow roughly the same formula as the Bar Henry list, offering nearly half of the wines by the bottle by the half, and ultimately, by the glass. Slover will remain adamant in his inclusion of wines that are ready to drink, showcasing many bottlings with 5-10 years of wisdom; mark-ups will remain charitable. Ciano will differ from Bar Henry in that it will have a stronger focus on Italian wines, and a few special additions that will highlight a specific zone, not to mention a food menu that is far more likely to live up to the wine selections.

Lincoln
Who: Aaron Von Rock
What: 300 selections. Italy, as in several small producers with a focus on Piedmont and Friuli; Champagne; unique twists on classic cocktails; Negroni bar
When: September 24th

The wine list at the most talked about opening of the season from former Per Se Executive chef Jonathan Benno will be helmed by industry veteran Aaron Von Rock (formerly of Telepan) and will open its doors with a list of just over 300 wines (they hope to settle around 400 by the end of the year). Von Rock calls the list a "regional journey" through Italy that features small, boutique producers that he and the staff consider to be part of their "extended family." Despite the fact that the Lincoln aspires to fine dining, half of the list's offerings fall under $70. And for those who don't care to troll the list traditionally, Von Rock has punctuated its regional organization with five "one page solutions," which organize the wines by their flavor profile—blue fruit, earthy, aromatic, etc. For those seeking serious booze, a dedicated Negroni bar and an extensive cocktail list that will play on the classics is also slated.

"The Cub Room" (Andrew Carmellini's yet to be named restaurant)
Who: Josh Nadel
What: Almost exclusively domestic list which will include Nadel and Freeman's/Peels owner William Tigertt's private label wines from Oregon and Sonoma.
When: November

Josh Nadel, former Cru alum and current Wine Director at Locanda Verde, will show off his knowledge of domestic wines with a list that leans almost entirely on the 50 states. Expect a well-edited selection of wines from Oregon, Washington, New York, Virginia, and of course, California, along with a smattering of wines from across the pond.

Ai Fiori
Who: Hristo Zisovski
What: Roughly 500 selections. French and Italian with a focus on Northern Italy and Southern France.
When: November

Former Chef Sommelier at Jean Georges, Hristo Zisovski, joins the Altamarea group to open Chef Michael White and Chris Cannon's Ai Fiori in the Setai Hotel. The list will top out at around 500 selections—125 of which will fall under $100—and will focus on the wines of Piedmont, Liguria, the Southern Rhone, Languedoc, and Provence. The cocktail program will also be helmed by Eben Freeman, formerly of Tailor and currently of White and Cannon's Osteria Morini.

Chef Sara Jenkins (of Porchetta, and formerly of Il Buco) has enlisted Zach Shapiro (former Wine Director at Lupa) to assemble a short list of what Jenkins calls "picnic table wines" or wines that she drinks at her family's house in Italy. The focus will be on wines made from indigenous varieties, priced between $30-$60.

Red Rooster
Who: Marcus Samuelsson
What: A strong selection of bourbon, bourbon-based cocktails, domestic beers, and a short list of affordable wines that will focus on New York State and South Africa.
When: Second week of October

In an homage to the original Red Rooster (a neighborhood speakeasy during Prohibition), the beverage program will lean on bourbon and domestic beers, including Harlem's own Sugar Hill Brewery and several others from New York State. The wine list will be kept at a skinny 40-50 selections (two of which will be offered on tap) and will focus on domestics and—in honor of Chef Marcus Samuelsson's heritage—South African wines.