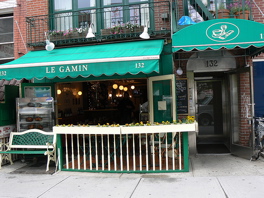 Part two of this month's Community Board 2 meeting went down last night, attracting heavy hitters from all around the Village and its surrounds. Keith McNally headlined, but there were also cameos from the Grimaldi's founders, Miss Lily's, Pravda, and Cafe Select. Let's get into it:

1) Yes, McNally stole the show, but sitting quietly at the front of the room for over three hours was the team for the last item of the night: the Grimaldis. As their partner Matt Grogan explained, the couple hopes to come out of retirement to open up a 62-seat place on 352 Bowery; no bells and whistles, just Grimaldi pizza in Manhattan. This is the Juliania's Pizzeria reported almost a year ago.

By the looks of things, the team is going to have to do some regrouping. The board issued a unanimous denial on the beer/wine proposal based on the problems one would expect from this operation: noise, venting, the use of a coal oven, and the experience of the other principals (it was assumed the Grimaldi's wouldn't be in there full-time). Most surprising of all was the fact that Grogan and Co. had no answer for how they'd deal with lines.

The board was respectful of the team, giving the couple a round of applause when they were introduced, and emphasized how it's not about the operator but about the space. They encouraged the applicants to work with those who ended up opposing the proposal -- a list that includes community activist Zella Jones -- to find an already licensed space.

2) The board was happy to unanimously greenlight the folks from Jackson Diner for a new location at 72 University Place. They just need to reach out to the block association and wait three years before applying for a sidewalk café.

3) It looks like Pravda on 281 Lafayette will now become St. James. An owner went before the board for a transfer and was approved almost on the spot. There will be no physical changes to the locale.

4) The team from Miss Lily's at 132 Houston was finally approved for their application -- the one that Anna Wintour opposed earlier in the summer. The applicants explained that they've scaled back their ambitions considerably, opting to apply for a beer/wine license and giving up using the second floor of the location. Although seven folks came in to speak against the Jamaican restaurant and its affiliations to Serge Becker, it made it through. The chef will be Bradford Thompson, who made his name at Mary Elaine's at the Phoenician in Scottsdale.

5) 344 Bowery d/b/a Sala was denied based on the fact that the new principal did not substantiate his claims that all past problems with the location have been resolved. If he successfully demonstrates this to the community next month, the board determined, "it's a no-brainer."

6) Café Select was approved for their plans to alter the space and move ten seats for dining to their back room. Said one board member during the executive session, "It looks like it's the space they've been using already. They just want to license it."
· All Community Board Coverage [~ENY~]