Fall Fashion Week is coming to an end, and while the clothes are more important to most, it was also a very important week for several new nightlife venues that timed their opening and re-launch to coincide with the all important event. But there is only so much room at the top of the heap, so while some go up, others unfortunately went down. 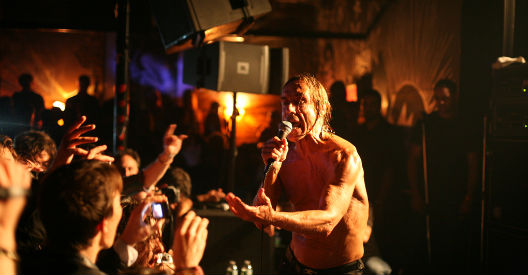 [Courtesy of A Medium Format, Iggy Pop at Don Hills]

WINNERS
· Don Hills - Paul Sevigny and Nur Khan's formal re-launch of the rock and dance club went off without a hitch for the most part, hosting raucous events headlined by Iggy Pop, Hole, Crystal Castles and the Yeah Yeah Yeahs. The reaction was overwhelmingly positive, leaving some nightlife experts speechless. But remember that this week was a bit of anomaly full of major headliners paid for by magazines and tequila companies, so most nights won't be this wild. But since the club became the late night place to go over the weekend, this re-opening was a total success.

· The Boom Boom Room/Le Bain - The Standard Hotel's penthouse pleasure palaces were built for weeks like this and they both delivered. After a summer slumber, the Boom came back with a vengeance, including a surprise performance by Kanye West to kick things off. Le Bain finished out its opening summer with a Purple Magazine after party that went until 6 AM. After Fashion Week, The Boom will remain open after Fashion Week and become a members only club yet, but Le Bain's roof deck will be winding down as Andre's Le Baron gets ready to open.

· Lavo - The Italian restaurant and nightclub import from Vegas opened its doors to guests for the first time over the weekend, hosting a Zac Posen party in the upstairs restaurant before its grand opening last night. Lavo enjoys the luxury of having no real competition near the tents' new location in Lincoln Center and the celebrity connection of its owners, but now that Fashion Week is over will anyone really want to go to E. 58th Street for Italian food? And will Euros and lazy Uptowners really sustain its nightclub business?

LOSERS
· The Darby - After hosting a preview dinner for Beyonce's birthday, Richie Akiva and Scott Sartiano's new supper club went silent for the rest of the week. What happened? How could they not be ready? It's hard to knock a venue that hasn't even opened for business yet, but one would think that if you are ready enough for Beyonce, you should be able to book a few events during the biggest week of the fall.

· SL - The tiny lounge below Abe and Arthur's had a massive opening during last year's Fashion Week but was seldom heard from during the past week's festivities. It's not that the lounge isn't successful and hopefully the issues at sister club Tenjune aren't dragging SL down with it.

· Rose Bar - With Kenmare and Don Hill's riding a wave of popularity, Nur Khan's baby in the Gramercy Park Hotel has become the forgotten child in his ever expanding empire. An insider recently told us that the lounge has settled into its role as an upscale hotel bar and is no longer worried about competing for nightlife supremacy. Is it losing or just accepting its fate? Probably a little bit of both, but here's remembering some of the great events of yesteryear held there.
· Nightlife Coverage [~ENY~]