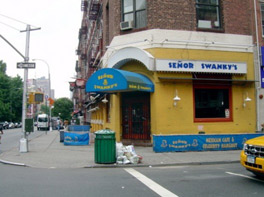 Yesterday evening Community Board 2 convened for the first of this month's two SLA licensing meetings (the second will be held this Thursday, September 16). A number of drops from the docket shortened the affair, but there was still plenty to get excited over throughout the course of the three hour meeting.

1) With all the withdrawals and a relatively small crowd, it seemed this might prove a rather tame CB, but The Smile and Jane alums Matt Kliegman and Carlos Quirarte proved us wrong... real fast. The tandem had been before the board in August for the space at 75 Clarkson St. that they want to turn into an adult entertainment restaurant/cabaret, and since that time has made efforts to woo the community by gradually agreeing to 17 stipulations. Among them: soundproofing, a plan to deal with traffic, additional bathrooms, 1 licensed unarmed security guard per 60 customers (it's usually per 75), no bottle service, no promoters, and no sidewalk use. They even agreed to developing an intern program for their planned rooftop vegetable garden, which will source The Smile. Asked how he'll explain to kids why there are two stripper poles in the locale, Kliegman said he'd "speak candidly about the operation."

The community and the board remained hesitant about the 299 capacity space. There was lingering concern over traffic -- it's a class D intersection, planned topless and gay nights ("will you have towel dancing?" asked a certain board member), and drug use, as well as allusions to the problems posed by The Jane at one point.

The board encouraged Kliegman and Quirarte to layover the application for one month in order to allow for further dialogue, but the team insisted that they can't afford to hold off any longer. It was unclear at the end of the meeting if the board ended up voting on the matter.

2) What used to be Señor Swanky's at 142 Bleecker will now become a gastropub aimed at a more "mature" audience. As would be expected, there is plenty of opposition to having a license on the shitshow that is Bleecker, even though the board noted that most operations on the block are responsible; the drunk folk are another matter. The owners agreed to closing at 2 AM seven days a week -- they were shooting for 4 AM -- and to shut their French doors at 11 nightly.

3) The folks at 508 Restaurant & Bar were approved to alter their license to allow for brewing beer in the establishment's downstairs space.

4) A female duo was in to apply for what will be a 45-seat "new European" restaurant on 81 7th Avenue. Considering that plans for the space include ripping out most of the bar space, the board was relatively open to greenlighting the team, which includes a first-time restaurant manager with experience in London.
· All Community Board Coverage [~ENY~]