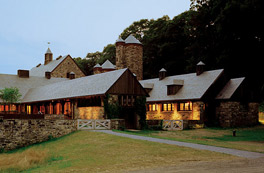 BLUE HILL AT STONE BARNS
There are restaurants, and then there’s Stone Barns. For many New Yorkers, Chef Dan Barber’s elevated homage to farm to table remains in a category all its own. First, it’s in Westchester, actually on a farm. It requires a car and a designated driver, or else the patience to train and/or taxi both there and back. Second, the reservation desk does an excellent impression of the Iron Curtain: getting through—let alone getting a reservation—requires a strategy. And third, its approach to fine dining is wholly unique. There is no menu—just a list of ingredients—and most (if not all) of those ingredients are sourced from either just down the hill or from neighboring purveyors in the Hudson Valley. Vegetables play a prominent role; a whole course or more might be dedicated to a root or a particular type of onion, creating skillful lapses in carnivory wherein vegetarianism becomes momentarily attractive. The service is both congenial and educational to boot. In short, the simplicity of the concept is deceitful; and the genius of Chef Dan Barber resists its complication.

Blue Hill at Stone Barns’ Wine Director Thomas Carter—a trained chef who’s cooked at Mercer Kitchen and the now defunct Alain Ducasse—takes an educated and understanding approach to complementing Chef Barber’s cuisine. Carter’s palate is unabashedly classic, and the list’s 1,000+ selections depend largely on Burgundy and the Rhone. Germany, Austria, and Alsace also play prominent roles, and domestics are dominated by California Cabernet, a category which Carter rescues from aridity by leaning on producers who are either of the old school or the restrained new. The by-the-glass list is always interesting, well priced, and quite lengthy. The main strength here, however, is the editing. There are very few wines that seem to have crept in uninvited, and the list’s size and depth are impressive without being overwhelming. Even Goldilocks would approve. The only gripe with this list is that it can be a bit erratic when it comes to pricing, sometimes veering a bit too far above double the average retail price. There are still wines from great producers in “off” vintages and a dozen or so wines that are priced below standard. All in all, Carter’s list is one that doesn’t receive nearly enough attention. It’s the perfect example of how to create a list of wines that is symbiotic with the cuisine and the philosophy of the restaurant. In other words, it’s “just right.”

Bang For Your Buck
Montlouis Sec 'Clos du Breuil' 2005, François Chidaine $60
Though just across the river from Vouvray, Montlouis remains relatively off the grid. Francois Chidaine is easily one of the appellation’s finest producers, pumping out honest, biodynamic Chenin that generally drinks above its price point.

Riesling 'Klaus' Weissenkirchen Smaragd 2001, Prager $95
Sourced from this famed Austrian producer’s highest vineyard site, this baby is all classic Wachau tension. Concentrated and intense, with the acidity to back it up. Excellent vintage for this region and will show well with a dip in the decanter.

Barbera 'Vigna Dei Dardi' 2004, A & G Fantino $45
One of the great, classic Barbera bottlings on the market from one of La Morra’s unsung heroes. Delicate, earthy stuff that is—dollar for dollar—one of the best values around. Effortless, but complex enough for contemplation.

Côtes du Roussillon 'Vieilles Vignes' 2004, Domaine Gauby $70
One of the great estates from the Languedoc making beefy wines and employing traditional techniques. More understated than some of the utterly colossal wines from this area, this blend of Cabernet, Syrah, and Grenache keeps its heat in check.

Off The Beaten Path
Chardonnay 'Cuvee W' 1994, Kalin Cellars $90
Winery of dollhouse proportions making traditional wines (minimal manipulation, no filtration, etc.) in this terroir north of San Francisco. Made in quantities undetectable to the human eye and aged sur lie (like all of their whites) for 11 months, this wine is released only after sufficient time in bottle. One of the great under-the-radar CA producers.

Crowd Pleaser
Bianco Secco 'Ca'del Merlo' 2007, Giuseppe Quintarelli $64
One of Italy’s greatest artisan winemakers and the undisputed king of the Veneto. Although famous for his red, he’s not dropping any balls with the bianco. This is his blend of 5 or more varieties that act as Quintarelli’s oddball answer to Soave.

SP68’ 2008, Occhipinti $46
Arianna Occhipinti is only in her mid-twenties, but she’s already managed to achieve legendary status with wines that manage the warm southern sun with uncommon grace. This typical Vittoria blend of Nero d’Avola and Frappato is the product of extreme care in the vineyard and traditional/non-interventionist techniques in the cellar.

Break The Bank
Brut 'InFlorescence' NV, Cedric Bouchard $135
Gorgeous handmade bubbly from one of Champagne’s rising stars. Unfined, unfiltered, and no dosage. Part of Champagne’s new wave of terroir-driven, vineyard specific wines. Easily one of the finest NV Champagnes for the coin.

Meursault 'Perrieres' 1er Cru 2004, Domaine Darviot-Perrin $180
Relatively under-the-radar producer. Excellent, intensely mineral-driven wine from this famed 1er Cru site in Meursault. An excellent example of how precise many of the white Burgs from this vintage can be.

Corton Grand Cru 'Cuvée Charlotte Dumay' Meo-Camuzet2001, Hospices de Beaune $175
The Hospices de Beaune is a charitable organization that has over 50 hectares of prime holdings in the Côte de Beaune. Of these, 41 different cuvées (each a blend of different sites within a commune) are sold each year at auction and picked up by local producers who then become responsible for the élevage and bottling. Here, a blend of 3 grand cru sites in Corton, raised by the inimitable Meo Camuzet.

Barolo Adasi1996, Famiglia Anselma $180
A fantastic value from the newly crowned prince of Barolo. For a guy in his 20s, Maurizio Anselma has managed to produce wines with serious poise. From the classic ’96 vintage, the Adasi Riserva is perhaps the best wine this producer has put out to date.

WTF?
Shiraz 'Mount Edelstone' 2001, Henschke $575
Okay. I’ll admit a general bias against Australian wine, but this isn’t about the wine being here, but rather about how much it costs. The wine is priced as if it were Henschke’s culty Hill of Grace bottling. Although not exactly on the shelves of every corner store, this wine retails for under $100, and even vintages dating back to the early 90s don’t fetch more than $200.

BLUE HILL NYC
The city’s very own outpost of the expansive, idyllic Stone Barns—Blue Hill NYC—boasts a smaller and slightly edgier wine list (i.e. fittingly urban). It’s about 1/10th the size, with a larger fraction of the wines falling under $75. The list finds itself further into the periphery with wines from producers like Agnès and René Mosse and Andrea Calek. But that celebrated tendency to wander into obscurity is not quite as welcome when applied to the pricing; the wines often get lost far above standard (see: WTF?). Still, wine director Claire Paparazzo—who was part of the opening team at Stone Barns—keeps the selection intriguing with a well-chosen mix of small, thoughtful producers from both the Old and New World, with a handful of back vintage wines for good measure.


Bang For Your Buck
‘La Lettre à Élise’ 2008, Agnès et René Mosse $56
Agnès and René are two leading nautral wine producers out of the Loire, and this particular bottling is 100% Chenin Blanc from their homebase in Anjou. Brisk, dry, and classic Chenie.

Viré-Clessé ‘Cuvee Tradition’ 2004, Domaine de la Bongran $88
Not your typical crispy, sluggable Mâcon. Theventet picks late, and as a result, the wines are rich, sometimes with a touch of botrytis. This particular cuvee is not affected, but it still boasts that late-picking richness. Drinking excellent at 6-years-old.

Saint-Pourçain 2007, Famille Laurent $52
This is a blend of Gamay and Pinot hailing from Saint-Pourçain, a small appellation in the Loire Valley. Excellent, aromatic little wine that will prove super versatile with the food.

Ribeira Sacra ‘Lalama’ 2006, Bodega Dominio $78
Hailing from the Quiroga-Bibei sub zone of the Ribeira Sacra D.O., Dominio do Bibei is making some of the most ambitious wines in the region. Simplicity rules here: there are no stainless tanks for fermentation, only cement and wood barrels. This particular wine is a brawny blend of primarily Mencía with a touch of Garnacha, Brancellao, and Mouraton.

Off The Beaten Path
Selim Brut NV, Viticoltori De Conciliis $50
The first ever sparkling wine made in Campania is currently making its rounds on local lists. This great value—a blend of 30% Aglianico (the varietal responsible for the broody reds that the region is famous for) and 70% Fiano grown in volcanic soil—is all heart.

Crowd Pleaser
Gamay Noir ‘Porphyry Barsotti Ranch’ 2008, Edmunds St. John $50
Edmunds St. John is what we wish CA had more of. Steve Edmunds is a lover of the Old World in a sea of modernist pirates. His wines have serious character and are reliably likeable. Excellent little CA riff on Beaujolais’s Gamay.


Break The Bank
Brut Blanc de Blancs 2003, Pierre Peters $160
Everyone’s favorite grower Champagne. Pierre Peters has gained quite a reputation for the focused and minerally take-your-breath-away bubbly that is built to satiate even the fussiest of drinkers. Despite the tough vintage, this maintains its precision.

Saint Joseph ‘Les Serines’ 2004, Cuilleron $119
Meaty, rustic Syrah from one of the great traditionalists. Not for the meek of heart. Brambly, bodacious, and begging for a short stint in the decanter.

WTF?
Savennières ‘Clos de Bergerie’ 2007, Nicolas Joly $185
Calculator fail. Great wine from one of the true stewards of the Chenin Blanc grape, but this wine retails for $52.97 at Astor. Oops.