Tracking the Menu Design Trends of 2010

Share All sharing options for: Tracking the Menu Design Trends of 2010

If you look at the menus of all the New York restaurants that have opened this year, a few design trends start to become clear. Some of these are as simple as artwork that adorns the top of the page, others have to do with how the menu its self is created by the chef and laid out for the diner. Here’s a look at eight of the big ones: 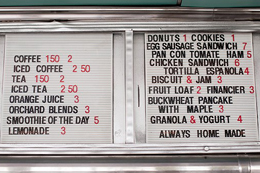 8) Retro Letter Boards: A lot of casual counter service-style restaurants opt for chalkboard menus or printed boards above the kitchen or cash register. But in the past few months these movie theatre concession stand-style menus have popped up at cool-kid newcomers Pies 'n' Thighs, The Commodore, and M. Wells, either as the sole menu, or as decoration. It’s as much of an aesthetic choice as a practical one, and instantly communicates an old-school charm. [Photo] 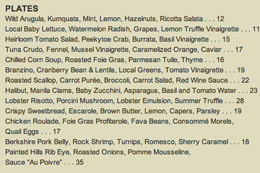 7) Plates, Not Courses: For whatever reason, a lot of the big new restaurants this year have eschewed the idea of breaking down their menu items into traditional courses, instead offering “plates.” Sometimes they are "big" or "small" plates, but places like Recette, Annisa, 5 and Diamond and Traif all offer menus where most of the items — apart from things like snacks or charcuterie — are within the same general price range and presumably meant for sharing. It’s a contemporary design, one that suggests that the food speaks for its self, and that the diner shouldn’t care about how substantial the portion may be. [Photo] 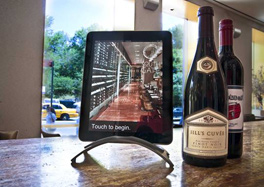 6) Multimedia Menus: Within weeks of the iPad's release, South Gate and Barbacco began using them to display their extended wine lists. 4Food, the bonkers techy restaurant not only incorporates iPads into their ordering system, but also uses a giant flatscreen to display their menu. It’s too early to tell if these multimedia menus will become more popular, or if it's just a matter of playing around with new gadgetry, but we'll no doubt see a few more attempts to make it work before the year’s out. 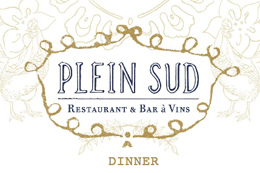 5) Crests + Patterns: Not a new menu design detail, but a popular one this year. Restaurants like Plein Sud, Thistle Hill Tavern and Diablo Royale Este, drop a logo atop the menu resembling a Medieval crest, backed by a monochromatic scrolling design — often times these are outlines of vegetables or other ingredients. It’s a regal header, one that also signifies old-timyness, and a certain rustic quality to the food down below. [Photo] 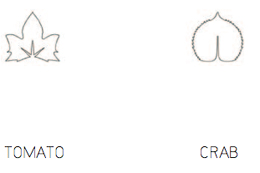 4) Minimalist Menu Descriptions: Perhaps as a result of the ingredient fetishism of the last few years, more and more chefs are paring down the information about technique and preparation on their menus. While few go to the monastic "ingredient list" extremes of Ma Peche, Colicchio & Sons or EMP (all from chefs who are famous for technique), a lot of new places will only indicate the preparation of the protein, or leave all the preparations totally vague. Take for example any of the main dishes at The Lion ("Amish Chicken with Spring Onions, Ramps, Morel Mushrooms, Poultry Jus”") Torrisi ("Striped Bass, Pickled Green Tomatoes, Our Olives") or Anissa ("Crispy Sweetbread, Escarole, Brown Butter, Lemon, Capers, Parsley"). [Photo] 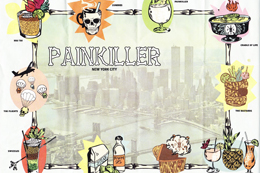 3) The Kitschy Cocktail Placemat: One of the most distinctive design details of the two big surf/seaside themed spots of the year, Painkiller and the Commodore, are the paper cocktail menu placemats adorned with retro drawings of the drinks available. Apart from being a cool way for the customer to engage with the menu (and get them to ask questions about the drinks of the bartender or waitress), it’s the perfect thing to fold up and put in your purse or pocket as a memento of the night that you had there. [Photo] 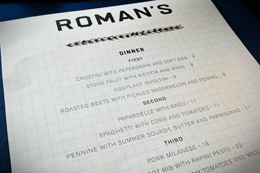 2) One-Use-Only Paper Menus: Not a new trend, but a growing one. Small, single sheet menus that are presented outside of vinyl-bordered menu holders are becoming de rigueur at New York’s more humble, cuisine-focused restaurants. It’s a necessity for places like Northern Spy Food Co. and Roman's whose menu changes daily, or weekly. But this style also eliminates the cost of printing fancy new design-heavy menus every time there's a change, as well as the time it takes to pull and stuff menu holders. [Photo] 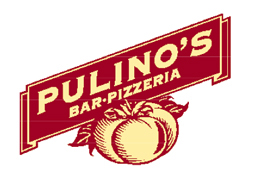 1) Drawings of Vegetables and Animals: A clean sketch of a vegetable or animal is a subtle way to communicate an ingredient focus or seasonality, and a lot of big restaurants in the past year have incorporated such drawings either as logos or at the top or on the side of the menus. Such artwork can be found on the menus of Pulino’s (a tomato), ABC Kitchen (some kind of herb or root), The Smile (a woman riding an elegant chicken), and of course Eataly’s Il Manzo (a cow). [Photo]

Also: The trend of having a "snacks" section on the menu — which came into popularity somewhere around early 2009 — is still going strong today. At the new restaurants of 2010, the names of these smaller-than-appetizer foods vary from menu to menu: Choptank offers "nibbles", Salon Millesime has "Table Snacks," and Todd English's Ca Va serves “Les Petit Plats."