Welcome to Eater's column, Decanted, in which WineChap's Talia Baiocchi guides us through the treacherous world of New York wine lists.. 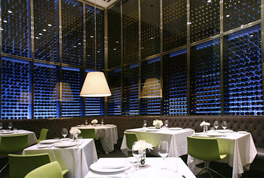 Most Likely To Succeed: Alto
Levi Dalton, one of the city’s most talented sommeliers (formerly of Café Boulud, Masa, and Convivio), recently left his post as Wine Director of Convivio’s all Southern Italian list to take on the eclectic, far burlier collection at Alto. Alto’s former list—though impressive in its depth—went a little too far out of its way to offer everything to everyone (i.e. do you really need 18 vintages of Heitz Martha’s Vineyard at a restaurant that doesn’t have steak in the name?) and ended up fumbling all over itself as a result. However, in the short time that Dalton has been at the helm, the list has already been trimmed of the useless Bordeaux and California weight in favor of wines that are more suited to the cuisine. Look for a renewed focus on Northern Italy, an increase in quirky, off-the-beaten track wines from both in and outside of Italy, and a happy absence of Screaming Eagle.
What to drink: Plenty of value to be plucked from the whites of Germany and Austria, as well as from Italy’s more remote regions (see: Alto Adige, Valle d’Aosta, and Liguria). For those looking to throw bills in the air, the abyssal collection of Barolo and Barbaresco awaits.

Most Reliable: Bar Boulud
Bar Boulud’s tidy and ever-inspired list of mostly French wines comes courtesy of another of the city’s great sommeliers: Michael Madrigale. The Cote d’Or and the Northern Rhone are the main attractions, but Cru Beaujolais—clearly a love of Madrigale’s—is always granted ample real estate. The same is true for the more far flung wines of the Southern Rhone. Overall, the list is well priced despite the location and the well-moneyed antediluvian crowd that frequents it. The wines by the glass rotate regularly, and every night Madrigale is armed with a large format of something dusty and delicious that is priced at wholesale and almost always merits a visit.
What to drink: For value, hang around the “Les Decouvertes” sections of both Rhone and Burgundy, where you’ll find plenty of wines under $75, many of which lie along the road less traveled.

Most Improved: Dovetail
As mentioned a few weeks ago, Amanda Reade Sturgeon has elbowed the UWS into submission with a well-edited remodel of the former snooze-fest that came before her. Keep an eye on the list of sherries, as they are sure to expand, as will the selection of more affordable wines from Burgundy.
What to drink: Southern France and Italy have a strong presence and offer great traditional wines in a variety of price points.

Best Sense of Humor: Terroir
Yes, it might look like the contents of a strung-out high schooler’s Trapper Keeper, but no one can deny that it’s amusing. Artist-madman Steven Solomon is the brain behind the psychedelic collage work, and Paul Grieco is the man behind the many public beefs snuck between pages of Riesling and Roditis. From the open lambasting of Sietsema to the “Who needs a glass of Riesling?” series—which includes none other than Miss Lohan pictured weeping in court with a Riesling tattoo on her forearm—the list is always armed with a laugh or two. Not to mention the effortless fun it is to picture Grieco wreaking havoc on his high school faculty, all in the name of entertainment. Plus, he’s Canadian.
What to drink: Beyond Riesling, the “cool white” and “smoking red wines” sections are always interesting and offer a good deal of wines under $50. By the glass: be adventurous and order by the taste.

Best All-Around: Gramercy Tavern
Juliette Pope, the NYC wine world’s queen of sorts, has been at Gramercy Tavern for almost 13 years (her evolution: cook>pastry chef>waiter>manager>sommelier), and the last 6 of those have been spent as beverage director. In that time, Pope has managed to create a list that truly has something for everyone. It satisfies the urge to drink something off the wall just as well as it does the urge to drink something traditional or New World. In other words, it manages to be populist without being predictable. The wines by the glass are always worth a visit, and the pricing here—as at all of the Danny Meyer outposts¬—is charitable.
What to drink: Riesling is also a strong suit here, and the prices are varied. The assorted whites page, as well as the native Italian, native Spanish, and assorted reds sections, have a high quirk factor and a preponderance of wines under $50.

Best Hair: Vinegar Hill House
Because if the wine list at Vinegar Hill House had hair, it’d be the best.
What to drink: Mostly natural wines here and all priced just a touch above retail. Come with an open mind and dig in to Southern France, the Loire, and Italy.

WineChap is a start up that seeks to foster more intelligent boozing by demystifying the culture that surrounds restaurant wine lists. Currently the site boasts more than 160 wine list reviews in New York City.
[Photo courtesy of Alto]