For a little Shitshow Week fun, Eater joined Damon Boelte, noted cocktail expert and head of the bar program at Frankies and Prime Meats, at TGI Friday's to sample a cross section of the chain's cocktail offerings. 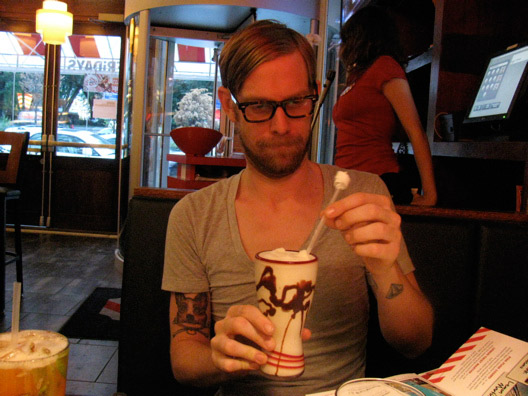 These days, you can't throw a dead pigeon in this town without hitting someone who fancies themselves a mixologist. Once any fresh-faced bartender figures out that Angostura bitters, that stained-labeled bottle collecting dust for the past 30 years in your Grandma's cupboard actually has a use, they are quickly on their way to becoming the next Jerry Thomas, Charles H. Baker or Hugo Ensslin. The modern classic cocktail bars of New York, Los Angeles, and even places like Austin, TX, are packed with bartenders and customers alike, striving to unearth the newest viral classic or modern technique that will set them apart from the increasingly saturated cocktail scene of dark wood bars and almost lightless rooms. But where do you go when you can no longer tolerate the too-cool-for-school staff and $18 Manhattan Cocktails?

I hadn't stepped foot into any chain restaurants for about a decade until Wednesday night when I found myself and a friend at TGI Fridays, Union Square. The much unwelcomed arrival of this monstrosity has had the people of Union Square up in arms for quite some time. We had heard rumors of the location purchasing and using fresh produce from the adjacent Union Square Greenmarket, but had our doubts and wanted to check it out ourselves.

Our first round of drinks (Pink Punk Cosmo and Lemon Twist Martini) arrived. Two Martini glasses were placed at the end of the table, each containing wads of not-so-fresh looking cotton candy, with the cocktail being poured over the top by our server, dissolving the fluffed sugar and coloring the drinks bright pink. Mine was supposed to be blue, but our waiter politely explained to us that they were out of blue cotton candy. I guess it's out of season at the greenmarket.

After two sips we moved onto the next round from their special menu of "Tea" drinks; the Soco Peach Tea, consisting of "Southern Comfort, sweet peach puree and sweet & sour, topped off with Pepsi." I was extremely excited about this one, because I had not tasted Southern Comfort since I was about 18 years old, and it was not a pleasant experience. But, I also had bad experiences with gin and tequila when I was much younger and now those are some of my favorites. The whole recipe seemed so ridiculous that it just HAD to work. Unfortunately, it brought up bad memories of my high school girlfriend, Angel Payne. No, seriously, that was her real name. Should've known better. 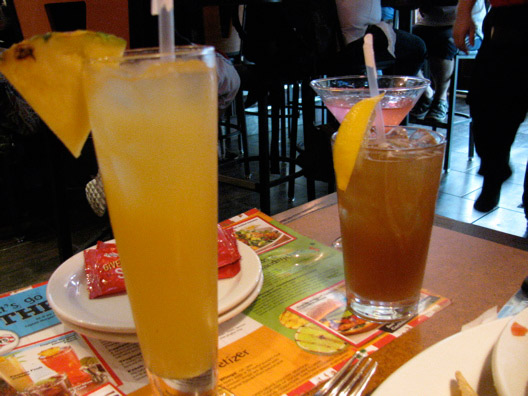 Moving on, we decided to test the classic cocktail knowledge of our bartender by ordering two old-school libations that everyone, not just bartenders should know; The Manhattan and The Old-Fashioned. Our waiter returned to inform us that they didn't have bitters, but he would run out and purchase some. We told him that that would be unnecessary and that we would order something else, but as we watched him return through the front door of the establishment with a black plastic sack, we knew what had happened. "A+ for effort, my man, but that's Campari," I thought to myself as we watched our drinks being made from across the room. 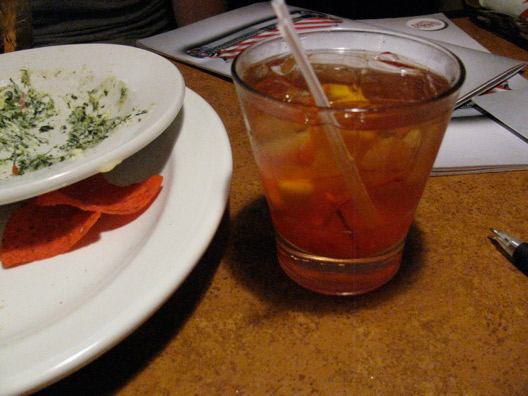 After a couple of sips, we moved on to the last drink of the night, The Mudslide. It seems as though most bars around the United States, specifically restaurant bars, have some sort of chocolaty frozen variation based on this spiked milkshake. This, along with drinks like the Long Island Iced Tea and the Cosmopolitan are the iconic, sugary cocktails of the 1970's and 80's that act as the anchors for TGI Fridays themed cocktail list, that in the end are essentially all about fun. And what's so wrong with that? This frosty mix of vodka, Kahlua and Baileys took me back to the days of fake I. D.s and hot summer nights and having sex in cars. Again, what's so wrong with that? 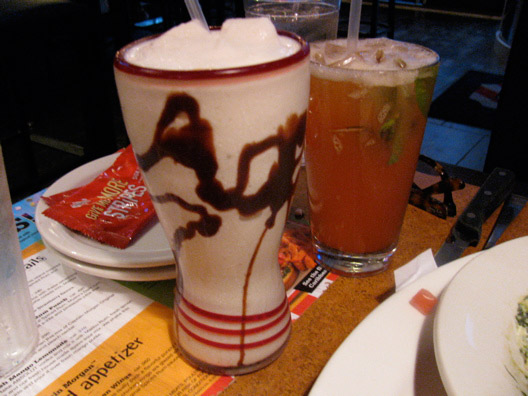 Our cocktails (if you can call them that), averaged about $7 or so, the service was decent and we got to escape the daily and nightly rituals of restaurant openings and speakeasy closing times and the only real cost was supporting a corporate sore thumb. In the end, there was no evidence of any procurements from the market across the street, or any other greenmarket for that matter. Will we return? We'll give it another decade.

Tasting Notes:
SoCo Peach Tea: Southern Comfort, sweet peach puree, sweet & sour and Pepsi. Had High hopes, let down hard. Tastes like cough syrup after you've smoked a cigarette, or vice versa. I can't help but think that this drink would've actually worked with a sweet whiskey like their other sponsored product Jack Daniels, instead of the whiskey liqueur.

Pink Punk Cosmo & Lemon Twist Martini (Cotton Candy Drink): Both "cocktails" would feel more at home as non-alcoholic sweet-sixteen sleepover-party punches. The Pink Punk has the closest-to-original-specs of all of the drinks, with (aside from the cotton candy) only one ingredient swapped out, pineapple juice for Cointreau. The Lemon Twist Martini is basically a Lemon Drop Martini over blue cotton candy, and tastes like what you might expect; lemony-sugary vodka. If you must pick one of the two, we agreed that the cosmo was the less offensive of the two.

Tropical Mai-Tai: Tiki drink enthusiasts like Adam Kolesar and Joe Desmond may blow their tops over any drink titled Mai-Tai that doesn't include the five original ingredients; A couple of rums, orgeat, curacao and lime juice. This mixture of spiced rum, pineapple and peach as I said before wasn't bad, but it was definitely no match for the original Trader Vic classic. I'm also growing curious of the heavy use of peach puree in cocktails on this menu at this point.

Tropical Berry Mojito Shaker: Not mentioned in the article above, this was a "one-sipper". At this point in the evening we were wrapping up, and honestly, my body couldn't handle the Bacardi rum, strawberries, mint, guava and passion fruit juice. I will note that the mint was fresh and there were actual strawberries used in this drink, making me wonder if these ingredients were sourced form the market across the street, according to claims.

The Mudslide: Its pretty hard to fuck up a milkshake. I mean, I was making them, unsupervised, with an old, rickety blender, when I was 6 years old. If a bartender can't whip up this mix of no-brainers like vodka, Kahlua, Baileys Irish Cream and ice cream and make it taste like the frozen confection for adults that it is, then God save us all. That said, the Mudslide was the highlight of our evening, and although I couldn't finish my Mojito Shaker, Amanda could tell that I had a slight case of food envy, and was kind enough to share.
—Damon Boelte
· All Shitshow Week 2010 Coverage [~ENY~]