Yesterday's Anatomy of a Shitshow post—offering 10 tips to help detect when a restaurant's train officially has exited the rails—has nothing on the curb appeal at Shang, the restaurant at the Thompson LES hotel. Strolling past Shang's doorway—tucked away on the Orchard Street side of the building, at the foot of a two-story staircase that then-NYT critic Frank Bruni termed "the first befuddlement and miscalculation I encountered" while awarding the restaurant one star early last year—several hours before we planned to dine, two insta-shitshow indicators alighted upon our eyes. One: the under-menu come-on so common to Murray Hill, bidding one to join for HAPPY HOUR on the TERRACE. Two: the small decorative pine tree cruelly ripped from its pot, lying prostrate on its side in the summer heat. If you didn't already have an inkling, now you do: we're entering shitshow territory here, people. Seatbelts: buckled.

To understand why we really wanted to return to Shang, however, it's useful to consult the tenth and final point in that Anatomy of a Shitshow list: "Absentee Celebrity Chef 'Partners.'" The celebrity chef in question here is Susur Lee, a man who built his reputation as a worker of avant-garde Chinese culinary glory in Toronto to the point where his arrival in NYC had (as Steve Cuozzo probably put it) the blabbering food blogger set (yes, that's us) pretty worked up. Flash-forward a year and half or so, and in the wake of middling reviews for Shang (and, to be fair, a physical space that's pretty close to unworkable no matter where one sets the banquettes), Lee was blaming the unimaginative palates of New Yorkers for Shang's apparent failure. Nonetheless, they're still serving food there. Which means one can show up there on a given night, and have dinner.

And so. Our party of five pulled up to the street-level door of Shang at 9:45 PM on a recent Thursday, the prone pinetree still on its side three hours since we'd first noted its plight. Up the double-flight stairs, then, and to the maitre'd stand, where, YES! This! 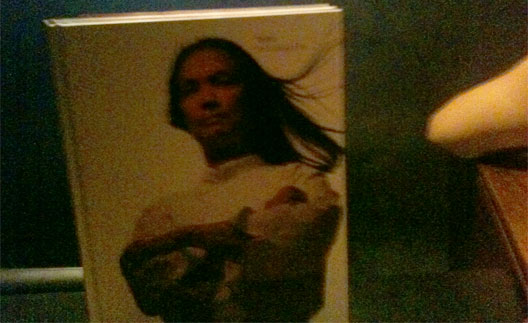 Susur! Dude! Looking good. This would be the last sign of the Top Chef Masters chef of the night, but it would not be the last of Top Chef.

Our lack of reservations wasn't a problem, and our group was escorted to a table in the half-full dining room. It was not just any table: glory be, the table happened to be one of the two that sits between the gigantic overhead light fixtures that Bruni and cohorts described as “papier-mâché breasts” and "rumpled old stockings." For the record: the breasts, still papier-mâchéd; the stockings, still rumpled.

We had to wait a couple minutes for the drink menus, which left a few moments for mobile phone-enabled diversions. For those who have not yet succumbed to Foursquare, one of the niftier features of the social networking tool is that it usually presents you with tips from other users when you check in to a venue. In these tips, people tend to call out dishes they recommend or experiences about the establishment they suggest you not miss.

Which is amusing insofar as when one of our dining companions checked into Shang on Foursquare, he received this tip: 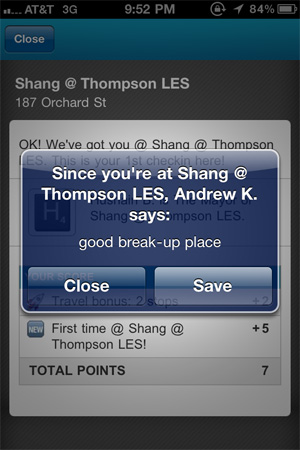 The drink menus came; drinks were ordered (and, later, sipped: on the whole, mediocre). From the food menu, we had our minds set on the Singapore Slaw appetizer, one of the restaurant's original signature dishes. And then, once we saw it, we knew we had no choice but to order what must certainly be Chef Lee's newest, greatest signature entree: Top Chef Curry Chicken. We let the waiter guide us to our other selections: salt and pepper calamari and lettuce-wrapped chicken for apps, and Cantonese-marinated skirt steak and Empress shredded chicken for our other mains.

Three minutes later, the drinks had not yet hit the table. But lo, here's the calamari! And the slaw! "They don't come out that fast at Chili's," noted one of our friends. Truth be told, all were fine, although there's something about the slaw that just demands to be, well, discerned. "It's non-food," one table-mate explained. "Like Dippin' Dots. Or Food of the Future."

Main courses proved more challenging. The steak, once unearthed from the crud piled atop it, was well cooked. The shredded chicken, not totally offensive. But oh, that Top Chef Curry Chicken ($26). Served in a too-long, narrow dish that easily overstretched the lazy susan embedded in the table center, the three distinct mounds of chicken sat atop piles of—hmm—soft polenta. The consistency of the chicken itself is worthy of scientific study, falling somewhere on the gooey-gelatinous side of the taste spectrum. But the taste of the dish was unmistakable: bad. In our case, gag-reflex-inducing bad (true). Notable quotables on the Top Chef Curry Chicken, from the folks around our table: "Upsetting." "Like Thanksgiving dinner in the Army." "Have you guys ever eaten anything from a tube?"

The Top Chef Curry Chicken debacle underlines the most heinous crime of Shang's: the myth that Susur Lee—by most accounts a genuinely talented (if bonkers) chef—still has anything remotely to do with the food that's being served here. Why the man would still allow his face to be represented at the entryway, or his association with reality television touted on the menu—is mystifying. Regardless, it stands as a straight-up embarrassment, and as good a signpost as any to what makes a Shitshow a Shitshow in the Year of our Lord Two-Thousand and Ten.

Having downed what essentially amounts to hotel food at a final tab, with tip (and two cocktails per person) of about $420, our crew made its way past the final astounding sight of the evening: a sleek, full-featured cocktail bar on the Lower East Side that, at 11:15 PM on a Thursday, stood completely, totally, 100% empty. Confirmed: good break-up place.

Back at street level, the tree still lay on its side. One member of our party couldn't take it any more, so he did what no one at Shang had done for the past five hours. He stood it back up in its pot. 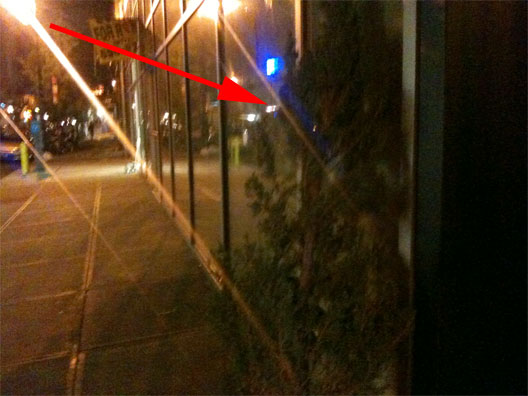 The Verdict: When is a shitshow not just a shitshow? When it's a Shangshow. Susur, please, get your name off the door here as soon as the contract allows.