As the Batali/Bastianich labor suit continues to grow in prominence, we asked lawyer, Eater contributor, and sometime restaurateur Adam Cohn to offer a brief legal interpretation of the case. He'll file as it progresses and will be around to offer insight into future legal restaurant world woes. 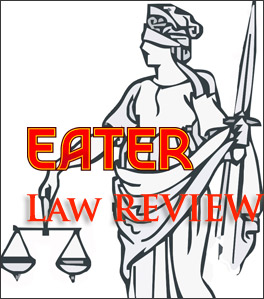 News broke last week that partners Mario Batali and Joe Bastianich have been hit with a class action lawsuit by employees for alleged violations of Federal and state labor laws at their restaurants. Among the allegations are that they underpaid hourly wages and dipped into the tip pool to pay sommeliers. Bastianich has promised to vigorously defend. Many will have already made up their minds as to their culpability, while some will wait to hear the evidence. Meanwhile, while we wait for the defense to respond to the complaint – by August 23 – interested observers ponder the following:

1. Is this suit merely a pirate raid on wealthy restaurateurs or is it an act of social justice?

Not mutually exclusive; could be both. To be sure, attorney Maimon Kirschenbaum - yarmulke wearing and bespectacled - makes for an unlikely buccaneer, but the wunderkind of the plaintiff’s bar has racked up an impressive number of wins/settlements by making the case to New York City restaurateurs that it’s cheaper to settle than fight. That said, we have to assume that Kirstenbaum has a good faith basis to file these claims – meaning that the pleading cannot be utter fiction or he’ll have his own problems with the courts.

But if these kinds of wage violations were committed, and if they were committed against as many similarly situated employees as plaintiffs allege, then this is the kind of case the class action statutes are designed for: to augment public enforcement of the labor laws by allowing groups of aggrieved employees to sue in a single case, and spur plaintiffs’ lawyers to action by providing for punitive (double) damages, as well as attorney’s fees and court costs.

2. If these labor law infractions were committed, why? Greed is not a sufficient answer for operators like Batali and Bastianich because we have to assume they—or their lawyers—are savvy enough to know that paying legal wages is cheaper than defending lawsuits. They are like a football team three touchdowns ahead coming into the second half; the last thing you want to do is start fouling. But operators, large and small, often struggle not to inadvertently violate labor laws because the laws are complex. It’s a bit like trying to drive thirty miles without committing some minor traffic infraction. So, for the reasons above, and because of the way Bastianich came out swinging, I’m going to assume that they have what they at least believe to be a valid defense to the allegations. The most interesting and not unlikely outcome of the case would be a finding that sommeliers are actually entitled to participate in the tip pool.

3. What’s next? The defendants have thirty days to either answer or respond with a motion to dismiss. The latter—where defendant argues the case does not allege a violation under the law—is the more likely because, who knows, you might catch a break, and more fun for us because we will get a better insight into the basis of their defenses. If the case isn’t dismissed, the restaurants will have to answer. Later, we might expect a challenge to the class certification, arguing the employees are not similarly situated and can only sue individually, or as a smaller class. This challenge is difficult, as Kirstenbaum knows what he’s doing, and the initial stage of certification is not that rigorous. But it may be a useful exercise in that, if it succeeds, plaintiffs will have reduced their damages liability by reducing the size of the class, and if not, at least it’ll get the plaintiff to start spending money. In a class action case, Kirstenbaum’s firm is footing the bill for this lawsuit and only recovers fees and expenses if he wins or gets a settlement. Its not at all clear that his war chest is bigger that Bastianich’s.
4. Whose going to win? Couldn’t say. Stay tuned.