Every day this week, we'll feature a Shitshow Week Review—a new assessment of a restaurant that at first glance seemed totally and completely off the rails. To give these places a fair shake, we revisited to pass new judgment. 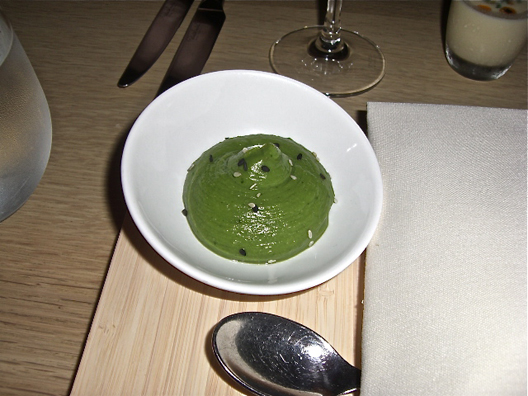 Rouge Tomate is a rebel in the New York City food world. It’s a splashy, expensive restaurant, with carefully timed, effortless service, and a menu that turns its back on current trends in Manhattan dining — namely the celebration of all things rich, savory, creamy and meaty. On a Friday night, the dining room was full of what can only be described as people who seem to be afraid of food. Those who, when presented with a thick, juicy cheeseburger and crispy French fries, might polish off the whole thing, but feel terrible about it afterwards. For this select group, Rouge Tomate offers a particular thrill: the opportunity to eat a gourmet multi course meal they can go to town on, knowing that no matter how much they consume they are not doing an injustice to their waistline, or their soul. Unfortunately for everyone else, the restaurant is a real drag.

The space is gigantic, full of clean, slick lines and large floral arrangements , which make it look like somewhere Eddie Murphy would take a date in Boomerang. At 9 PM the room was mostly populated with well-dressed young professionals, older couples sharing wine out of extravagant glass decanters, and several clusters of dolled up gals on large lady-dates. It had the feel of a busy restaurant, and yet, on the way to the bathroom downstairs, you see this: ?? 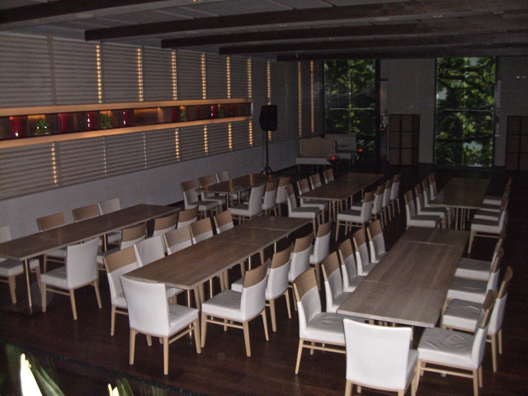 What is this area? It’s not sectioned off, it’s as big as the actual dining room upstairs, but there’s nobody in there. It looks like a bunch of small tables put together, and if you go onto the Rouge Tomate website, it’s the first picture you see. Is it a PDR? A dance floor? Do they roll out padded tables and do mass spa treatments? ?? 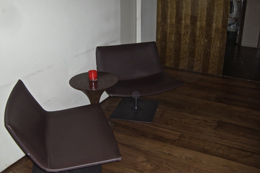 Also, there’s this weird hang out area by the bathroom (and In case you were wondering, the bathroom is also very strange: unisex, with a scary v-shaped stone sink where the water shoots directly at your crotch but gets caught, narrowly, by the lip of the basin, so that it flows downwards and away from you, just in the nick of time). ?? 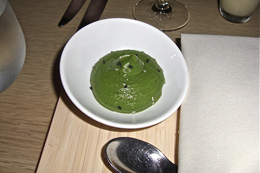 After ordering, this was the first thing to hit the table. It’s a broccoli spread served with warm, fresh baked walnut bread. The bread was good. But the spread — oh man. My dining companion found it properly inedible — couldn’t have more than a bite. I made my way through maybe a third of it, not because it tasted good, but because I wanted to pinpoint exactly what it reminded me of — a combination of broccoli, like you first had, ever in your life from a steam table at a school cafeteria, and an unexpected wheat grass shot. ?? 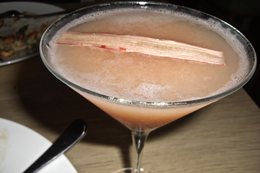 The drinks arrived, a bellini and a Rhubard Crisp made with rum, prosecco and various juices—emphasis on the juices. The bellini was a bellini, if a thin one, and the Rhubarb Crisp tasted like something you’d get at Jamba Juice. It’s worth noting that this was the *only* item on the cocktail list made with more than one kind of liquor (why I ordered it), and yet any trace of booze could be neither tasted nor felt. ?? 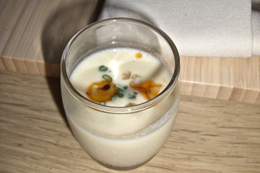 As an amuse, they give you this, a shot glass full of a New England style clam chowder. It was served room temperature and pleasantly creamy if a bit watery, and didn’t appear to have any clams in it. ???
Then the apps: ??My companion had the Summer Bell Pepper Crostini. This was actually okay. The flavor was similar to chips and guacamole. I had the Salad of Local Heirloom Squash, which was a pile of over moist veggies served warm, with under dressed greens, and a few gummy, falvorless balls of "Jersey Mozarella." I wished they had somehow chosen a better way to spend these precious few indulgent calories – an olive-oil rich dressing? Some shaved parmesean on top? A cluster of fried parsnips or artichokes? ???

The entrees: After taking one bite of the Berkshire Pork Loin a la Plancha, my companion remarked: “Tastes like the King’s Table,” a reference to a chain of cheap, kid friendly buffets in the Northwest (even if you haven’t been, I'm sure you know the type). She was dead right. Little smooth slivers of white meat, without any pleasurable fatty bits or crispy skin, coated in some kind of sweet apple glaze. It’s a preparation used to make bad meat taste good, and here, at a very adult quasi-gourmet restaurant, it tasted like round, simple kiddie fare. My entrée was a Sweet Corn Farrotto, a surprisingly salty and buttery grain, corn and tomato concoction. This wasn’t actually unpleasant for bite number one, but the dish simply lacked any diversity. Unlike a big bowl of mashed potatoes, creamy grits, or even buttered pasta, the fat kid inside wasn’t telling me to keep stuffing it in. The Sweet Corn Farrotto was gourmet gruel. 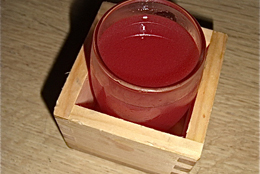 After dinner, you get a little 'palate cleanser' — a shot of watermelon juice in a sake glass. It was crisp all right, but at this point, we were totally juiced-out.
For the desserts, we had berry parfait that was a bit too similar to a yogurt and granola cup out of an ice bin at your local Midtown deli, and some kind of banana and peanut butter ice cream thing. The ice cream was fine, the bananas were mushy and coated in a thick, gross honey glaze.

The saddest thing about Rouge Tomate is that the room is actually kind of cool, and the service is really great. But if you don't have a taste for health food, the menu is not going to convince you that this kind of cuisine has the potential to be really, truly satisfying. Maybe if the kitchen paid a little more attention to picking the right flavors, and the finding right preparations, we might have a contender here, but as it stands...

Verdict: Shitshow if: you don't like eating earthy, weird health food in a drab, antiseptic environment. Not a Shitshow if: funky vegetables are your thing, and you want a nice, spendy Upper East Side night out.