Today's Shitshow Review is brought to you by Eater contributor and comedian Max Silvestri. 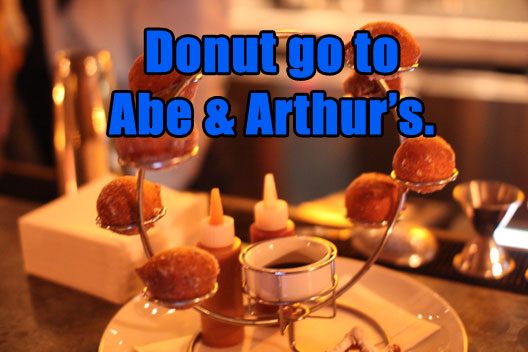 My first reaction to the sea of cigars, plastic surgery, dress slacks and yellow silicone gel charity bracelets that welcomed me at the entrance of Abe & Arthur’s was to text our fine editor Amanda Kludt a bunch of swear words. The text didn’t send, because I have an iPhone and it doesn’t do things like that, but the sentiment stands. What a shitshow.

Located on 14th Street in the Meatpacking District, the space used to house a club called Lotus, but let’s be real: it is still a club. It is dark and there is loud music and people not quite pretty or tall enough to be models go there to get guys with thin hair to buy them overpriced liquor because their dresses are small.

After pushing through the throngs of VERY cool people on the sidewalk, the giant bouncer stopped me. It was 9 PM on a Thursday night. “Can I help you?” I told the bouncer I was looking to dine alone and a gigantic and expensive multistory restaurant seems like the sort of place that could handle that. “We are booked solid through 11, sir.” (I don’t remember if he called me “sir,” but I’m being generous.) I persisted, and he told me I could probably get a seat at the bar upstairs. What a chill guy.

There was room for exactly one at the bar, and the bartender was very nice. She seemed to detect that maybe I wasn’t at the restaurant purely for purposes of smirking at and/or trying to hatefuck women, so she was attentive and funny. She thankfully talked me out of buying a cocktail that was Jameson whiskey, simple syrup, and Cinnamon Toast Crunch-infused milk. I guess that sounds like a fun play on the sort of drink you’d give a child during the Depression to make it fall asleep “Um, it’s milky, and sweet. “ No thanks!

I ordered tuna tartare tacos: the tuna tartare was fine, but it came served with unappetizing miniature-sized versions of Ortega hard taco shells. (The traditional staleness remained full-sized.) The porterhouse with truffle butter was a totally fine steak (Correction: Max ordered the NY strip steak). I ordered it rare/medium-rare, and when it came out on a sizzling plate, the bartender gave me a side plate. “You should move the steak pieces to that so they stop cooking.” That is very thoughtful, but also what a cumbersome way to have a forty-dollar steak served to you. I liked the succotash because it had cream and bacon, and I am not complicated. Amanda insisted I order the DIY donuts for dessert. The dessert was a metal ring of sugar-dusted donut holes into each of which you violently inject either cherry or caramel filling. You can dip them in melted chocolate if you want, which I did. It is not a dessert meant for one person, but boy I showed them.

The above meal was fine, but absolutely not worth its ridiculous cost. But what almost made the price of admission worth it (almost) was the revolving door of shitheads that surrounded me at the bar and talked loudly enough for me to hear. On one side were a bunch of finance guys overwhelming a squeaky voiced female summer intern, on the other side a vodka sales rep trying to impress a new investor who clearly hated vodka. I spent the whole meal writing things down in my notebook, as the conversation was far more interesting than the meal. To end my review, here are some select quotes, verbatim.

"Private equity."
"I’m an intern there for the summer, then I’ll be back at USC for my senior year."
"You want it on the rocks? Oh man, you’ve never had vodka!? You gotta have it in a martini. Perfect."
"Were you my bartender? I barely remember."
"Haha, he mostly drinks wine."
?"If you’re going to own a piece of the company, you have to have at least a taste."
"I got a lot of offers from the big firms, but I chose something small."
"We’re gonna do a citrus vodka, a coffee, and a cinnamon."
"Hypothetically, if somebody says 'vodka soda,' what do you pour? You ever pour Vision?"
"I have to drink it dirty, otherwise it’s too much."
"The 95? It’s spectacular. It’s super buttery."
"It’s really, really intense."
"Where do you usually go out?"
"I mean, it’s like, I own a manufacturing company."
"Dude, I thought you were like a big-time London consultant."
"I took that drink off your bill. You were forced to take it."
"I really want to go to Morocco! It was nice to meet you."
"Can I get a vodka soda?"
"I deal with vendors all the time."
"I’m talking serious, intense, just-off-the-boat Pakistani restaurants."
"Please, I’d pay for it with Vision."
"Vodka soda, please."
"It smells like brunch?"
"I feel like it’s ripping apart the lining in my stomach."
"It wakes you up, right?"
"Can I please try the stuffed donut dessert?"
"Making spirits is more complicated than missiles."
?"It’s like a little zit."
"Oh, a s’more? It’s really cool. You put a marshmallow and some chocolate between graham crackers and then you heat them over a fire, so they get a melty. I know!"
"Hey, what’s the smoothest vodka in the world?"
"Take us back to where? My place?"
"Two vodka sodas please."
"Why is Vision vodka the smoothest vodka in the world? That’s like saying why is diamond the hardest?”
—Max Silvestri
· All Shitshow Week 2010 Coverage [~ENY~]