Rino Ceronte, Mercat Negre, Mai, The Back Page All Shutter

Share All sharing options for: Rino Ceronte, Mercat Negre, Mai, The Back Page All Shutter 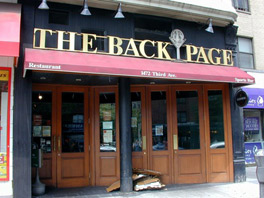 1) Greenwich Village: Bowery Boogie reports that MacDougal Street's Rino Ceronte has closed. It was owned by the same man who owned Super Hotdog, Food Fight, and Red Basket nearby. Now all are closed. [BB]

2) East Village East Village Feed notes that the Red Mango on St. Marks Place—the one right across the street from a Pinkberry—has closed. According to a rep, "The St. Mark’s location no longer meets our long-term goal." [EVF]

3) Boerum Hill: From the tipline: "I live nearby, but Mai on Atlantic Avenue closed suddenly last week. One day they said they were closed for a private party, then the paper went up and then gone. Great stuff, but low foot traffic block so it makes sense." [ShutterWire]

4) Upper East Side: Another one from the tipline: "The Back Page on the Upper East Side is closed. Walked by and space is gutted. Easily the best chicken wings and noisiest sports bar in town. Also, long-time Indian – Mumtaz - closed and gutted." [ShutterWire]

5) Williamsburg: Grub Street reports that Mercat Negre, the Williamsburg spinoff of the Noho Spanish spot, is closing on September 5, less than a year after it opened. The owners will reopen it later in September as a new concept. [GS]

6) East Village: EV Grieve notices that Mission Cafe in the East Village is on the market. It's still open, but it may not be for long should someone take over the lease. [EVG]

7) Financial District: A reader writes in to report that the Seattle Coffee Roasters on John Street in FiDi has closed. It's becoming another branch of hummus chain Chickpea. [ShutterWire]
[Photo credit]