To get everyone through the dog days of summer, we've asked our readers to tell us about a favorite, somewhat oddball restaurant, bar, or place of note that perhaps exists mostly off the radar. We've been running submission throughout the week. Please send in further recs to tips@eater.com. 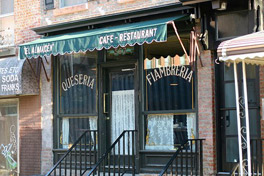 Pyramida, 1402 2nd Ave., Upper East Side
You can argue the merits of a $4.50 lemonade, but Pyramida's tart cooler easily ranks among the city's best for its inclusion of grated lemon peel, which gives the drink a depth of flavor that's a far cry from Country Time. This former hole in the wall (they recently moved to a proper restaurant space with creamsicle-colored walls and sea blue banquettes) has ramped up their operation, offering a wider selection of Middle Eastern specialties like crisp falafel or spiced lamb stuffed inside fluffy pitas. For the UES, you'd be hard pressed to find a cheaper substantial meal ($10 for falafel and a lemonade). They also have excellent prepared vegetable sides with moist dolmades and something called Pumpkin Gloria, a dish of mashed, spiced gourd that balances salty and sweet so well you could call it Sam Mason. It gets overshadowed by downtown players like Mamoun's and Taiim, but it's worth stopping in.
—Zachary

El Almacen, 557 Driggs Ave., Williamsburg
I drink shitty Malbec at El Almacen. Yeah, that’s right. And it’s warm. I also eat blood sausage in the middle of August on the covered patio when the atmosphere is having one of its nervous breakdowns. And I do it all for the feeling of being somewhere else. I don’t think it’s Argentina—the place from which the restaurant draws its primary inspiration—though maybe it is; I’ve never been there. It’s just that general feeling of somewhere else—a place where excessive perspiration and meat eating collide near a beach that isn’t covered with trash and topless Russian men in track pants (not that I don’t love Brighton Beach for that). I trek five blocks for that feeling of otherness, well, that and the Entraña.

El Almacen isn’t unknown; rumblings of Julian Medina’s alleged involvement created buzz from the beginning, and the spot has a devoted following among neighborhood folk. Still, it doesn’t make Manhattanites tumble off the L train, though it should. In proper Argentine form, almost anything land dwelling that’s grilled is good. But what’s great is the ever-consistent Entraña: an 18 oz. skirt steak served with blistered, gloriously salty Shishito peppers, chimichurri, and Poblano mashed potatoes; at $18, it’s one of the best steaks in the city for the coin.

The rest of the menu draws from both in and out of South America, often finding itself in Mexico a lá a short roster of tacos—when in season, the soft shell crab duo could make Baja green—ceviches, the requisite guacamole, and a Poblano pepper stuffed with Cotija cheese, corn, and black beans. Spain gets a nod with an excellent Paella.

The sangria fails—as sangria generally does—but the beer is cold. The Huevos Rancheros at brunch with a side of those same Shishitos pairs precisely with a Michelada and is also best consumed in heat. The waitstaff is always bubbly, though customarily spacey, and the food comes fast and all at once, but who cares? The steak is perfect, and the beach is just down the block.
—Talia

Il Passatore, 14 Bushwick Ave., Williamsburg
This sweet, little hole in the wall space on an ugly stretch of Bushwick Ave,. just two blocks from the Graham Avenue stop serves some of the most affordable and excellent homemade pasta around. It's like East Williamsburg's Lupa, but minus the great meat and entrees. They have the occasional good ap or salad but go here for the $8 - 14 large portions of pasta, especially their excellent bolognese.
—Jamie

I agree that Tuck Shop is great but not for the obvious reasons, ie, meat pies. As a vegetarian, I love the veggie pies just as much as their vegetables sides. Especially the salad made with roasted beet dressing and the potato salad that is not mayo driven. Love the eye candy too!!!
—Doris
[photo credit]