Share All sharing options for: The Door Report: The Five Hardest Doors In New York City

Welcome back to the Door Report, the Eater feature that will give you the skinny on the toughest doors in New York City. The Fall is prime time for new club openings, so this list is guaranteed to look very different in a matter of weeks. If you have a suggestion for the Door Report, please do let us know. 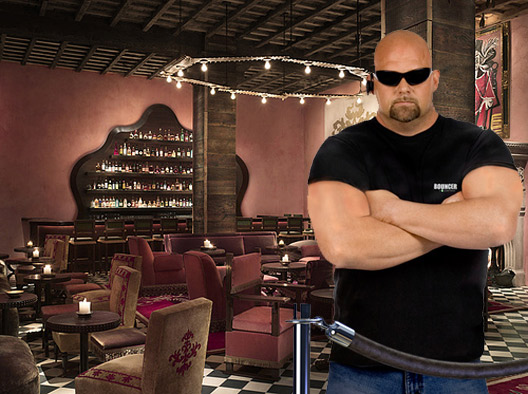 1. Provocateur - Owner Mike Satsky takes pride in having a club that rejects most potential customers every night. He may even enjoy what happens outside the door than inside, unique for someone in his position. The club's design and house music tendencies aren't for everyone, which is a good thing based on the door policy, something we experienced ourselves one nightwhen Mistress Sheena gave us the old "not tonight" line. Satsky apologized profusely to us for the rough treatment, but now we know how the majority of people feel.
Who you need to know: Mike Satsky, Brian Gefter, Kyky, Dimitri, Sheena
Civilian Chance of Entry: 1%*

2. The Boom Boom Room: The penthouse glam palace may have been closed for most of the summer, but it still deserves a spot in the heart of the list. Before the summer break, the Boom had transitioned to iPad's to handle the guest list, the first NYC club to use the technology to ensure that only the "right people" ever get upstairs to listen to disco funk and sip $30 drinks. Andre Balazs and company are prepping to re-open Le Room de Boom in time for Fashion Week, and will most likely be converting the lounge into a member's only operation. Unfortunately, private clubs aren't eligible for the list, so this is most likely the last time the Boom Boom Room will ever be included. Thanks for playing.
Who you need to know: Andre Balazs, Kamil Parchomienko
Civilian Chance of Entry: 2%
848 Washington St., MePa.

3. Kenmare: Nur Khan and Paul Sevigny's Italian restaurant may not be a favorite of certain food critics, but the restaurant's downstairs lounge is doing a nice job of keeping the restaurant busy late into the night. The small space doesn't have thecapacity to let too many people inside, which keeps things on the intimate side. In an effort to minimize street noise, the door decisions are made inside the restaurant, which creates a bit of a chaotic scene. Expect this place to stay hot through the rest of the year.
Who you need to know: Nur Khan, Paul Sevigny, Megan Ronney
Civilian Chance of Entry: 4%
98 Kenmare Street, Nolita

4. The Jane Ballroom: Dropping several spots is the Jane Ballroom, the once troubled hot spot that briefly occupied the top spot last time around. During its original run, the Jane benefitted from a lack of competition. The Jane 2.0 now competes with places like Le Bain and Kenmare for customers, and will be under further pressure when Le Baron and Matt Kliegman and Carlos Quirarte's mysterious Club Mystique strip club project opens later this year. It also a matter of size: The Jane is a huge room compared to other hot spots, so it takes a larger amount of people to reach a critical mass in the Ballroom. But things are still tight as they manage their community issues, helping keep the Jane on the list.
Who you need to know: Eric Goode, Sean MacPherson, Matt Kliegman, Carlos Quirarte, Angelo Bianchi
Civilian Chance of Entry: 13%
113 Jane St., West Village.

5. SL Lounge: Hanging tough at #5 is SL (formerly Simyone), the lounge beneath Abe and Arthurs. Eugene Remm and Mark Birnbaum are still running a smooth ship almost a year after opening. SL has been getting a lot of gossip column attention recently from the bold face names who often head downstairs after a meal at the restaurant. Is that a sign that they are looking for publicity? The group is also working on its top secret Abe and Arthur's expansion plan and their new seafood concept, which could pull customers away from SL. Something to watch going forward.
Who you need to know: Eugene Remm, Mark Birnbaum, Aalex Julian
Civilian Chance of Entry: 21%
409 W 14th St., MePa.